In this May 16, 1997 file photo, Albert Roux poses for a photo. Roux, the French-born chef and restaurateur who along with his late brother Michel had a profound influence on British dining habits, has died. He was 85, it was reported on Wednesday, Jan. 6, 2021. The brothers are widely credited with revolutionizing Britain’s staid and old-fashioned culinary scene, notably with their opening of Le Gavroche in London in 1967, a restaurant that was frequented by a loyal clientele that included many of the icons of the Swinging Sixties in London. (PA via AP, File) 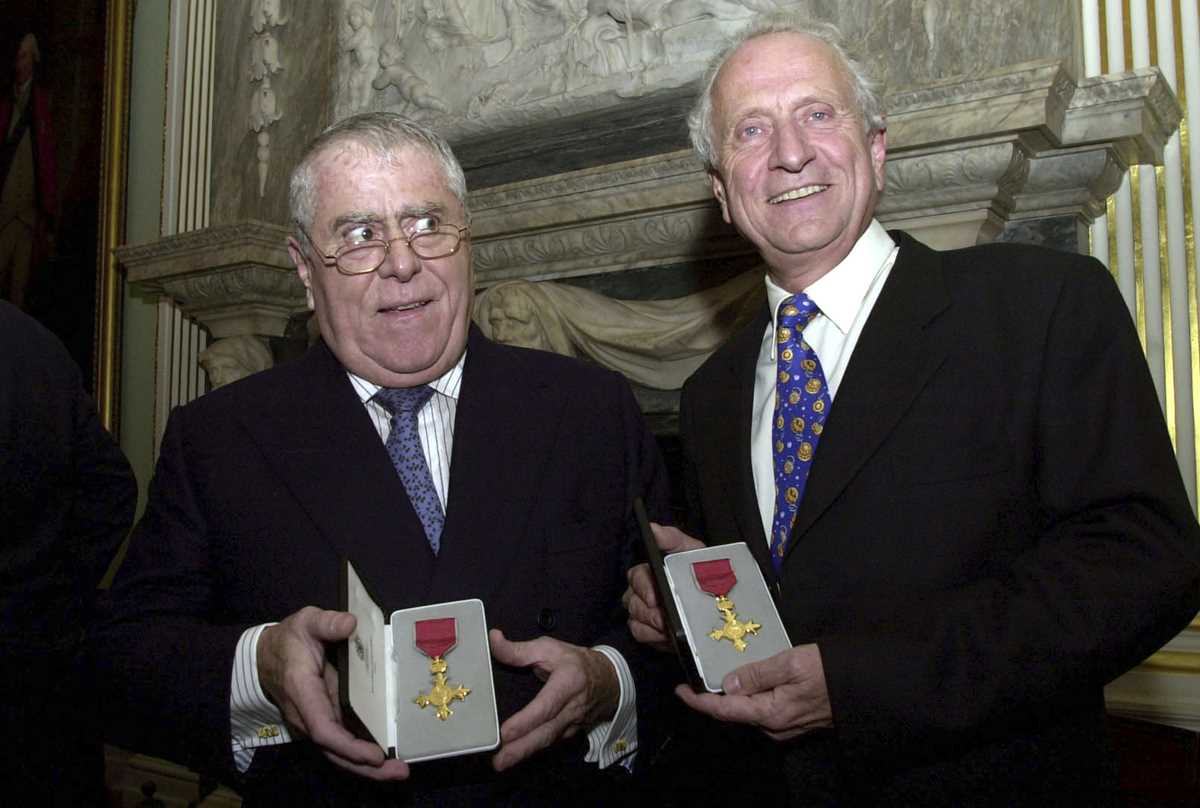 In this Oct. 31, 2002 file photo, Albert, left and Michel Roux display their honourary OBE medals presented to them by the British Foreign Secretary Jack Straw, on behalf of Britain’s Queen Elizabeth, at a ceremony at the Foriegn and Commonwealth offices in central London. Albert Roux, the French-born chef and restaurateur who along with his late brother Michel had a profound influence on British dining habits, has died. He was 85, it was reported on Wednesday, Jan. 6, 2021. The brothers are widely credited with revolutionizing Britain’s staid and old-fashioned culinary scene, notably with their opening of Le Gavroche in London in 1967, a restaurant that was frequented by a loyal clientele that included many of the icons of the Swinging Sixties in London. (Johnny Green/PA via AP, File)

LONDON (AP) — Albert Roux, the French-born chef and restaurateur who along with his late brother Michel had a profound influence on British dining habits, has died at 85.

Roux died Monday after being unwell for a while, his family said in a statement Wednesday. The family did not reveal the location or cause of death.

In 1982, the brothers’ restaurant in London, Le Gavroche, became the first British restaurant to be awarded three Michelin stars, testament to its pioneering role in turning the capital’s culinary scene from one devoid of innovation into one of the world’s most intriguing gastronomic melting pots.

From Le Gavroche’s launch, a loyal clientele that included many of the icons of the swinging ’60s frequented the restaurant. The brothers took turns in the kitchen and dining room, seeking “to achieve a global reputation for service and the quality of their cuisine.”

Over the years, well-known chefs such as Monica Galetti, Gordon Ramsay, Marcus Wareing and Marco Pierre White earned their stripes at the restaurant that continues to serve classic French haute cuisine in the well-heeled Mayfair neighborhood.

Although it lost one star in 1993, Le Gavroche, which is now run by Albert’s son, Michel Jr., is still considered one of London’s most coveted places to dine, and its reopening after the coronavirus pandemic is awaited by many.

“He was a mentor for so many people in the hospitality industry, and a real inspiration to budding chefs, including me,” said Michel Roux Jr.

Albert Roux was born in 1935 in the village of Semur-en-Brionnais in the central French region of Burgundy. After World War II, the family moved to Paris to run a new charcuterie and it was in the French capital where both brothers really forged their passion for cooking.

At 14, Albert became an apprentice pastry chef, and four years later he moved to England where he soon found work at the French Embassy. After his military service in Algeria, Albert Roux became deputy head at the British Embassy in Paris.

When he returned, along with his brother, to Britain in 1967, they brought their classical skills, particularly in pastry-making, to a restaurant scene that was old-fashioned and staid. The legendary La Gavroche was created, appealing to those who wanted to broaden their culinary horizons.

In addition to Le Gavroche, the brothers opened a series of other successful restaurants. In 1972, they stumbled upon the Waterside Inn, a shabby old pub in Bray-on-Thames, west of London, which they turned into their flagship restaurant outside the capital.

In 1985, the Waterside Inn received its third Michelin star. It is the only restaurant in the world, outside France, to have retained three stars ever since.

The brothers separated their business interests in 1986, with Albert choosing Le Gavroche whilst Michel took control of The Waterside Inn.

In 2002, the brothers were awarded the Order of the British Empire honor by Queen Elizabeth II for their contributions to the field.

The Michelin Guide tweeted that Albert Roux, along with his brother who passed away last year at age 78, “was a father of the U.K. restaurant industry and his legacy will live on through the many chefs who passed through his kitchen.”

The Roux Scholarship, a cooking competition for up-and-coming chefs set up by the brothers and now run by their sons Alain Roux and Michel Roux Jr, said Albert Roux’s legacy “will live on in the thousands of chefs he inspired and trained.”

“He famously said that, like cigarettes, it should carry a warning about the hideous suffering of the ducks and geese abused for its production,” the group said on Twitter. “We’ll never forget him.”

15 Energy Stocks Analysts Love the Most

There are more than 450 energy companies traded on public markets. Given the sheer number of pipeline companies, power plant operators, oil and gas production companies, and other energy stocks, it can be hard to identify which energy companies will outperform the market.

Fortunately, Wall Street’s brightest minds have already done this for us. Every year, analysts issue approximately 8,000 distinct recommendations for energy companies. Analysts don’t always get their “buy” ratings right, but it’s worth taking a hard look when several analysts from different brokerages and research firms are giving “strong-buy” and “buy” ratings to the same energy stock.

This slide show lists the 15 energy companies with the highest average analyst recommendations from Wall Street’s equities research analysts over the last 12 months.

View the “15 Energy Stocks Analysts Love the Most”.

The Latest: Shanghai locks down 2 major hospitals over cases

The Latest: Short on bed space, Brazilian state locks down

Bitcoin Outlook: My Mantra for 2021 Can Make You Money

I have a new mantra for 2021: Source: Shutterstock Buy