In this undated file photo provided by the U.S. Fish and Wildlife Service, caribou from the Porcupine caribou herd migrate onto the coastal plain of the Arctic National Wildlife Refuge in northeast Alaska. The U.S. government held its first-ever oil and gas lease sale Wednesday, Jan. 6, 2021 for Alaska’s Arctic National Wildlife Refuge, an event critics labeled as a bust with major oil companies staying on the sidelines and a state corporation emerging as the main bidder. (U.S. Fish and Wildlife Service via AP, File) 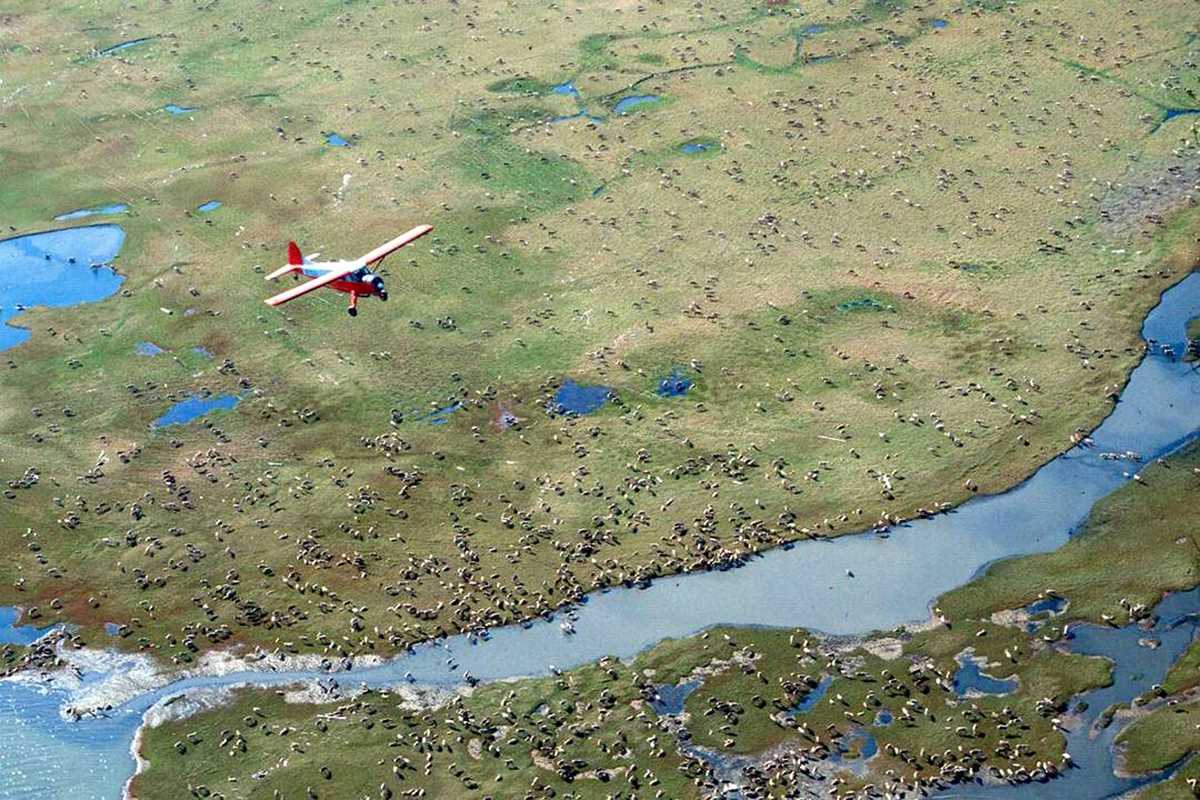 In this undated file photo provided by the U.S. Fish and Wildlife Service, an airplane flies over caribou from the Porcupine caribou herd on the coastal plain of the Arctic National Wildlife Refuge in northeast Alaska. The U.S. government held its first-ever oil and gas lease sale Wednesday, Jan. 6, 2021 for Alaska’s Arctic National Wildlife Refuge, an event critics labeled as a bust with major oil companies staying on the sidelines and a state corporation emerging as the main bidder.(U.S. Fish and Wildlife Service via AP, File)

JUNEAU, Alaska (AP) — The U.S. government held its first-ever oil and gas lease sale Wednesday for Alaska’s Arctic National Wildlife Refuge, an event critics labeled as a bust with major oil companies staying on the sidelines and a state corporation emerging as the main bidder.

The sale, held as scheduled after a judge Tuesday rejected requests by Indigenous and conservation groups to halt the event, garnered bids on half the 22 tracts that were listed as available in the refuge’s coastal plain. The U.S. Bureau of Land Management, which held the sale, said the bids were under review.

The rugged remote area off the Beaufort Sea is considered sacred by the Indigenous Gwich’in. Critics of the lease sale say the region is special, providing habitat for wildlife including caribou, polar bears, wolves and birds, and should be off limits to drilling.

Supporters of drilling have viewed development as a way to bolster oil production, generate revenue and create or sustain jobs.

A state corporation, the Alaska Industrial Development and Export Authority, was the sale’s main bidder. Its executive director, Alan Weitzner, in a statement, said in acquiring nine tracts, “Alaska preserves the right to responsibly develop its natural resources.”

Members of the state’s congressional delegation, in a statement released by the land management agency, lauded the day as momentous. Gov. Mike Dunleavy, on Twitter, called the lease sale “historic for Alaska and tremendous for America.”

“Alaskans have waited two generations for this moment; I stand with them in support of this day,” he said.

Kate MacGregor, a deputy Interior Department secretary, said the sale marked, in part, the Trump administration’s commitment to working “to fulfill the goal of U.S. energy security for decades to come.”

“And when it comes to Arctic national security, today’s sale will further demonstrate the United States will have a long-term economic presence,” she added.

It was not clear heading into the sale what level of interest there would be among companies. A number of banks had announced plans to stop lending to projects in the Arctic, and President-elect Joe Biden has expressed opposition to drilling in the refuge.

While U.S. District Court Judge Sharon Gleason on Tuesday refused to halt the sale, she has yet to rule on underlying lawsuits challenging the adequacy of the environmental review process undertaken by the federal government.

Chad Padgett, the U.S. Bureau of Land Management’s Alaska state director, defended the review process Wednesday as rigorous and disputed critics’ claims that the sale had been rushed. He called the sale a success.

The land management agency has said under an “optimistic, aggressive hypothetical scenario” exploration could begin within two years after a lease sale, with production eight years after a sale.

Kara Moriarty, president and CEO of the Alaska Oil and Gas Association, said while the sale’s results “may not have been as robust as we might have expected, industry still supports future access to this area.”

“Today’s sale reflects the brutal economic realities the oil and gas industry continues to face after the unprecedented events of 2020, coupled with ongoing regulatory uncertainty,” she said in a statement.

Adam Kolton, executive director of Alaska Wilderness League, called the sale “a huge embarrassment” for Alaska’s congressional delegation, which supported the decades-long push to open the coastal plain to drilling, and to President Donald Trump’s administration.

“Essentially, the Trump administration had a party, hoped the oil industry would show up, and it didn’t,” he said. Kolton called the sale the “death knell for anybody who’s arguing that this is going to be an oil, jobs and revenue bonanza. I mean, they’ve just been unmasked.”

When a single Wall Street analyst downgrades one of your stocks, you might think they are just having a bad day or have an incorrect investment thesis. One downgrade typically won’t have a significant impact on the price of one of your stocks, but what if analysts repeatedly downgraded a company over the last 30, 60, or 90 days? You would know something is seriously wrong.

Today, we invite you to take a free exclusive look at our up-to-the-minute list of 12 “Most Downgraded” stocks. These are true strong sell stocks. Analysts are abandoning them in droves and issuing rare downgrades and sell ratings. If any of these stocks are lurking around in your portfolio, seriously consider whether or not they still belong in your portfolio.
.

View the “Analysts Hate These 12 Stocks”.

With a nation in crisis, pressure builds on Biden to deliver Reuters via biedex.markets

People are reflected on the electronic board of a securities

Crude oil prices are rallying, even as the IEA estimates