Football fans wait for kickoff in the sports betting lounge at the Ocean Casino Resort on Sept. 9, 2018, in Atlantic City, N.J. On Wednesday, Jan. 6, 2021, New York’s governor did an about-face and embraced mobile sports betting as a way to deal with financial losses from the coronavirus pandemic, and a company that tracks gambling legislation and performance predicted revenue from legal sports betting could reach $3.1 billion in 2021 and as much as $10 billion within five years. (AP Photo/Wayne Parry) 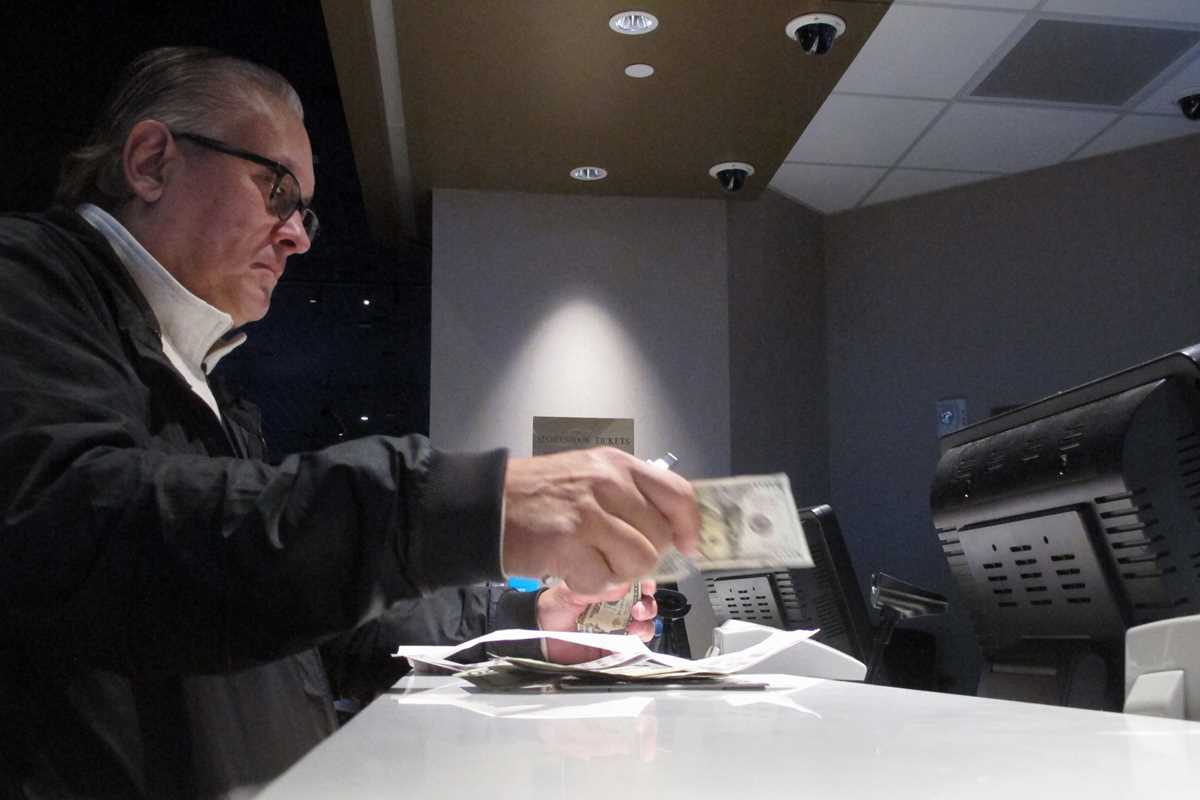 A gambler makes a sports bet at Bally’s casino in Atlantic City N.J. on Jan. 29, 2020. On Wednesday, Jan. 6, 2021, New York’s governor did an about-face and embraced mobile sports betting as a way to deal with financial losses from the coronavirus pandemic, and a company that tracks gambling legislation and performance predicted revenue from legal sports betting could reach $3.1 billion in 2021 and as much as $10 billion within five years. (AP Photo/Wayne Parry) 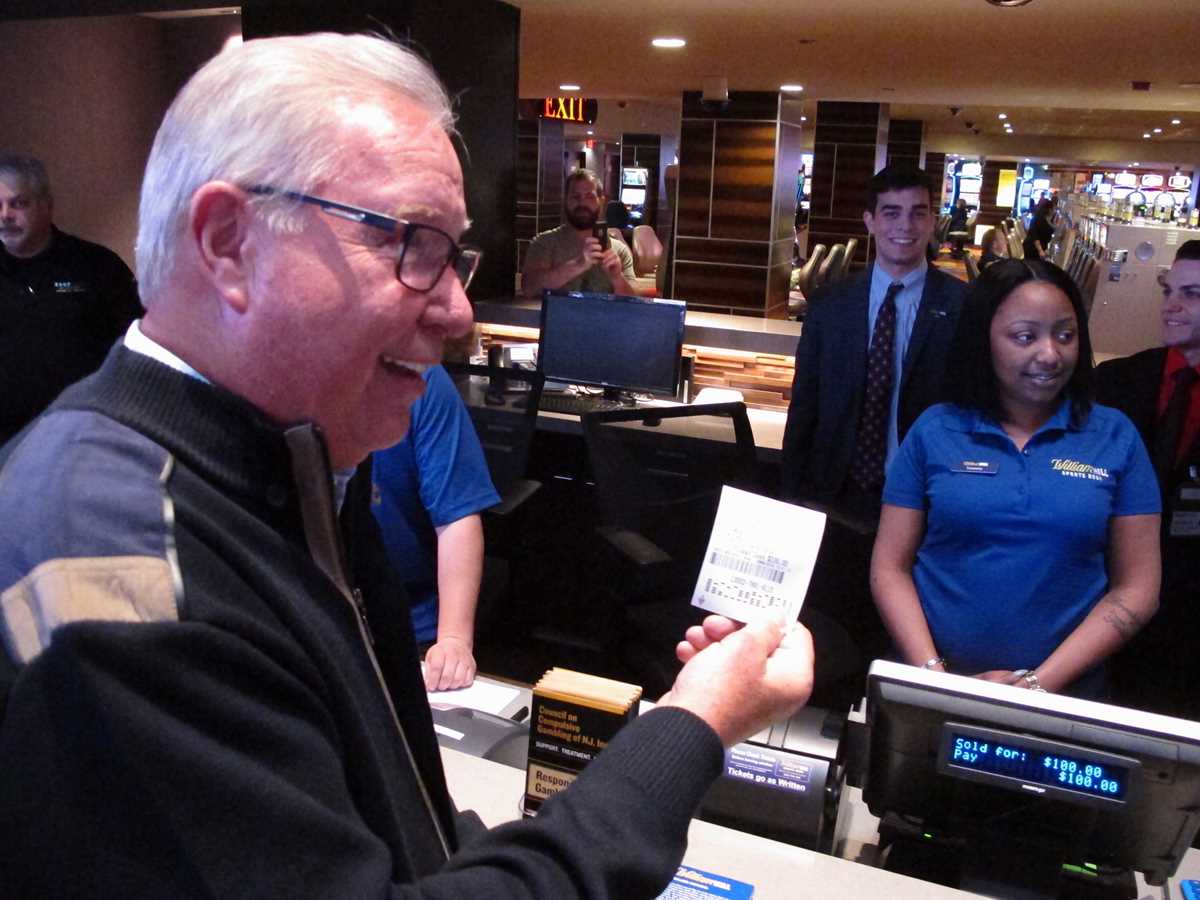 Former Philadelphia Eagles quarterback Ron Jaworski makes a sports bet at the Tropicana casino in Atlantic City, N.J. on March 8, 2019. On Wednesday, Jan. 6, 2021, New York’s governor did an about-face and embraced mobile sports betting as a way to deal with financial losses from the coronavirus pandemic, and a company that tracks gambling legislation and performance predicted revenue from legal sports betting could reach $3.1 billion in 2021 and as much as $10 billion within five years. (AP Photo/Wayne Parry)

ATLANTIC CITY, N.J. (AP) — On a day when New York’s governor did an about-face and embraced mobile sports betting as a way to deal with financial losses stemming from the coronavirus pandemic, a company that tracks gambling legislation and performance predicted that revenue from legal sports betting could reach $3.1 billion in 2021 and as much as $10 billion within five years.

VIXIO GamblingCompliance issued a report Wednesday projecting that at least six and as many as 14 additional states will legalize or expand sports betting in 2021. That fits with projections by numerous analysts that nearly half the country may have legalized sports betting by the end of this year.

The company estimated that revenue from sports betting would reach $2.6 billion to $3.1 billion this year, an increase of as much as 100% over the $1.55 billion it estimates will have been generated from sports betting in 2020 (December figures have not yet been reported from most states).

The report came as New York Gov. Andrew Cuomo reversed his long-held opposition to mobile sports betting, opening the possibility of a lucrative new market in one of the nation’s most populous states. It also could take a big bite out of New Jersey’s leading position in the national sports betting market; about 20% of New Jersey’s sports bets are placed by New Yorkers crossing the state line.

“At a time when New York faces a historic budget deficit due to the COVID-19 pandemic, the current online sports wagering structure incentivizes a large segment of New York residents to travel out of state to make online sports wagers or continue to patronize black markets,” he said. “New York has the potential to be the largest sports wagering market in the United States, and by legalizing online sports betting, we aim to keep millions of dollars in revenue here at home, which will only strengthen our ability to rebuild from the COVID-19 crisis.”

He called on the New York State Gaming Commission to issue a request for proposals to select and license a sports operator or platform to offer mobile sports wagering in the state.

“New York has always been the critical, strategic and much-anticipated component of any U.S. online gambling agenda, and it represents one of the top three states in terms of economic potential,” he said. “It’s no surprise that this is moving on the back of budget deficits in states like New York, and I think it’s a great way of bringing tax dollars from offshore operations to the city and state coffers.”

Likewise, Adam Greenblatt, CEO of BetMGM, said his company is eager to enter New York’s expanded market, saying Cuomo’s move “has the potential to bring leaking tax dollars back to New York from offshore books and nearby states.”

“Gov. Cuomo’s embrace of mobile sports betting immediately positions New York to soon lead all other states and generate significant revenue for state coffers,” she said. “New York, with a population of nearly 20 million, dwarfs any other state with legal betting and should have no problem regularly topping $1 billion a month in wagers.”

New York, like most states, expects to have a smoking crater where its budget used to be due to the economic impact of the coronavirus pandemic. That is expected to play a large part in additional states considering or enacting sports betting legislation this year.

The report predicted an aggressive campaign to legalize online sports betting in Texas this year, with team owners allied with DraftKings, FanDuel and BetMGM to press for legalization. That would require a constitutional amendment and a stateside referendum.

It forecast renewed legislative efforts to enact sports betting in Massachusetts, Georgia, Ohio and North Carolina, among others, while noting that sports betting efforts in Florida and California remain complicated by the impact they would have on tribal gambling operations and rights.

Millions of Americans will be receiving $600 as part of the stimulus bill that President Trump signed on December 27, 2020. Many already have. At this time, it’s still an open question as to whether that amount will be increased to $2,000, but for now Americans know what they’ll be getting (and may have already received).

For many Americans, there is a definite plan for how that money will be spent. And the usual suspects like Walmart (NYSE:WMT) and Amazon (NASDAQ:AMZN) will likely continue to be busy. However, for other Americans, the money they receive will truly be like finding money. Both scenarios present different thoughts for investors.

You may agree with the payments. You may disagree with them. It really doesn’t matter, they’re coming and now as an investor, the question is how can you benefit from the new spending that will undoubtedly occur as a result of Americans receiving this stimulus?

We have some ideas and we’re sharing them with you in this special presentation. It’s comforting to remember that for many people receiving the stimulus checks will help ease the pressure from desperate circumstances.

View the “7 Stocks to Buy As Americans Receive Stimulus Checks”.

Procter & Gamble says its revenue climbed by 8% in fiscal Q2.

Payoneer SPAC Merger? 5 Things to Know About the Payments Play as FTOC Stock Soars on Buzz

Payoneer may be gearing up to go public via a