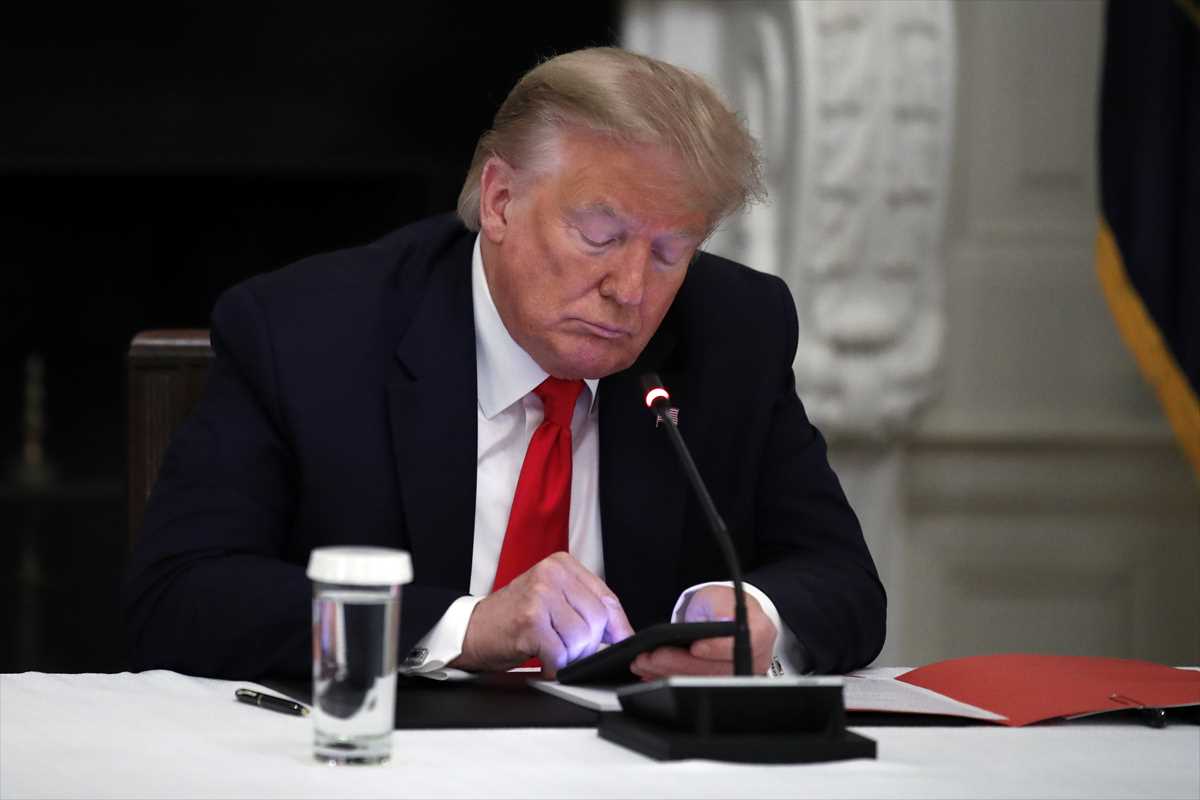 In this Thursday, June 18, 2020 file photo, President Donald Trump looks at his phone during a roundtable with governors on the reopening of America’s small businesses, in the State Dining Room of the White House in Washington. Though stripped of his Twitter account for inciting rebellion, President Donald Trump does have alternative options of much smaller reach. (AP Photo/Alex Brandon, File)

Facebook and Instagram suspended Trump at least until Inauguration Day. Twitch and Snapchat also disabled Trump’s accounts. To top it all off, Twitter ended a nearly 12-year run and shuttered his account, severing an instant line of communication to his 89 million followers.

“Free Speech Is Under Attack! Censorship is happening like NEVER before! Don’t let them silence us. Sign up at http://DONJR.COM to stay connected!” his eldest son, Donald Trump Jr., tweeted Friday.

The short answer is yes.

As the Congressional Research Service has explained in a report for federal lawmakers and their staffs, lawsuits predicated on a website’s decision to remove content largely fail. That’s because the free speech protections set out in the First Amendment generally apply only to when a person is harmed by an action of the government.

Krebs oversaw election cybersecurity efforts at the Department of Homeland Security until Trump fired him when he disputed election fraud claims. Speaking on CBS’s “Face the Nation” Sunday, he explained that companies enforce their own standards and policies for users.

The company said after reviewing Trump’s account in the context of the riot at the Capitol on Wednesday, it was concerned about two tweets he sent Friday that Twitter said could incite violence. They were:

— “The 75,000,000 great American Patriots who voted for me, AMERICA FIRST, and MAKE AMERICA GREAT AGAIN, will have a GIANT VOICE long into the future. They will not be disrespected or treated unfairly in any way, shape or form!!!”

— “To all of those who have asked, I will not be going to the Inauguration on January 20th.”

The first tweet, the company said, was received by some supporters as further confirmation that the Nov. 3 election was not legitimate — but in fact, the notion of widespread voter fraud is a baseless claim. The use of the words “American Patriots” to describe some of his supporters was also interpreted as support for those committing violent acts at the Capitol.

The company said the second tweet could serve as encouragement to those considering violent acts that the inauguration ceremonies on Jan. 20 would be a “safe” target since he would not be attending.

“Our determination is that the two Tweets above are likely to inspire others to replicate the violent acts that took place on January 6, 2021, and that there are multiple indicators that they are being received and understood as encouragement to do so,” Twitter wrote.

Despite their disagreements (real or imagined) on almost everything, Democrats and Republicans alike love infrastructure projects. These are easy wins for Congressional leaders seeking re-election. And they typically spur job creation, which contributes to economic growth.

With that in mind, it’s ironic that, in the last four years, the United States Congress did not pass an infrastructure bill.

Nevertheless, even with (and maybe because of) the gridlock that looks to be in the country’s future, the infrastructure looks to be on the front burner again. The economic recovery is still far from complete. Unfortunately, neither are America’s roads, energy grid, telecommunications systems, and the like. That means that it would seem like a good policy for a Biden administration to look at an infrastructure bill.

Biden will be under pressure to endorse the $1.5 trillion infrastructure package that the Democrat-controlled House of Representatives passed in July. But the package may need to be tweaked a bit since it currently includes climate change initiatives that have kept the bill from advancing through the Senate.

However, it appears that the economy will need some significant juice after whatever this winter brings in terms of the virus. And if calmer heads prevail (we can always hope), there may be a major infrastructure bill to stimulate job creation. And we’ve identified seven stocks that should bear watching if this comes to pass.

View the “7 Infrastructure Stocks That May Help Rebuild America”.

Palladium extended its correction from the recent highs above $2500

© Reuters. Turkish lira banknotes are seen in this illustration