This Monday, Dec. 14, 2020 file photo, shows a vial of the Pfizer-BioNTech vaccine for COVID-19 at Hartford Hospital in Hartford, Conn. New research suggests that Pfizer’s COVID-19 vaccine can protect against a mutation found in two contagious variants of the coronavirus that erupted in Britain and South Africa. Britain races to vaccinate more than 15 million people by mid-February, and in an effort to ensure vaccines get to the right places at the right times, along with the syringes, alcohol swabs and protective equipment needed to administer them, the government has called in the army. (AP Photo/Jessica Hill, File) 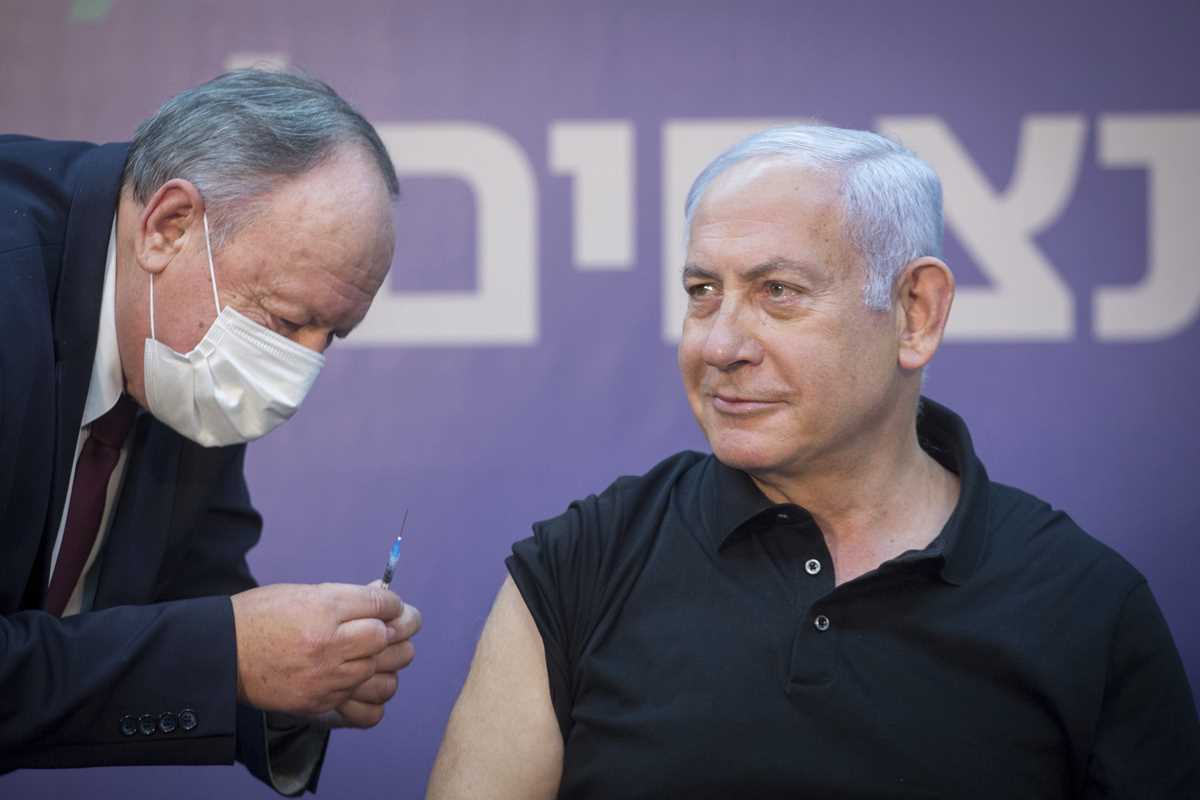 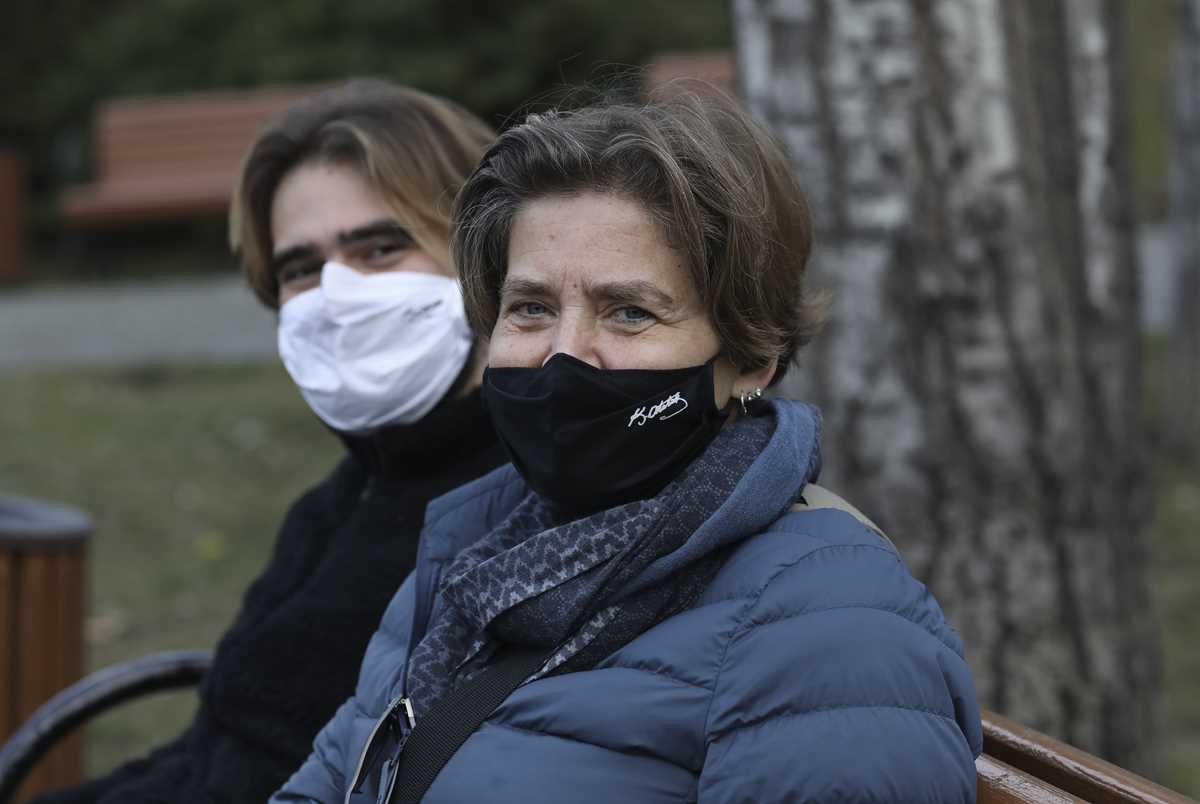 A Turkish mother and her son wearing masks with the signatures of Turkey’s founder Mustafa Kemal Ataturk to help protect against the spread of coronavirus, sit in a deserted public garden during a lockdown, in Ankara, Turkey, Saturday, Jan. 9, 2021. Turkey impose a two-day lockdown on the weekend, in a bid to stem the spread of COVID-19.(AP Photo/Burhan Ozbilici) 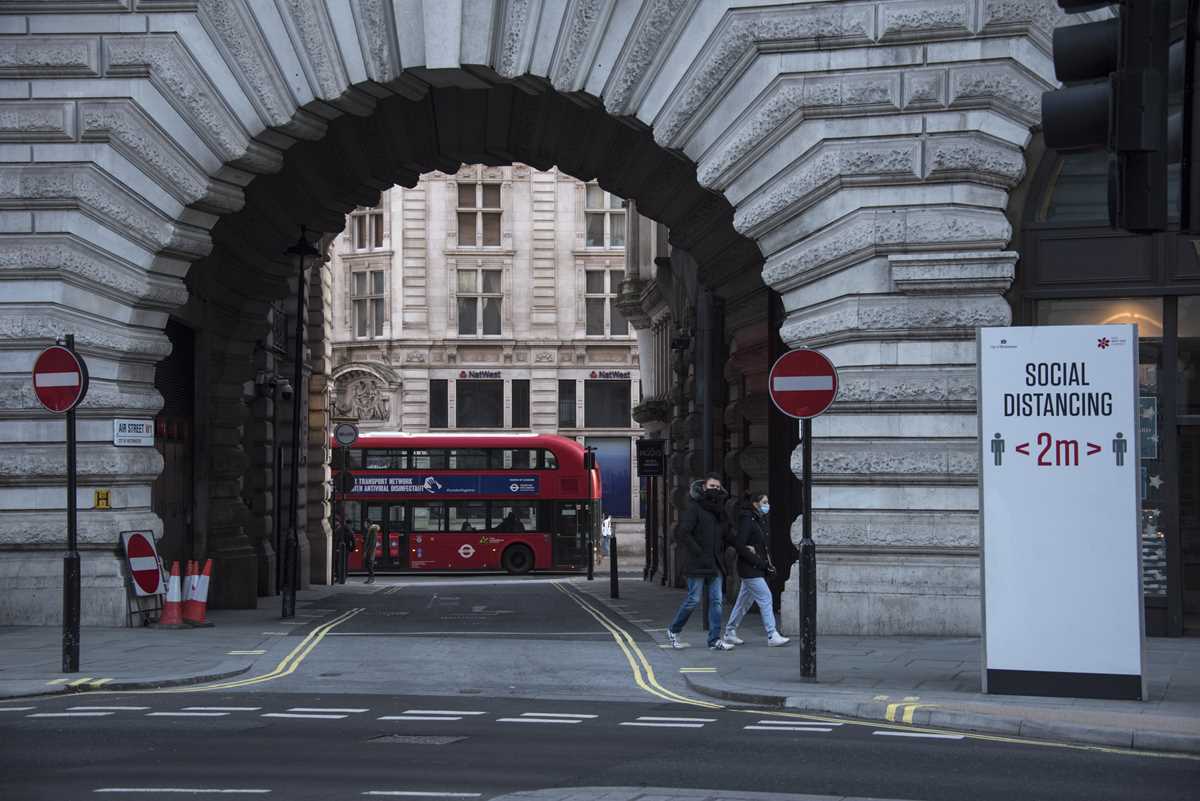 People wear face masks as they walk past a social distancing sign in Regent Street, in London, Saturday, Jan. 9, 2021, during England’s third national lockdown to curb the spread of coronavirus. (AP Photo/Alberto Pezzali) 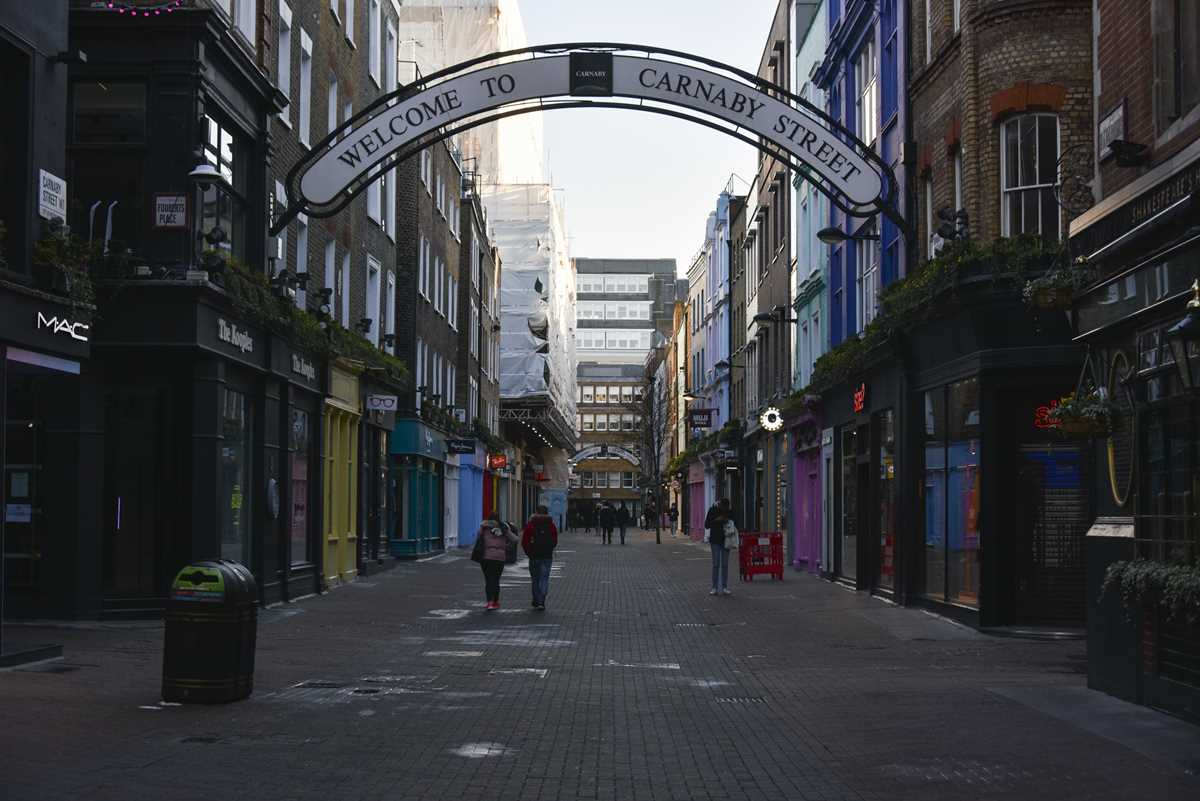 General view of a near empty Carnaby Street, in London, Saturday, Jan. 9, 2021, during England’s third national lockdown to curb the spread of coronavirus. (AP Photo/Alberto Pezzali) 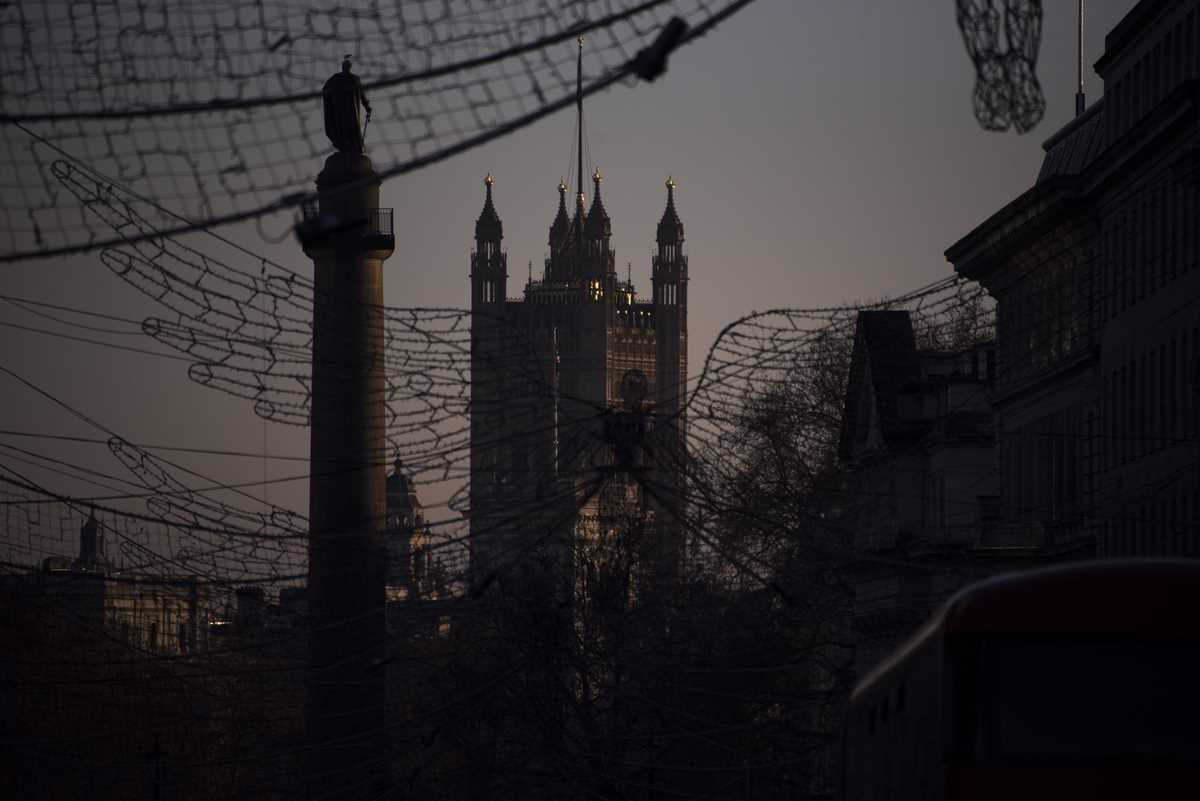 The Victoria Tower is seen behind the Christmas decorations in Regent Street St James’s, in London, Saturday, Jan. 9, 2021, during England’s third national lockdown to curb the spread of coronavirus. (AP Photo/Alberto Pezzali)

LONDON — Thousands of people 80 and older have started receiving invitations to get the coronavirus vaccine in England, officials said Sunday, as Britain ramps up its national vaccination program in a bid to meet its target of inoculating about 15 million people by the middle of February.

More than 600,000 invitations are due to arrive at doorsteps across England this week, asking the elderly to sign up for jabs at new mass vaccination centers near them.

The government has given a first dose of the vaccine to more than 1.2 million people so far.

The seven new large-scale vaccination centers join some 1,000 other sites across the country, including hospitals, general practitioners’ clinics and some drugstores.

Officials are hoping a speedy mass vaccination rollout will help get Britain out of its third national lockdown, which was ordered this month to curb an alarming surge of COVID-19 infections and deaths. Britain has seen 81,000 deaths in the pandemic, according to a tally by Johns Hopkins University.

Germany initially managed to keep death numbers low in comparison to its European neighbors, but since October both new infections and deaths have been creeping up steadily. On Sunday Germany recorded 16,946 new infections.

The country entered a second hard lockdown last month, which was recently extended until the end of January. Schools and most stores are closed, hospitals in the country are on edge and some morgues don’t have enough space to cool the relentless flow of incoming bodies.

German Chancellor Angela Merkel has warned that the coming weeks will be the most difficult in the pandemic. However, the chancellor also said mass vaccinations, which started in late December, will eventually bring relief.

“A few hundred thousand have been vaccinated and it will become more every day. The speed will pick up,” Merkel said in her weekly podcast.

Germany and the European Union have so far approved the vaccines by Pfizer-BioNTech and Moderna. More that 530,000 people, mostly the elderly and medical staff, had been vaccinated by Saturday.

LVIV, Ukraine — A medical college in western Ukraine has been transformed into a temporary hospital as the coronavirus inundates the Eastern European country.

The foyer of the college in the city of Lviv holds 50 beds for COVID-19 patients, and 300 more are placed in lecture halls and auditoriums to accommodate the overflow of people seeking care at a packed emergency hospital nearby.

The head of the hospital’s therapy division, Marta Sayko, said the college space has doubled treatment capacity. She hopes a broad lockdown ordered Friday will reduce the burden on the Ukrainian health care system.

Many medical workers have criticized the government for ordering the lockdown only after the Christmas and New Year’s holidays rather than risk angering the public.

“We saw large-scale New Year’s festivities almost in every city,” Borys Ribun, chief of the regional pathology bureau in Lviv, said. “I think there will be consequences. We shall see them in a week or two.”

BEIJING — More than 360 people have tested positive in a growing coronavirus outbreak south of Beijing in neighboring Hebei province.

China’s National Health Commission reported Sunday that 69 new cases had been confirmed, including 46 in Hebei.

The outbreak has raised particular concern because of Hebei’s proximity to the nation’s capital. Travel between the two has been restricted, with workers from Hebei having to show proof of employment in Beijing to enter.

Hebei has recorded 183 confirmed cases and an additional 181 asymptomatic cases over the last eight days. China does not include those who test positive but do not show symptoms in its official case count.

Almost all of the cases are in Shijuazhuang, the provincial capital, which is 260 kilometers (160 miles) southwest of Beijing. A handful have also been found in Xingtai. Both cities have conducted mass testing of millions of residents, suspended public transportation and restricted residents to their communities or villages for one week.

MEXICO CITY — Mexico has posted another daily record for newly confirmed coronavirus cases, with 16,105 new infections reported Saturday, and a near-record of 1,135 deaths related to COVID-19 in the latest 24-hour period.

The country has now topped 1.5 million total infections and over 133,000 deaths so far in the pandemic. Given Mexico’s extremely low level of testing, official estimates suggest the real death toll is over 180,000.

Health authorities said 6,722 shots of coronavirus vaccine were administered Friday, for a total so far of about 75,000. In Mexico City, the current center of the pandemic in Mexico, 90% percent of hospital beds are full.

MONTREAL — A curfew meant to curb a rising tide of COVID-19 cases took effect across Quebec on Saturday evening.

Premier Francois Legault says the measure is needed to prevent gatherings that have fueled the rampant spread of the virus, The French-speaking Canadian province has a population of more than 8.4 million

The rules will see most residents face police questions or fines of up to $6,000 Canadian (U.S. $4,728) if they’re out between 8 p.m. and 5 a.m. for the next four weeks. There are exceptions for essential workers, people walking dogs, and those who have medical reasons to be out, such as a doctor’s appointment.

They also pushed for more testing, which has lagged in Japan, being expensive and hard to get unless severely ill.

“It’s essential to consider the worst possible scenario, but the response has always been based on an overly optimistic outlook,” Yukio Edano, a former economy minister, said on broadcaster NHK TV.

Opposition lawmakers Toranosuke Katayama and Kazuo Shii also criticized the state of emergency as too limited in scope, area and duration. The declaration, which kicked in Friday, asks restaurants to close at 8 p.m., lasts a month and focuses on the Tokyo area.

Prime Minister Yoshihide Suga defended the focus of the declaration and said the rising curve in the infection’s spread will get flattened in a month.

Deaths related to COVID-19 have totaled about 4,000 nationwide so far. Worries are growing about hospitals getting stretched thin. Tokyo’s cases have surged recently to more than 2,000 a day.

The lieutenant governor learned of the close contact Saturday morning, has since tested negative and is showing no symptoms, officials said. He will continue to be tested and will remained quarantined until midnight on Jan. 12, officials said.

LAS VEGAS — Nevada is reporting one of the state’s highest daily increases in coronavirus deaths since the pandemic began, and its worst week yet.

The state on Saturday reported 2,648 additional known COVID-19 cases and 56 additional deaths. That’s close to the record of 60 deaths reported only on Wednesday. The Las Vegas Review-Journal reported that the state’s one-week total of 299 COVID-19 deaths was the worst yet.

The state Department of Public Health said the number raises the state’s death toll since the start of the pandemic to 29,233.

A surge of cases following Halloween and Thanksgiving produced record hospitalizations in California, and now the most seriously ill of those patients are dying in unprecedented numbers.

Already, many hospitals in Los Angeles and other hard-hit areas are struggling to keep up and warned they may need to ration care as intensive care beds dwindle.

OKLAHOMA CITY — An Oklahoma judge has extended a temporary restraining order allowing bars and restaurants across Oklahoma to stay open past an 11 p.m. curfew issued in November by Gov. Kevin Stitt in an effort to slow the spread of the coronavirus.

District Judge Susan Stallings heard arguments in the case Friday and extended the Dec. 29 order while she considers ruling in the lawsuit by bar owners who argue the governor doesn’t have legal authority to impose the curfew, according to court records.

Attorneys for the governor say state law gives Stitt “broad and flexible authority needed” to combat the spread of the virus.

On Saturday, Oklahoma has the sixth most new cases per capita in the nation with 1,218.16 per 100,000 residents, according to data from Johns Hopkins University. The state health department on Saturday reported 2,738 deaths since the pandemic began.

JERUSALEM — Israeli Prime Minister Benjamin Netanyahu on Saturday received the second dose of the coronavirus vaccine after becoming the first Israeli to be inoculated last month.

Israel is in the midst of a third nationwide lockdown after seeing a surge in cases despite unleashing one of the world’s fastest vaccination campaigns. The country has given the first of two vaccine doses to nearly 20% of its population. Netanyahu said Saturday that it has secured enough vaccines to inoculate the whole adult population by the end of March.

Netanyahu has placed the vaccination drive at the center of his campaign for reelection in March, when Israel will hold its fourth nationwide vote in less than two years. In the meantime, he has called on Israelis to make “one last big effort” to halt transmission by adhering to the tightened restrictions.

Most schools and businesses were closed starting Friday, with people required to remain within 1,000 meters (yards) of home except for essential needs. Public gatherings are heavily restricted and public transportation is limited. The restrictions are to last for at least two weeks.

7 Best Stocks to Own Right Now

Today, we invite you to view our list of the seven best stocks to own for the next thirty days.

Why is it worth looking into these stocks? Some of Wall Street’s most respected and most accurate research analysts have been upgrading these stocks and raising their price targets for these companies.

Analysts have given four-star and five-star ratings from MarketBeat consistently issue accurate price targets, and their buy recommendations often outperform the market by double digits. Buy recommendations from our current top-rated brokerage, National Securities, have gone up by an average of 47.5% in the 12 months after they were issued.

We’ve reviewed every research report published by these top-rated analysts in the last 90 days and have identified seven stocks that these analysts are poised for an immediate breakout.

View the “7 Best Stocks to Own Right Now”.

Palantir’s Got More Potential Contracts Ahead: Phoenix By biedex.markets

GBPJPY Up 9 Pips On Hourly Chart

Novavax, Inc. (NASDAQ: NVAX) is beefing up its executive team