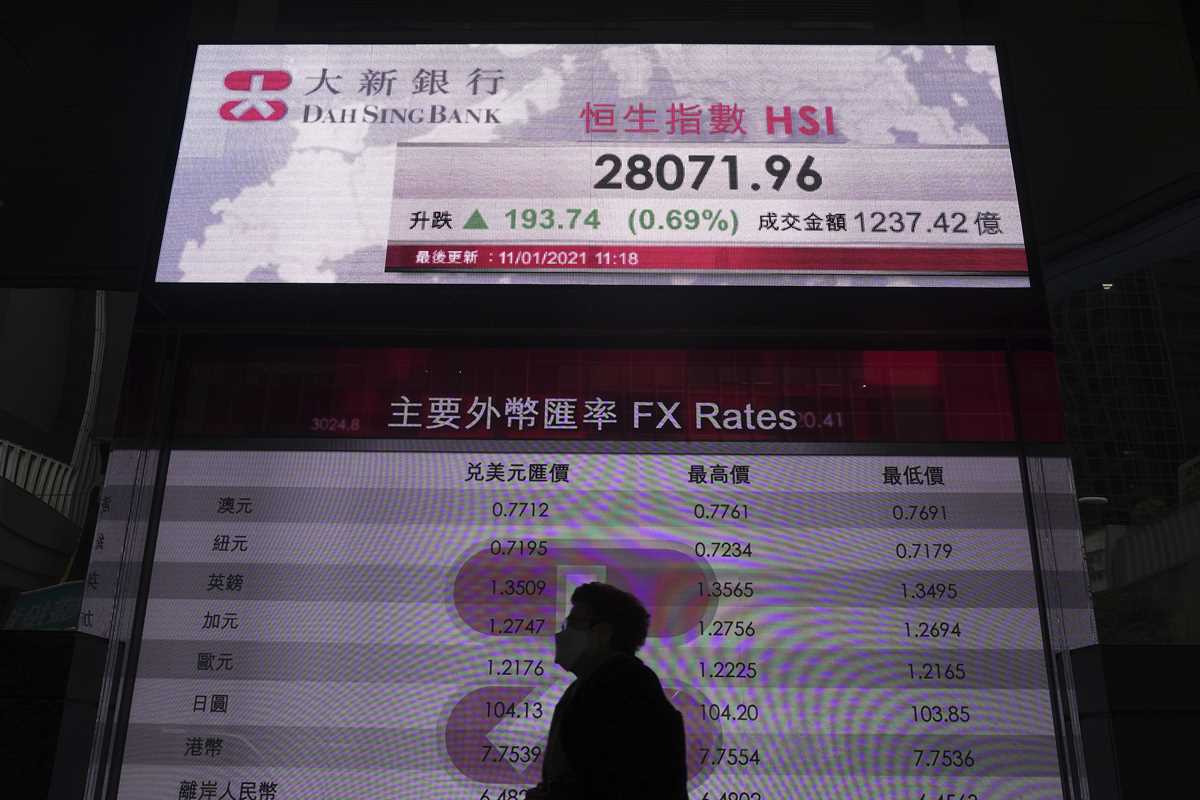 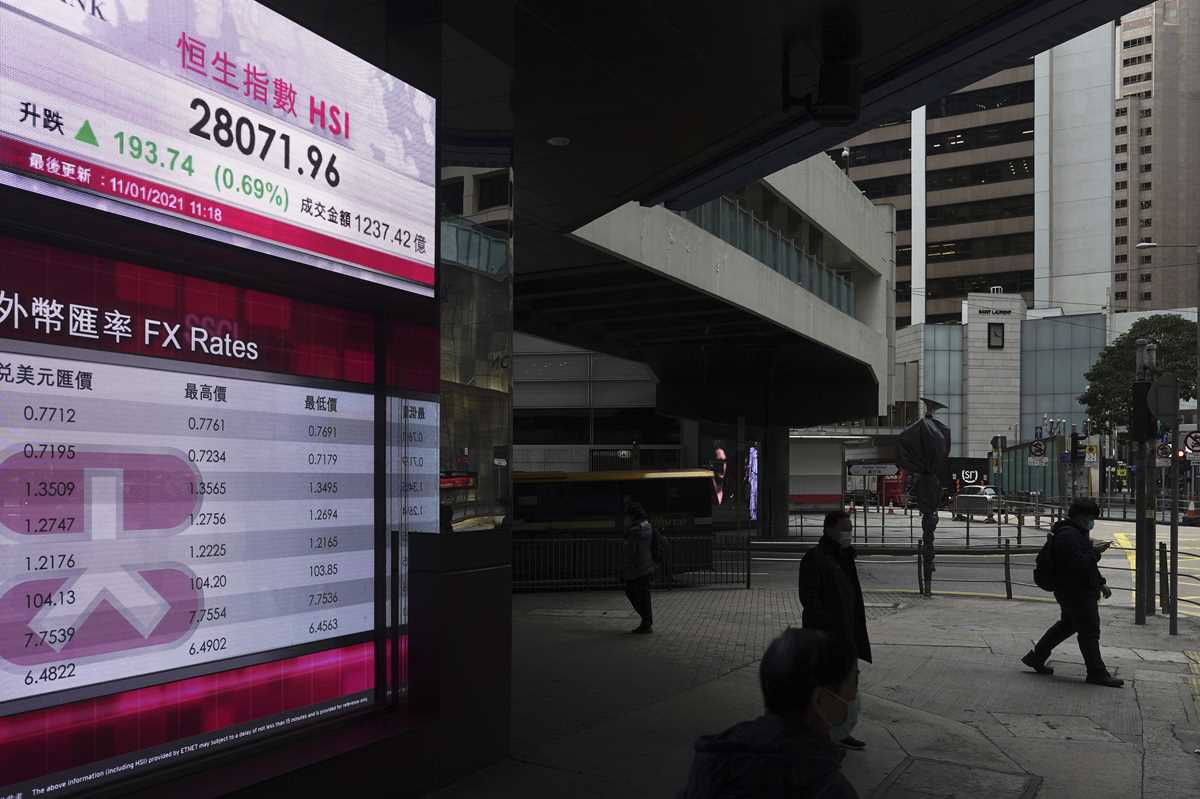 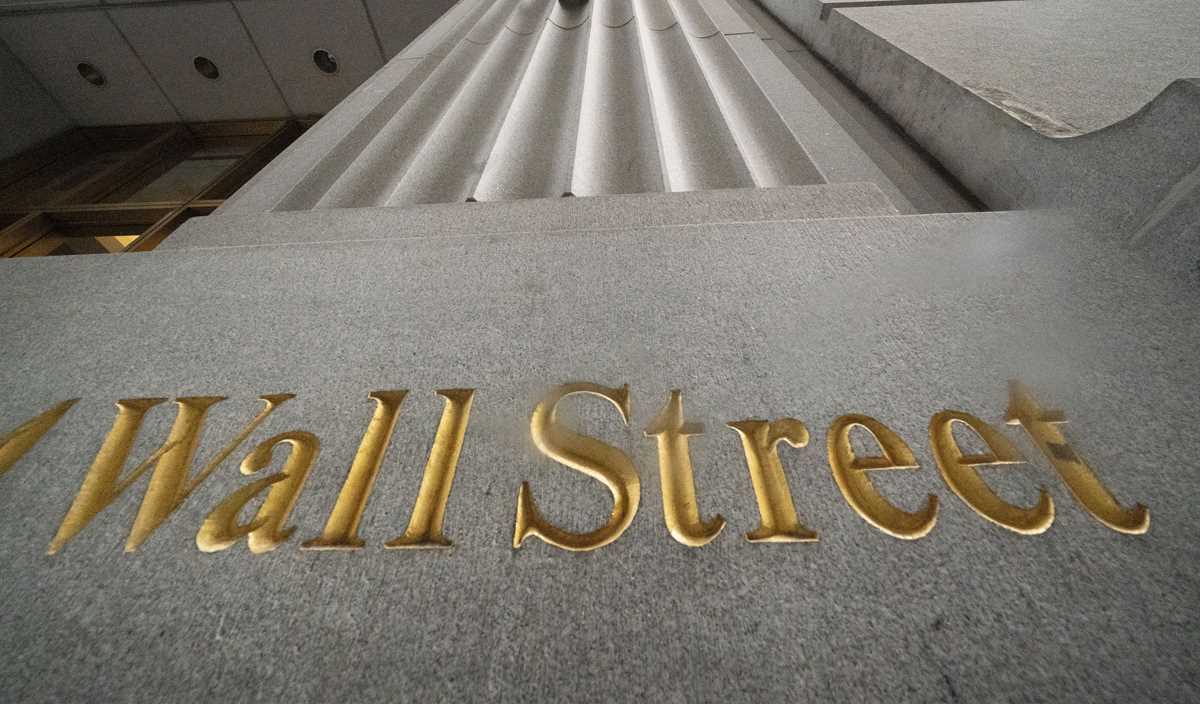 In this Nov. 5, 2020 file photo, a sign for Wall Street is carved in the side of a building. Stocks are slipping Monday, Jan. 11, 2021, as trading cools in markets around the world following their strong record-setting runs. (AP Photo/Mark Lennihan, File)

Stocks closed lower on Wall Street Monday as trading cools in markets around the world following record-setting runs. The S&P 500 fell 0.7%, breaking a four-day winning streak. Analysts said a pullback was no surprise following the big rally recently for everything from stocks to bond yields to commodities amid a wave of optimism. At the same time, the worsening pandemic continues to slam the economy. Treasury yields continued to rise, partly on expectations that the U.S. government is set to borrow a lot more money for stimulus programs. That has investors raising their expectations for economic growth and inflation.

THIS IS A BREAKING NEWS UPDATE. AP’s earlier story follows below.

Stocks are slipping Monday as trading cools on Wall Street and in markets around the world following record-setting runs.

Analysts said a pullback was no surprise following the big rally recently for everything from stocks to bond yields to commodities amid a wave of optimism. With Democrats set to take control of Washington, investors expect Congress to try soon to deliver more stimulus to the economy through larger cash payments for Americans and other programs. That’s building on top of enthusiasm already built about a powerful economic recovery coming later this year as COVID-19 vaccines roll out.

The market managed to essentially shrug off much of last week’s bad news, including the attack on the U.S. Capitol on Wednesday, surging virus cases, and a disappointing employment report, said Julian Emanuel, BTIG chief equity and derivatives strategist. That both speaks to the market’s resiliency and could signal a change in attitudes.

“The fact that the market shrugged all of this news off, it’s ushering in a more speculative stage in the bull market,” he said.

The big rally means stocks and other investments are even more expensive, leaving critics to say they’ve gone too high. One of the main ways professional investors gauge a stock’s value is by measuring its price against how much profit it made in the prior 12 months. Stocks in the S&P 500 are trading at roughly 29 times their earnings. That’s a much more expensive price tag than their average over the last decade of a little below 18, according to FactSet.

“Given where we are in terms of valuation, there’s not going to be tolerance for news that isn’t good,” Emanuel said.

At the same time, the worsening pandemic continues to slam the economy. U.S. employers cut more jobs last month than they added, for example, the first month of job losses since last spring. New, potentially more contagious strains of the coronavirus are helping the pandemic to tighten its grip on the economy around the world.

In the background, political uncertainty also continues to hang over markets. Democrats are pushing for the removal of President Donald Trump, who has less than two weeks left in his term, after his words helped incite a group of loyalists to storm the Capitol last week.

“The equity markets remain forward-looking and focused on what is to come beyond the next 10-15 days,” said Bill Northey, senior investment director at U.S. Bank Wealth Management.

Shares of Twitter slid 6.5% for the largest loss in the S&P 500 after it banned Trump from his account and his 89 million followers. Twitter cited “the risk of further incitement of violence,” but the move has drawn a lot of anger from conservatives who may abandon the service and ask for more regulatory scrutiny of the company. Facebook fell 3.7% after it suspended Trump’s accounts.

Other areas of the market were also losing momentum, but not by as much as social media stocks and Big Tech. Stocks of smaller companies were down, for example, with the Russell 2000 index slipping 0.2%. It remains 5.7% higher for 2021 so far, more than quadruple the gain of the big stocks in the S&P 500. Investors have been rotating out of the winners of the stay-at-home pandemic economy and looking for potential winners of a recovering economy.

One area of the market that continues to climb is in the bond market. Treasury yields have been shooting higher, in part on expectations that the U.S. government is set to borrow a lot more money for stimulus programs. That has investors raising their expectations for economic growth and inflation, and the yield on the 10-year Treasury climbed to 1.13% from 1.09% late Friday. It was at just 0.89% at the end of 2020 after setting a record low during the year.

Higher long-term yields can put pressure on stock prices and make them look even more expensive. That’s because when bonds are paying investors more in interest to own them, they can pull buyers away from stocks. In general, higher interest rates make investors less willing to pay higher prices for stocks relative to their earnings.

Strategists at Morgan Stanley have been saying for months that bond yields may be set for a big rise, and they said in a report on Monday that stocks may have hit their peak for how much investors are willing to pay for each $1 of corporate earnings. That would put more pressure on companies to grow their earnings for their stock prices to rise further or even to hold steady.

Analysts expect strong profit growth to return for companies later this year as the economy recovers. But in upcoming weeks, when CEOs are scheduled to tell shareholders how much profit they made during the last three months of 2020, Wall Street expects to see a sharp drop. Analysts forecast S&P 500 companies to report a decline of nearly 9% in earnings per share from a year earlier, according to FactSet. If they’re right, it would be the third-worst drop since the summer of 2009.

7 Retail Stocks That Defied The Pandemic

When the COVID-19 pandemic struck, there was no reason to think a retailer, any retailer, would be able to come out alive. After all, the economy looked at a month or more of shut-down, and most retailers survive on a thread of profits. Most analysts failed to consider the health of the economy going into the pandemic and what that meant for spending power.

The U.S. economy was on the brink of acceleration way back in February of 2020. It was a different time, employment was at its strongest in decades, and the consumer was flush. Yes, the stimulus checks helped drive the trends I am alluding to, but spending on Stay-at-Home, Home-Improvement, and Outdoor Living began well before those checks were mailed.

We are about to show you a group of stocks that are able to defy the pandemic. Some of them were perfectly positioned for the crisis and surfed it like the wave of profits it was. Some were able to adjust and come back fighting. Others circled the wagons and waited out the storm. In all cases, the businesses are supported by a healthy eCommerce presence and benefit from brand recognition, a combination that has digital sales up triple-digits from 2019. And some of them pay a good dividend too!

View the “7 Retail Stocks That Defied The Pandemic”.

Saudi Arabia stocks lower at close of trade; Tadawul All Share down 0.27% By biedex.markets

Where the Market Goes Next

Top 5 Things to Watch in Markets in the Week Ahead By biedex.markets