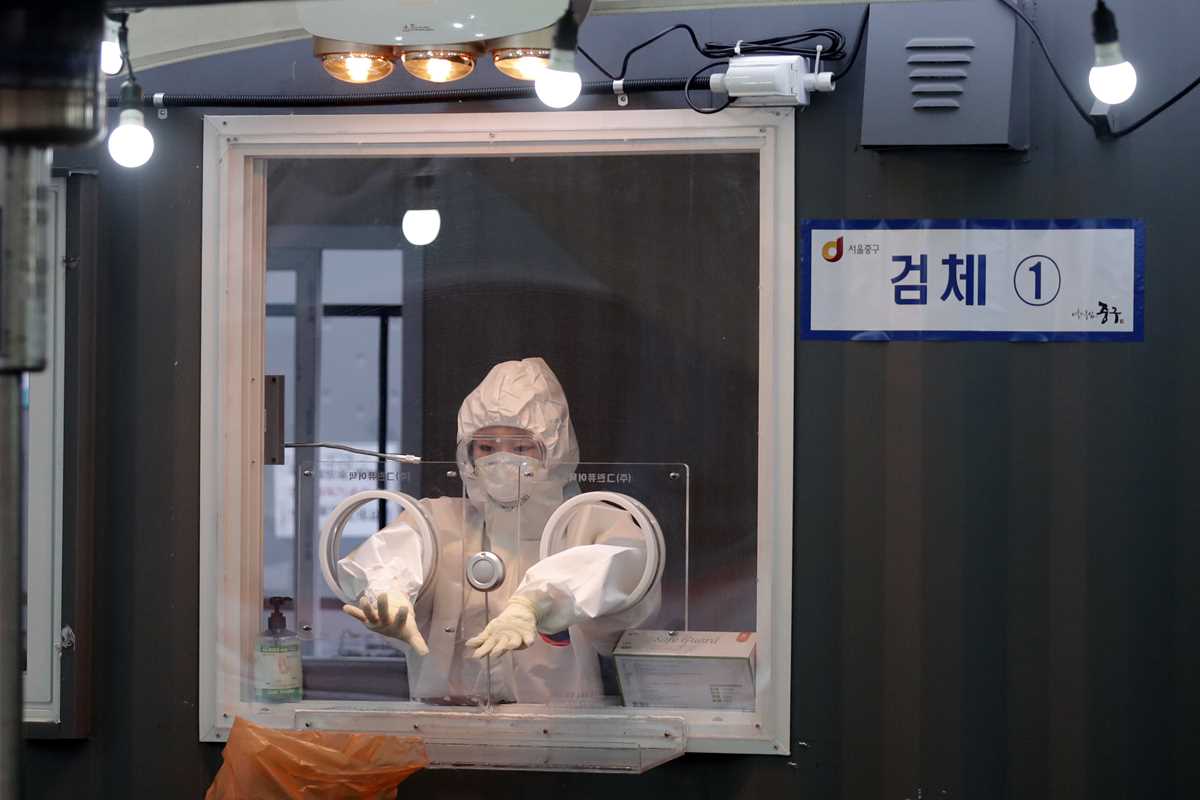 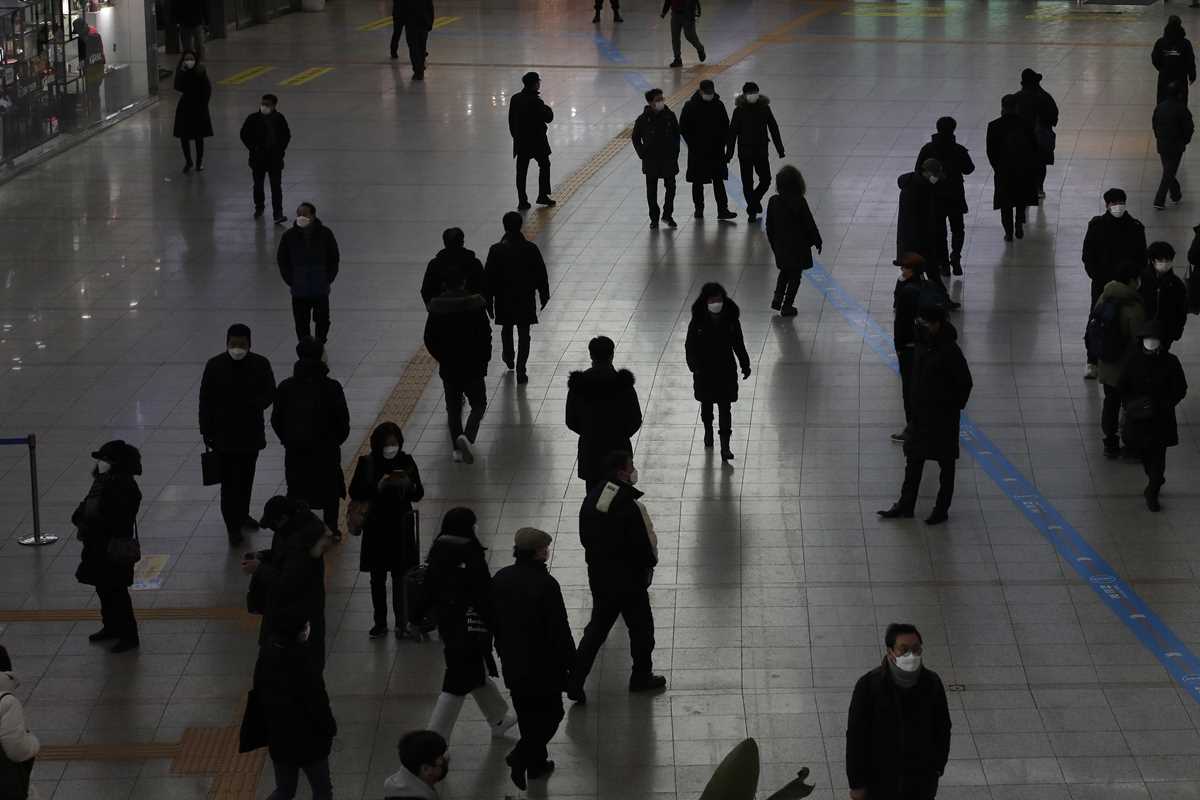 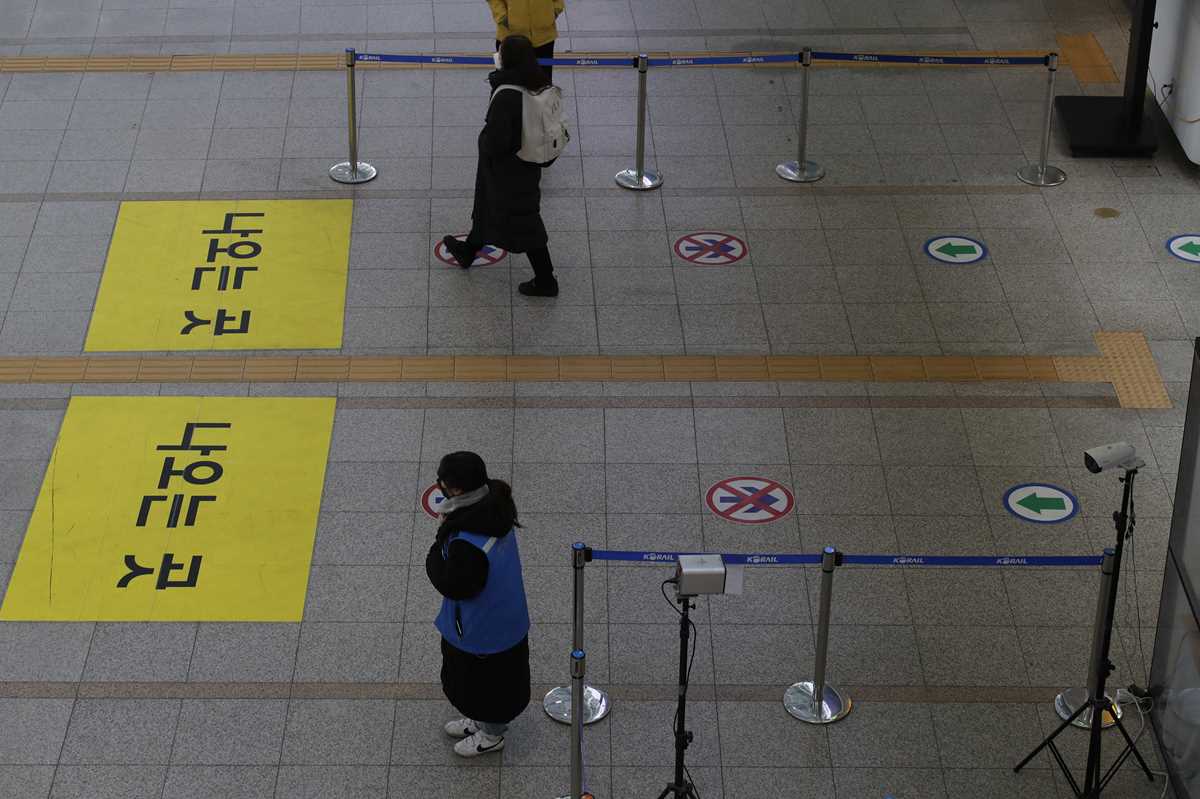 An employee wearing a face mask stands to guide passengers to maintain a one-way walk flow as a precaution against the coronavirus at the Seoul Railway Station in Seoul, South Korea, Monday, Jan. 11, 2021. (AP Photo/Lee Jin-man)

SEOUL, South Korea — South Korea’s president says the country will offer free COVID-19 vaccinations to all its people in phases.

President Moon Jae-in made the comment in his New Year’s address on Monday. The government earlier announced that inoculations will start in February.

South Korean officials have said they’ll have vaccines for 56 million people, an amount seemingly enough for the country’s 52 million people.

Officials say they’ll work out detailed inoculation plans later this month. They say those recommended to get vaccinations first will include medical personnel, elderly people, adults with chronic diseases, police and soldiers.

After surging for weeks, South Korea’s virus caseload has gradually slowed amid tough social distancing rules that include a ban on gatherings of five or more people. Earlier Monday, South Korea reported 451 new virus cases, the first time its daily tally has fallen below 500 in 41 days. The country’s total stands at 69,114, including 1,140 deaths.

Moon said that “the end of the dark tunnel is finally coming into sight.” He said the government will make its best effort to further curb the ongoing outbreak.

— President-elect Joe Biden faces challenge in guiding America past the Trump era, but success on virus, economy may help

— India took a regulatory shortcut for a homegrown vaccine, though there’s scant evidence of its effectiveness

PARIS — Authorities in northern France launched a weeklong mass testing program on Monday to assess the rate of coronavirus infections and the spread of a more contagious variant that first appeared in southern England in November.

In the city of Roubaix, health officials said they hope to test 10% of the population by Saturday. That represents 10,000 people.

Sequencing will be carried out on the positive samples to detect whether the variant is present.

France has been criticized for its slow vaccination program, having vaccinated only a fraction of some of its neighbors.

As of Friday, only 80,000 French citizens had been vaccinated against the coronavirus. Neighboring Germany has conducted hundreds of thousands of inoculations.

The move is seen as an attempt to return to normalcy from the months of lockdowns imposed to contain the coronavirus.

But the government decided not to reopen schools in the capital Colombo and its suburbs as the majority of recent COVID-19 cases are reported from those areas.

Sri Lanka closed schools in October when two COVID-19 clusters emerged, one centered on a garment factory and the other on the fish market. Some reopened in November but closed again for holidays in December.

The confirmed cases from the two clusters have grown to 44,596 on Monday, accounting for most of the 48,000 cases reported in the country since the pandemic began.

The outbreak focused on the Hebei cities of Shijiazhuang and Xingtai is one of China’s most serious in recent months and comes amid measures to curb the further spread during next month’s Lunar New Year holiday. Authorities have called on citizens not to travel, ordered schools closed a week early and conducted testing on a massive scale.

The Hebei outbreak has raised concern because of its proximity to the nation’s capital. Parts of the province are under lockdown and interprovincial travel has been largely cut off, with those entering Beijing to work having to show proof of employment and a clean bill of health.

TOKYO — The Japanese Health Ministry has found a coronavirus variant in people arriving from Brazil that’s different from the ones in Britain and South Africa.

The variant was found in four people tested at the airport, the ministry said Sunday. Japan was working with other nations, the World Health Organization and other medical experts to analyze the variant.

The previously identified variants from Britain and South Africa are more contagious, but the behavior of this variant and the illness it causes are not yet known.

The Tokyo area has been under a state of emergency since Friday to try to stop the spread of the virus. Japan has had about 4,000 deaths related to COVID-19 so far, and more than 280,000 confirmed cases.

The number of infections worldwide has doubled in just 10 weeks, according to a tally by John Hopkins University on Sunday. COVID-19 infections had hit 45 million as recently as late October.

As of early Monday, John Hopkins counted 90,260,464 infections confirmed by government and other entities tracking cases.

NASHVILLE, Tenn — U.S. Rep. Chuck Fleischmann of Tennessee said Sunday he has tested positive for the coronavirus after coming into contact with another member of Congress with whom he shares a residence in Washington.

Fleischmann said in a statement on Twitter that he has been in quarantine since Wednesday night, when he learned the other individual had tested positive.

Fleischmann said he is “feeling okay” and is consulting with the Capitol’s attending physician.

In November, the Republican won his sixth term in the U.S. House from the 3rd Congressional District in southeastern Tennessee.

MEXICO CITY — The spokesman for Mexican President Andrés Manuel López Obrador said Sunday he has tested positive for coronavirus, but there was no word on whether the president had been tested.

Spokesman Jesús Ramírez Cuevas wrote on his Twitter account: “I am in good health and I will be working from home.”

Ramírez Cuevas is close to López Obrador, often handing him documents or going on trips with the president.

López Obrador is 67 and has high blood pressure, but almost never wears a mask.

On Sunday, López Obrador toured the Pacific coast seaport of Manzanillo and gave a speech, as usual without a mask on.

JOHANNESBURG — Africa passed the milestone of 3 million confirmed cases COVID-19 Sunday, including more than 72,000 deaths, according to the Africa Centers for Disease Control and Prevention.

South Africa accounts for more than 30% of the continent’s total with more than 1.2 million reported cases, including 32,824 deaths. The high proportion of cases in South Africa could be because the country carries out more tests than many other African countries.

South Africa is battling a resurgence of the disease, driven by a variant of the virus that is more contagious and spreading quickly. Many hospitals are reaching capacity, yet the numbers of those infected are expected to continue rising, according to health experts.

South African President Cyril Ramaphosa will meet with his Cabinet this week to consider if further restrictions should be taken.

7 Retail Stocks That Defied The Pandemic

When the COVID-19 pandemic struck, there was no reason to think a retailer, any retailer, would be able to come out alive. After all, the economy looked at a month or more of shut-down, and most retailers survive on a thread of profits. Most analysts failed to consider the health of the economy going into the pandemic and what that meant for spending power.

The U.S. economy was on the brink of acceleration way back in February of 2020. It was a different time, employment was at its strongest in decades, and the consumer was flush. Yes, the stimulus checks helped drive the trends I am alluding to, but spending on Stay-at-Home, Home-Improvement, and Outdoor Living began well before those checks were mailed.

We are about to show you a group of stocks that are able to defy the pandemic. Some of them were perfectly positioned for the crisis and surfed it like the wave of profits it was. Some were able to adjust and come back fighting. Others circled the wagons and waited out the storm. In all cases, the businesses are supported by a healthy eCommerce presence and benefit from brand recognition, a combination that has digital sales up triple-digits from 2019. And some of them pay a good dividend too!

View the “7 Retail Stocks That Defied The Pandemic”.

The Latest: Spain military commander out for jumping line

Bitcoin Outlook: My Mantra for 2021 Can Make You Money

I have a new mantra for 2021: Source: Shutterstock Buy

Cosmos (ATOM) price has rallied over 7% today to recover