It’s a bit like “a tale of two markets.”

On one hand, this is the most expensive stock market ever (by some metrics).

We’re priced for perfection during a time in which the world is anything but perfect.

Increasingly-euphoric investors have been looking ahead to the great reopening of the economy later this year. Expectations are for a supersonic boom of consumer spending that will electrify the economy, and keep the stock-market melt-up going.

But what if something derails this plan?

Say, a new, even deadlier strain of the virus that delays the reopening? Unexpected economic numbers that reveal far worse damage than we expected? A new social or political crisis that further destabilizes our nation?

Some of the smartest investors of all time are worried. They believe we’re rapidly approaching a reckoning in the stock market when expectations will finally fail to live up to reality. They envision a bubble-burst that will inflict extraordinary pain on the average investor who doesn’t see it coming.

Yet, in the meantime, fast profits have been luring more and more investors into the market, and no one wants to leave the party early. This leaves investors feeling like they are walking a knife’s edge.

Some equally-smart investors believe we’ve just begun what will be the greatest decade for investors … ever.

The danger presented by today’s nosebleed valuations is nothing compared to the greater danger of being scared out of a market that history will reveal as one of the most explosive wealth-building periods of all time.

As cutting-edge technological innovations transform our world this decade, it will unleash trillions of dollars of economic activity and investment riches. Even if we are in store for a 30%, 40%, or 50% decline in the market in the months to come, it will appear as little more than a divot when we look back at this decade’s growth curve.

Today, let’s look closer at each argument. Understanding the rationale behind each position will help you create an action plan that suites your specific financial situation.

We’ll then wrap up by suggesting a way you can have your cake and eat it too — remaining in the market, yet doing so in a way that enables you to sleep well at night.

***A dire warning from a legendary investor

Jeremy Grantham is the co-founder and former Chief Investment Strategist at GMO. He’s a very bright investor who predicted the 2000 and 2008 downturns. So, it’s worth paying attention when he’s turning bearish.

That’s where we find Grantham today. Actually, super-bearish might be more appropriate.

… this bubble will burst in due time, no matter how hard the Fed tries to support it, with consequent damaging effects on the economy and on portfolios.

Make no mistake — for the majority of investors today, this could very well be the most important event of your investing lives …

You can’t have your cake and eat it. You can enjoy it now, or you can enjoy it steadily in the distant future, but not both — and the price we pay for having this market go higher and higher is a lower 10-year return from the peak.

On this note, I’d remind readers that the S&P 500 is currently trading at a price-to-earnings ratio that’s only been higher twice since 1870 — the Dot Com crash and the Global Financial Crisis.

… it is highly probable that we are in a major bubble event in the U.S. market, of the type we typically have every several decades and last had in the late 1990s. It will very probably end badly, although nothing is certain.

He also references the “Buffett indicator,” which is total stock market capitalization to GDP. It has now broken through its all-time-high 2000 record.

There’s also the slew of recent IPOs, a record-setting number of microcap stocks tripling in the past year, and spectacularly expensive bond prices by historical comparison.

We’ll wrap up Grantham’s position with this last quote:

… my confidence as a market historian increases that this is indeed the late stage of a bubble. A bubble that is beginning to look like a real humdinger.

It’s hard to argue against the inflated metrics Grantham references. So, what’s the bullish case?

It’s hard to argue against the inflated metrics Grantham references. So, what’s the bullish case?

Matt McCall is the editor of Investment Opportunities, in which he tracks the major trends that are reshaping our world — and creating massive investment opportunities in the process.

This isn’t to say Matt believes we’re in for a smooth 2021. He’s gone on record as calling for two corrections of at least 10% this year.

However, when looking at the “Roaring 2020s,” as he calls them, Matt believes we’re standing at the cusp of a decade of extraordinary wealth creation.

From his just-published January issue of Investment Opportunities:

I expect this to be the best decade in history because the convergence of multiple transformative, disruptive, and life-changing technologies will create trillions of dollars in wealth for the average investor.

The headlines are just the surface.

Underneath the surface are those unstoppable, transformative trends changing our world and our fortunes. They are the Roaring 2020s. Regardless of politics or pandemics, no person or government can slow the freight train of technological innovation …

… think about the rest of this decade. Semiconductors (again) and artificial intelligence will turn our cars into massive computers on wheels. Making calls will occur without grabbing a phone or touching a screen. You will even be able to see the person in your contact lenses, and you’ll be connected in the blink of an eye thanks to 5G.

Heck … and you heard it here first … you will even be able to hail a flying taxi by the end of the decade.

Matt goes on to point toward revolutionary breakthroughs in genomics that gave us a COVID-19 vaccine in record-breaking time (ushering in a golden age for biotech breakthroughs).

He highlights 5G and how it will be up to 100 times faster than 4G, enabling brand new, cutting-edge innovations.

There are also electric vehicles, set to increase by 20X this decade … the explosion of solar energy with production costs reaching lows literally decades before once thought possible … and next-gen blockchain advancements.

Just as it was hard to argue Grantham’s points on valuation, it’s hard to argue with Matt about the trillions of economic wealth that will come from these technological advancements.

***So, how’s an investor to balance these different perspectives?

First, no one has a crystal ball. But more likely than not, they’re both right.

Fortunately, this doesn’t create the inconsistency it might appear to at first glance.

Given valuations, the broad market could indeed collapse and suffer some years of lost returns. Yet, simultaneously, certain elite stocks, riding the trends Matt referenced, could soar multiples higher.

That’s because as we’ve noted many times in the Digest, it’s not so much a “stock market” as it is a “market of stocks.”

In other words, resist the temptation to think that stocks rise and fall in unison as some broad monolith … with the fear that if “the market” drops, so too will your portfolio.

Instead, focus on the specific strengths and outlooks of your own stocks. That’s far more important than what’s happening in the broad market, and even the valuation of the broad market.

It was the U.S. “lost decade,” (plus two years) as some have called it.

But what did Apple’s stock return over the same period? 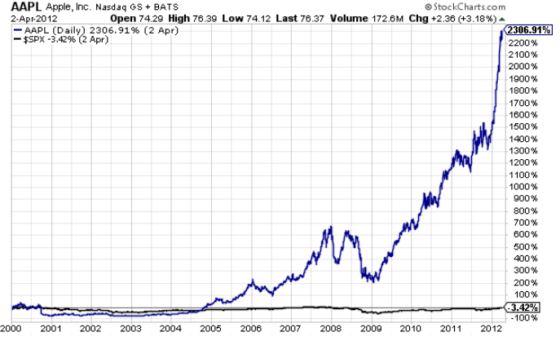 But don’t kid yourself — Apple suffered greatly in the Dot Com bust itself. 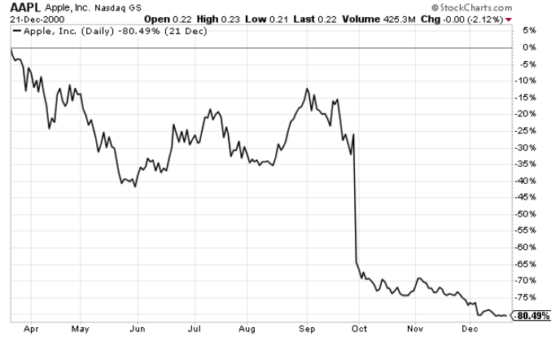 So, did the “lost decade” of the 2000s destroy the wealth of an Apple investor?

Again, it’s your specific stocks, not “the market,” that matters.

Of course, this isn’t a license to stick your head in the sand and assume it will all be okay.

Though Apple roared back, many stocks didn’t.

Look at Cisco, one of the Dot Com era’s high-flyers, and arguably a great company today.

If you’d bought Cisco near its peak in early 2000 and held, you’d still be sitting on a loss today, 21 years later.

Meanwhile, the S&P has basically doubled since 2000 — despite two horrendous crashes. 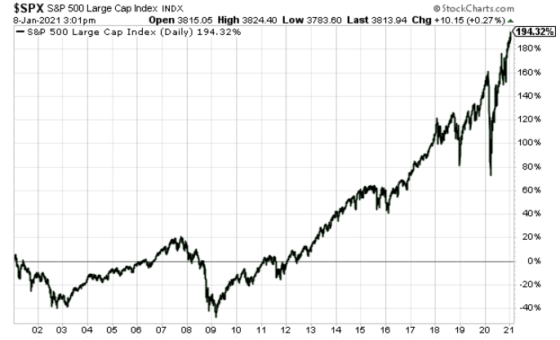 But this underscores our point again, just in reverse — “the market” and “your stocks” are not the same thing (whether for good or bad).

Too many investors tend to think about the markets in binary terms — you’re either fully invested or you’re out. So, as we stand today, you have to decide …

Side with Grantham? Or side with Matt?

But is such a position of extremes logical?

What if you were told you had to choose between showering in either scalding water or ice-cold water … even though the shower was perfectly capable of providing medium-warm water?

If you’re bullish like Matt, but valuations have you nervous like Grantham, why not simply lower your position size in light of your specific financial situation?

If the market pulls back, great — you’ll have a chunk of cash unaffected by a pullback.

On the other hand, if stocks continue grinding higher without a meaningful correction, your wealth is climbing alongside them.

This is a great way to avoid regret — whether it’s the regret of investing … or not investing.

Another solution — simply use the age-old tool of “stop-losses” which should reflect your specific financial situation. You simply figure out ahead of time at what point you’ll say “I’ve reached my ‘sell’ point. I’m out because it’s important to protect my remaining gains/capital.” And then if your stock falls to that level, you simply show discipline and sell.

But until then, you let a surging market make you wealth — no matter how rich its valuation might be.

As we wrap up, yes, we might be in for a real “humdinger.” But equally yes, we’ve just begun a decade of extraordinary wealth creation. With forethought, planning, and discipline, you can balance these two dynamics.

Have a good evening,

No end in sight for the Australian dollar bull run

Is American Airlines a buy or sell in January?

Gnosis Safe announced that it holds 2.5% of ETH’s total supply