Selena Gomez attends the 2019 ACLU SoCal’s Annual Bill of Rights Dinner in Beverly Hills, Calif. on Nov. 17, 2019. After an angry mob of President Donald Trump supporters took control of the U.S. Capitol in a violent insurrection, Gomez laid much of the blame at the feet of Big Tech. It’s the latest effort by the 28-year-old actress-singer to draw attention to the danger of internet companies critics say have profited from misinformation and hate on their platforms. (Photo by Richard Shotwell/Invision/AP, File) 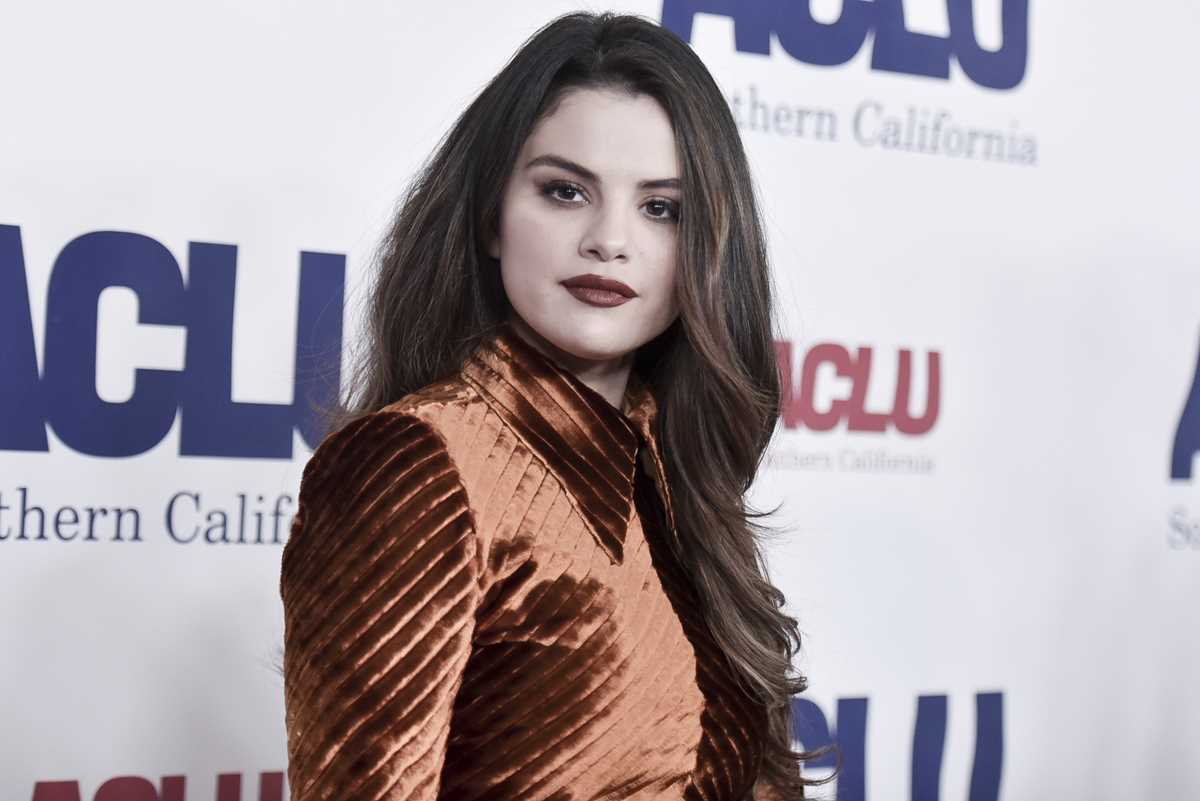 This combination of photos shows from left, Twitter CEO Jack Dorsey, Google CEO Sundar Pichai, and Facebook CEO Mark Zuckerberg. After an angry mob of President Donald Trump supporters took control of the U.S. Capitol in a violent insurrection, Selena Gomez laid much of the blame at the feet of Big Tech. It’s the latest effort by the 28-year-old actress-singer to draw attention to the danger of internet companies critics say have profited from misinformation and hate on their platforms.(AP Photo/Jose Luis Magana, LM Otero, Jens Meyer)

LOS ANGELES (AP) — Hours after an angry mob of Trump supporters took control of the U.S. Capitol in a violent insurrection, Selena Gomez laid much of the blame at the feet of Big Tech.

“Today is the result of allowing people with hate in their hearts to use platforms that should be used to bring people together and allow people to build community,” tweeted the singer/actor. “Facebook, Instagram, Twitter, Google, Mark Zuckerberg, Sheryl Sandberg, Jack Dorsey, Sundar Pichai, Susan Wojcicki — you have all failed the American people today, and I hope you’re going to fix things moving forward.”

It’s just the latest effort by the 28-year-old Gomez to draw attention to the danger of internet companies critics say have profited from misinformation and hate on their platforms. Gomez has been calling out Big Tech for months — publicly on the very platforms she’s fighting and privately in conversations with Silicon Valley’s big hitters.

In an exclusive interview with The Associated Press, Gomez said she’s frustrated by what she views as the companies’ lackluster response and that they have to “stop doing the bare minimum.”

“It isn’t about me versus you, one political party versus another. This is about truth versus lies and Facebook, Instagram and big tech companies have to stop allowing lies to just flow and pretend to be the truth,” Gomez said in a phone interview from New York. “Facebook continues to allow dangerous lies about vaccines and COVID and the U.S. election, and neo-Nazi groups are selling racist products via Instagram.

“Enough is enough,” she said.

Gomez is among a growing number of celebrities using their platforms to call out social media, including Sacha Baron Cohen, Leonardo DiCaprio, Jennifer Lawrence, Kerry Washington, and Kim Kardashian West.

Gomez became passionate about the issue in 2017 when a 12-year-old commented on one of her Instagram posts: “Go kill yourself.”

“That was my tipping point,” she said. “I couldn’t handle what I was seeing.”

Social media experts have argued that companies like Facebook and Twitter played a direct role in the Capitol insurrection both by allowing plans for the uprising to be made on their platforms and through algorithms that allow dangerous conspiracy theories to take flight. That’s even though executives, such as Facebook’s Sandberg, have insisted that planning for the riots largely took place on other, smaller platforms.

“The operational planning was happening in spaces that Selena, for example, was identifying to Sheryl Sandberg in advance saying, ‘You know, we need to do something about white supremacist extremism online and their ability to just form a group on Facebook and happily talk away to each other, plan what they’re going to do next,’” said Imran Ahmed, CEO of the Center for Countering Digital Hate, which has helped educate Gomez about online misinformation.

In emails shared exclusively with the AP, Gomez told Sandberg in September that “a search for a militia group ‘Three Percenters’ results in dozens of pages, groups and videos focused on people hoping and preparing for civil war, and there are dozens of groups titled ‘white lives matter’ that are full of hate and lies that might lead to people being hurt or, even worse, killed.”

That’s even though Facebook banned U.S.-based militia groups from its service in August.

In the same email, Gomez also points to several ads with lies about election fraud being allowed to remain on Facebook and Instagram and questions why that was being allowed.

“I can’t believe you can’t check ads before you take money, and if you can’t you shouldn’t be profiting from it,” she wrote. “You’re not just doing nothing. You’re cashing in from evil.”

In an email response to Gomez, Sandberg defends Facebook’s efforts to remove harmful content, saying the platform has removed millions of posts for hate speech, and bans ads that are divisive, inflammatory, or discourage people from voting. She didn’t directly address the advertising examples Gomez pointed to.

“It’s beating around the bush and saying what people want to hear,” Gomez said about her interactions with Sandberg and Google, among others. “I think at this point we’ve all learned that words don’t match up unless the action is going to happen.”

Following the violence at the U.S. Capitol, tech companies made some of their biggest changes to date.

Facebook, Instagram, Twitter and other platforms banned President Donald Trump, drawing criticism from some including the American Civil Liberties Union that it was censorship, and praise from others who say the president abused his platform by encouraging violence.

In a thread defending Twitter’s Trump ban, CEO Jack Dorsey said “offline harm as a result of online speech is demonstrably real, and what drives our policy and enforcement above all.”

In addition to banning Trump, Facebook has been removing video and photos from Capitol rioters. The company also added text on posts questioning the election, confirming that Joe Biden has been lawfully elected, and saying it was taking enforcement action against militarized social movements like QAnon.

While the changes are positive, they’re “just a drop in the bucket,” said Jeff Orlowski, director of Netflix’s “The Social Dilemma,” a popular 2020 film that showed how Silicon Valley’s pursuit of profit could pose an existential threat to U.S. democracy.

Voices like Gomez’s can be a huge help to get the message across, considering her hundreds of millions of followers, Orlowski said.

Orlowski and Ahmed both said they’re looking to Biden’s administration for reforms, including a measure that would hold social media companies accountable for the posts they allow, an effort that has gained momentum and drawn bipartisan support.

Meanwhile, Gomez vows to keep fighting as long as she has a pedestal.

“While I have this, I’m going to do good things with it,” she said. “I think that’s my purpose.”

After a year like 2020, many Americans figure that just getting to 2021 was enough. But for many people, the start of a new year still means making resolutions. And while many Americans are still waking up to Groundhog’s Day, there is hope that things will look dramatically different in September than they do right now.

Some of the most popular resolutions include losing weight, exercising more, or taking steps to get our life and/or business more organized. And many pure-play companies lean into these trends and are doing well.

As an alternative to this, you can also invest in companies that are not pure plays but can still benefit from consumers looking to start fresh. Owning these stocks helps you manage your risk. If the trend holds, you can ride the wave. On the other hand, if the wave turns into a ripple, the stocks have other catalysts to get them through.

In this special presentation, we’ll take a look at both of these categories. We’ve got several pure-play companies that let investors buy stocks in companies benefiting from these trends. We’ll also give you a few stocks that fall in the latter category.

These are stocks that you might buy at any time and for many reasons. However, they present excellent buys as the new year begins.

View the “7 Stocks to Support Your New Year’s Resolutions”.

What Did the Stock Market Do Today? 3 Big Stories to Catch Up On.

how Indian farmers galvanised a protest movement Reuters via biedex.markets

© Reuters. Farmers and agricultural workers attend a rally against

Water near Arizona Air Force base is tainted in latest case