Carlos Mandez waits in line to fill his propane tanks Wednesday, Feb. 17, 2021, in Houston. Customers had to wait over an hour in the freezing rain to fill their tanks. Millions in Texas still had no power after a historic snowfall and single-digit temperatures created a surge of demand for electricity to warm up homes unaccustomed to such extreme lows, buckling the state’s power grid and causing widespread blackouts. (AP Photo/David J. Phillip) 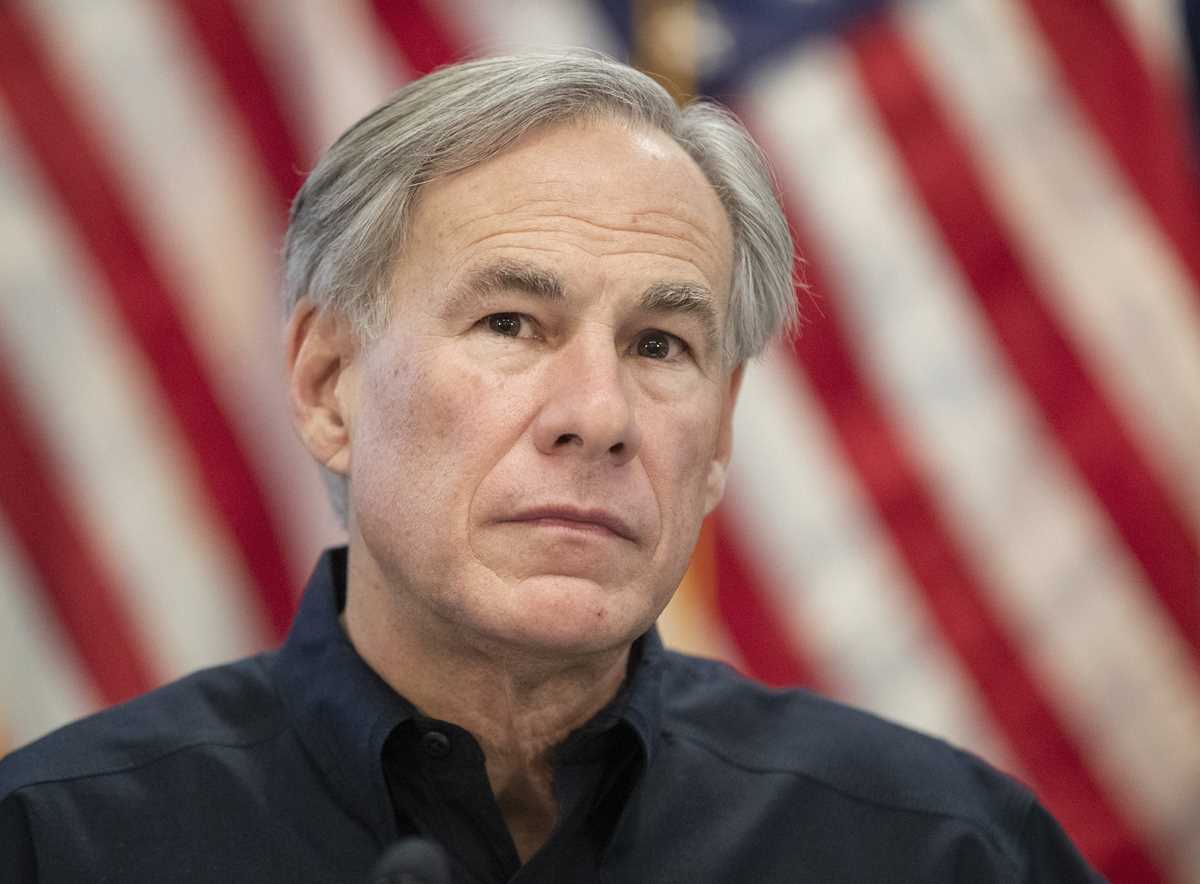 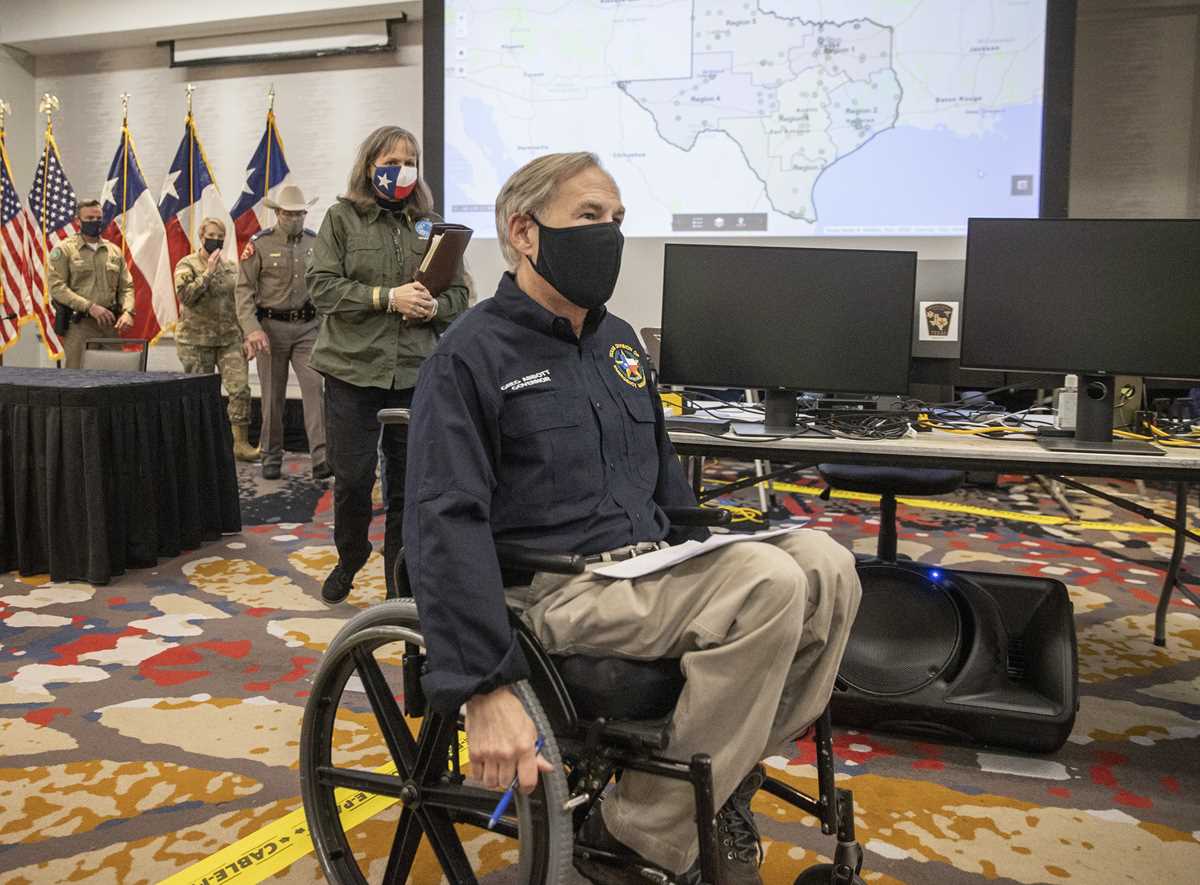 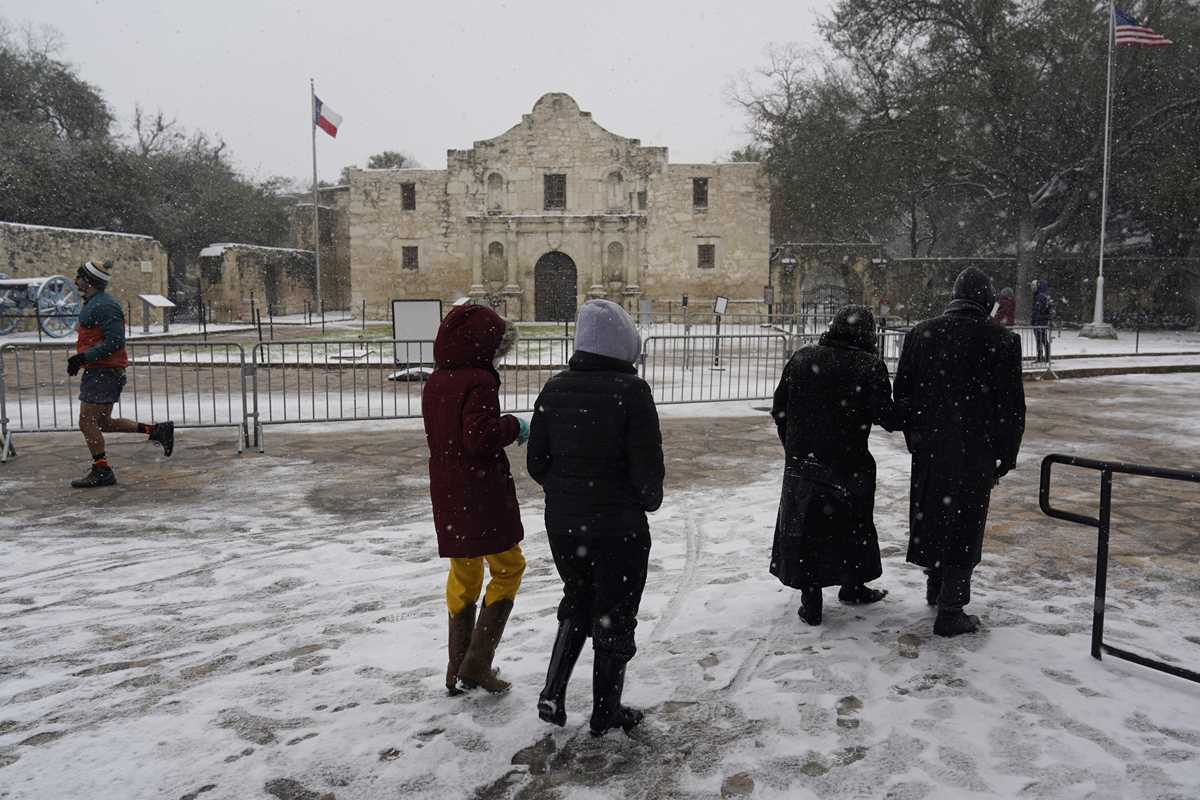 People walk through the snow as they pass the Alamo, Thursday, Feb. 18, 2021, in San Antonio. Snow, ice and sub-freezing weather continue to wreak havoc on the state’s power grid and utilities. (AP Photo/Eric Gay) 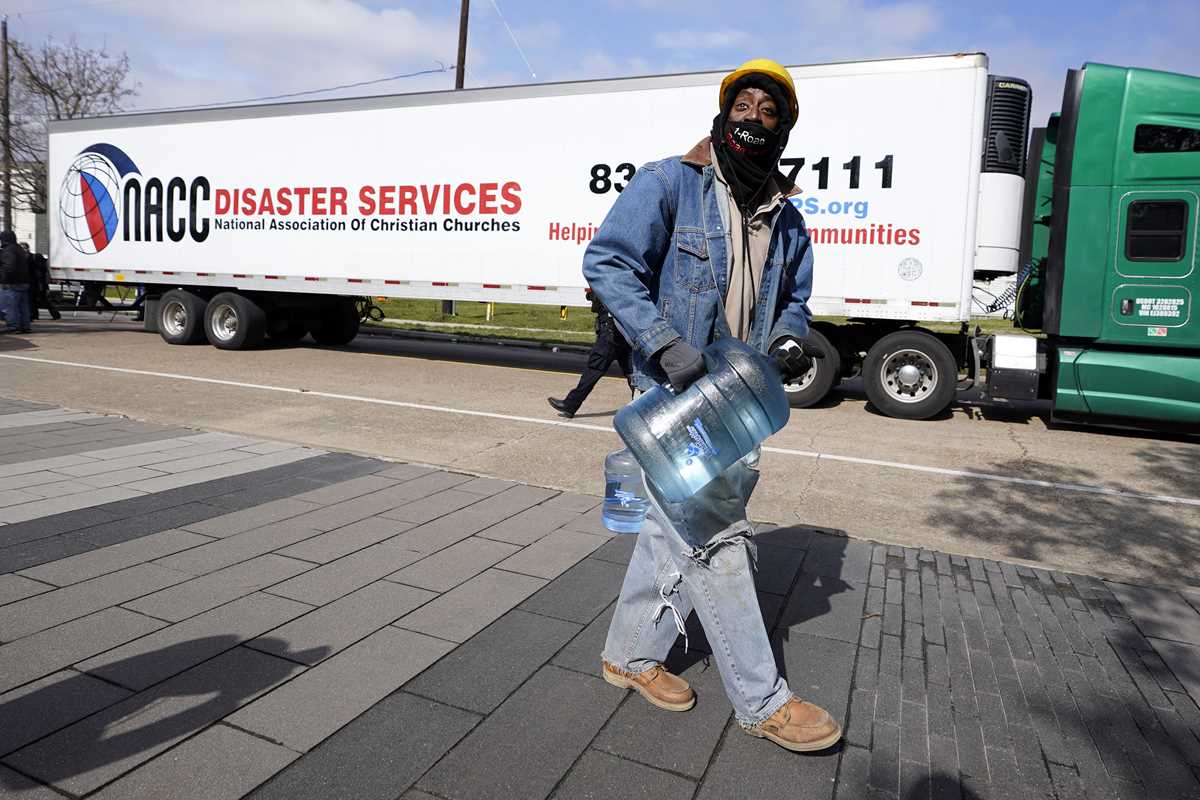 James White carries a bottle of donated water from a distribution site Thursday, Feb. 18, 2021, in Houston. Houston and several surrounding cities are under a boil water notice as many residents are still without running water in their homes. (AP Photo/David J. Phillip) 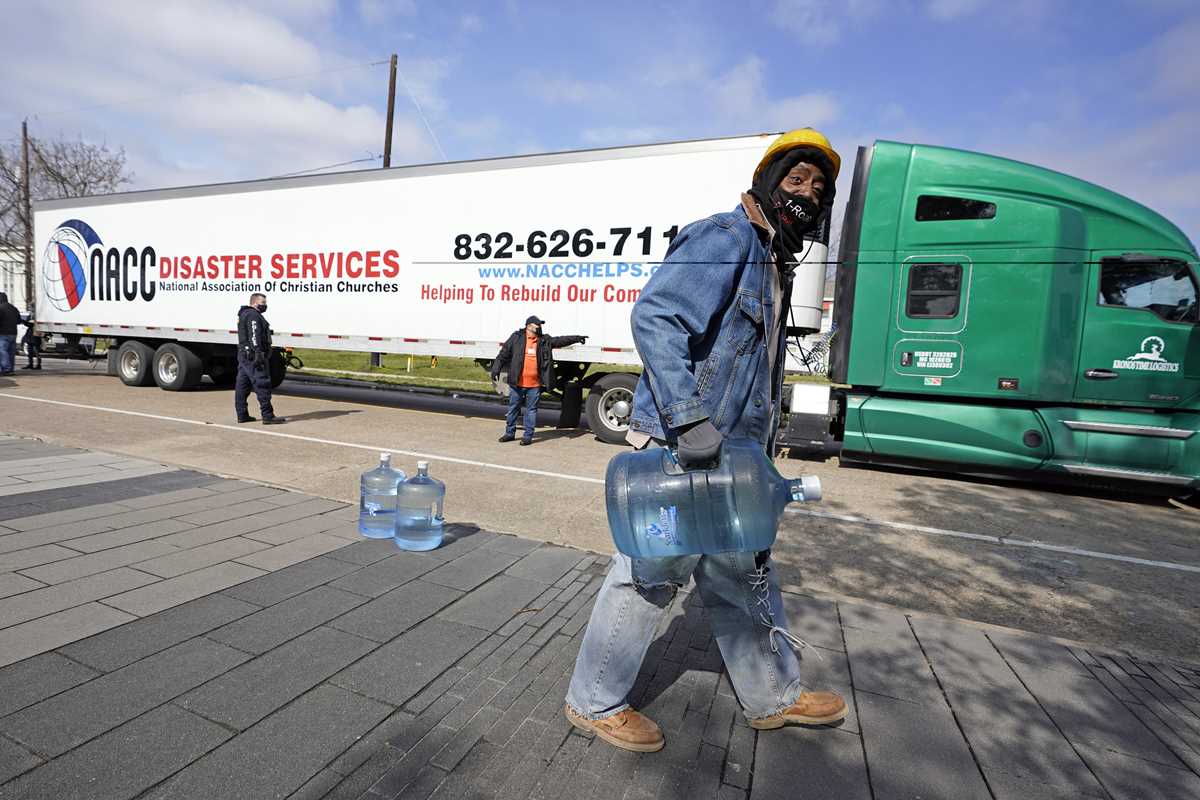 James White carries a jug of donated water from a distribution site, Thursday, Feb. 18, 2021, in Houston. Houston and several surrounding cities are under a boil water notice as many residents are still without running water in their homes. (AP Photo/David J. Phillip)

AUSTIN, Texas (AP) — As frozen Texas reels under one of the worst electricity outages in U.S. history, Republican Gov. Greg Abbott has blamed grid operators and iced-over wind turbines but gone easier on another culprit: an oil and gas industry that is the state’s dominant business and his biggest political contributor.

And as the toll deepened Thursday from a week of historic winter storms, which have killed more than 20 people in Texas, the dogpiling on a power grid that is proudly isolated from the rest of the country ignores warnings known by the state’s GOP leaders for years.

“It’s almost like a murder suspect blaming their right hand for committing the crime,” said Democratic state Rep. James Talarico. His suburban Austin home lost power for 40 hours and had no working faucets Thursday, when roughly 1 in 4 people in Texas woke up under instructions to boil water.

Like most of the state’s 30 million residents, Talarico’s power is controlled by grid managers at the Electric Reliability Council of Texas, which Abbott again laid into Thursday after more than 4 million people at one point were enduring outages in subfreezing temperatures.

But that is not where the responsibility ends, as power plants that feed the grid were knocked offline by the extreme cold, and natural gas producers didn’t protect wellheads from freezing. “ERCOT is a convenient whipping boy,” Talarico said.

The crisis has put the fossil fuel industry that lavishes the Texas Capitol with money in the crosshairs in ways that Abbott has not had to navigate when steering America’s second-largest state through other disasters, including hurricanes and the ongoing pandemic. For the first time Thursday, Abbott called on Texas to mandate that power plants be winterized.

Oil and gas built and enriched Texas, and with that its politicians, including those who became president. But none has reaped campaign contributions on the scale of Abbott, who in six years in office has raised more than $150 million from donors, more than any governor in U.S. history.

Texas’ energy interests are the biggest backers of his political rise, and he has not ruled out a White House run in 2024. More than $26 million of his contributions have come from the oil and gas industry, more than any other economic sector, according to an analysis by the National Institute on Money in Politics.

As Texas’ grid first began buckling early Monday, Abbott drew overnight backlash after going on Fox News and laying fault on solar and wind producers, at a time when natural gas, coal and nuclear energy systems were responsible for nearly twice as many outages.

Pressed on those comments later, Abbott took a softer tone and acknowledged every source of power had been compromised. But he accused ERCOT of misleading the public with messages that the grid was ready for the storm.

“It’s especially unacceptable when you realize what ERCOT told the state of Texas,” Abbott said.

ERCOT is overseen by the Texas Public Utility Commission, whose three members are appointed by Abbott. While ERCOT manages most of Texas’ power grid, the commission and the Texas Legislature make key policy decisions that have factored into the ongoing crisis.

After the state’s last major freeze, during the 2011 Super Bowl held in Arlington, Texas, a federal analysis found that energy producers’ procedures for winterizing their equipment “were either inadequate or were not adequately followed” in many cases. The report repeatedly cites another Texas freeze, in 1989, as a clear warning.

Girding power generators against fierce winter weather is essential in colder climates. In Iowa, where wind farms supply 40% of the state’s electricity, windmills have been turning all week despite temperatures that dropped to minus 17 degrees in Des Moines. In Texas, grid officials say they can’t speak for why power generators here don’t do the same.

A decade ago, the report on the last Texas failure lists a number of ways to winterize an oil well or a natural gas device and the estimated costs: installing a cold-weather production unit ($23,000), collecting gas vented from an injection pump to supply a heater ($675), or building a fiberglass hut to enclose the production equipment ($1,500).

Winterizing 50,000 wells — just under a third of the number of total natural gas wells active in Texas — was estimated in 2011 to cost as much as $1.75 billion, a figure that would almost certainly be higher today due to inflation. By comparison, the Texas oil and natural gas industry paid $13.9 billion in taxes and royalties last year alone, according to figures from the Texas Oil & Gas Association.

Republican Ryan Sitton, the former commissioner of the peculiarly named Texas Railroad Commission that regulates the state’s oil and gas industry, said an issue with bolstering power plants is the cost passed on to electric customers. Of Abbott’s focus on ERCOT, Sitton said, “Calling for an investigation is easy. Actually performing a good investigation and taking ownership of the results is where the rubber meets the road.”

He said oil and gas interests, which generously funded his own political campaigns, don’t hold the sway the public imagines.

“They make donations, sure. But unless the entire energy industry is speaking with a unified voice, which almost never happens, there’s not that much influence,” Sitton said.

7 Stocks That Will Help You Forget About the Fed

Normally when the Federal Reserve (i.e. the Fed) makes an announcement, the market reacts predictably. That’s due, in large part, to the nature of what the Fed normally announces. Will interest rates go up, down, or remain unchanged? And for their part, the markets have a pretty good idea what the Fed will do before they do it.

However, the market has been defying conventional wisdom and the Fed is not getting the inflation they want. So the Fed has basically said that they’re letting inflation go rogue. If it goes above their target 2% rate, so be it. The Fed is done trying to hit a target.
At first, the markets cheered the news. Not only was the Fed not taking away the punch bowl, but they were also going to keep the low rate liquidity going for a long time!

But after a little while to digest things, investors are realizing they have to be grown-ups about this. And now investors are considering how to rebalance their portfolios for the remainder of 2020.

I don’t know about them, but if I were you I would target companies that have a high free cash flow (FCF). Whether it’s your personal finances or in evaluating a stock, cash flow is your friend.

When a corporation has high FCF, they have more strong growth in good markets and more flexibility during when the economy is weaker.

As institutional investors come back into the market, it’s time for you to reposition your portfolio for whatever comes next.

View the “7 Stocks That Will Help You Forget About the Fed”.

Crude Oil (CL1) Down $0.15 Over Past 4 Hours, Tops All energy commodity; Moves Up For the 2nd Consecutive Day

I admit, I had been worried that SunPower (NASDAQ:SPWR) shares

Leading the Way in Federated States of Micronesia: Maybelline Andon-Bing

Retail trading app Robinhood has recently reported an increase in