In this April 12 2017 file photo, Arturo Di Modica holds a model of his Charging Bull sculpture during a news conference in New York. Di Modica, the artist who sculpted the bronze bull statue in New York, an iconic symbol of Wall Street, has died in his native Sicily. Di Modica died at his home in Vittoria on Friday, Feb. 19, 2021 the town said in a statement. (AP Photo/Craig Ruttle, File) 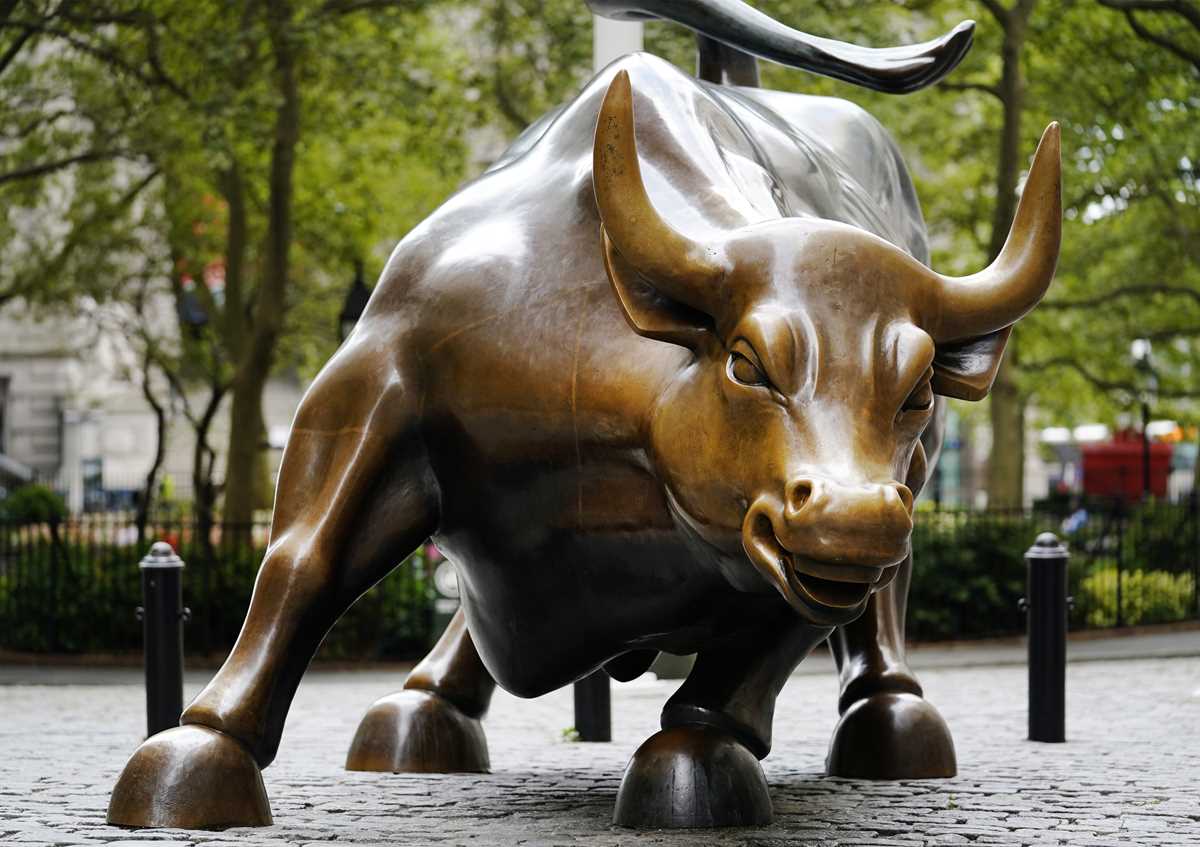 This Sept. 8, 2020 file photo shows The Charging Bull statue in New York’s financial district. Arturo Di Modica, the artist who sculpted the bronze bull statue in New York, an iconic symbol of Wall Street, has died in his native Sicily. Di Modica died at his home in Vittoria on Friday, Feb. 19, 2021 the town said in a statement. (AP Photo/Mark Lennihan, File) 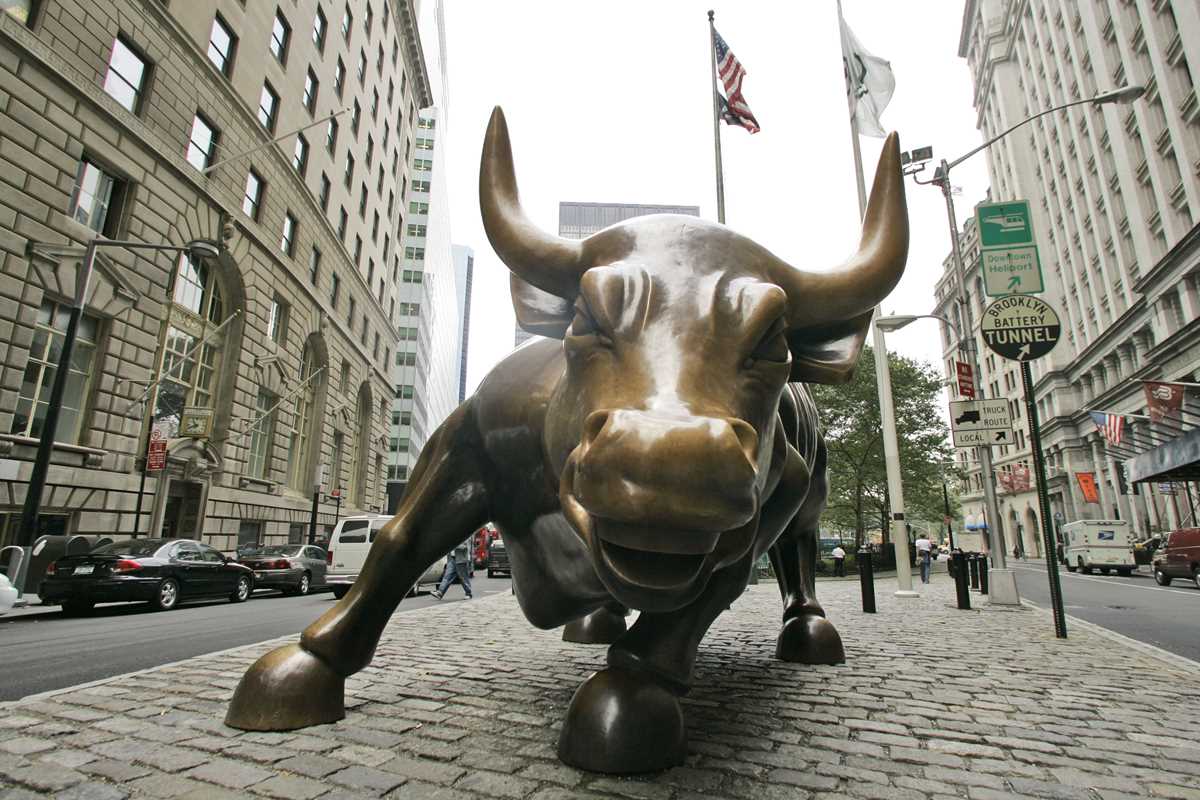 This Oct. 16, 2006 file photo showsThe charging bull in lower Manhattan in New York. Arturo Di Modica, the artist who sculpted the bronze bull statue in New York, an iconic symbol of Wall Street, has died in his native Sicily. Di Modica died at his home in Vittoria on Friday, Feb. 19, 2021 the town said in a statement. (AP Photo/Mary Altaffer, File)

ROME (AP) — The artist who sculpted Charging Bull, the bronze statue in New York which became an iconic symbol of Wall Street, has died in his hometown in Sicily at age 80.

Arturo Di Modica died at his home in Vittoria on Friday evening, the town said in a statement on Saturday. Di Modica had been ill for some time, it said.

The sculptor lived in New York for more than 40 years in New York. He arrived in 1973 and opened an art studio in the city’s SoHo neighborhood. With the help of a truck and crane, Di Modica installed the bronze bull sculpture in New York’s financial district without permission on the night of Dec. 16, 1989.

The artist reportedly spent $350,000 of his own money to create the 3.5-ton bronze beast that came to symbolize the resilience of the U.S. economy after a 1987 stock market crash.

“It was a period of crisis. The New York Stock Exchange lost in one night more than 20%, and so many people were plunged into the blackest of depressions,” Rome daily La Repubblica quoted Di Modica as saying in an interview earlier this month.

He said he conceived of the bull sculpture as “a joke, a provocation. Instead, it became a cursedly serious thing,” destined to be one of New York’s more visited monuments.

In the La Repubblica interview, Di Modica detailed how he, some 40 friends, a crane and a truck carried out a lightning-swift operation to plant the statue near Bowling Green park, a short stroll from the headquarters of the New York Stock Exchange, without official authorization.

“Five minutes. The operations shouldn’t have lasted more. Otherwise, we’d risk big,” he recalled. “After a couple of scouting trips, I had discovered that at night, the police made its rounds on Wall Street every 7-8 minutes.”

When the sculptor and his friends arrived at the spot he’d picked, they were surprised to see a Christmas tree had been erected there. They deposited the bronze bull anyway, and, as the artist told it, uncorked a bottle of Champagne.

Di Modica left Vittoria, Sicily, at age 19 for Florence, where he studied at the Fine Arts Academy.

At the time of his death, he was working on prototypes for a twin horse sculpture he planned to make for the Sicilian town. It was envisioned as a 40-meter-high (132-foot-high) work to be erected on the banks of a river.

The town declared Monday, when Di Modica’s funeral will be held in Vittoria’s St. John the Baptist Church, as an official day of mourning.

7 Post-Inauguration Stocks to Buy For Under $20

There’s a new occupant (officially) at 1600 Pennsylvania Avenue and the stock market is doing its part to promote unity. The Dow shot to a record high on Inauguration Day. We don’t imagine the honeymoon will last long. However it serves as a reminder that investors are more interested in the “what” more than “what party” when it comes to the way it moves.

With that said, many investors are attempting to read the tea leaves of the nascent Biden administration. One of the challenges will be that many of the usual suspects such as the FAANG stocks remain popular, yet frighteningly expensive (in terms of share price).

Valuation is in the eye of the beholder. But some investors may be looking for low-priced stocks that can get them more bang for their buck. The good news is that there are many stocks that you can buy for under $20 that not only show impressive growth, but are leaning in to the macroeconomic issues that will be present during at least the early part of the Biden administration.

In this special presentation, we’re giving you seven of our picks for low-priced stocks you can buy for under $20 today. But take note, these stocks may easily be over $20 in the next few months.

View the “7 Post-Inauguration Stocks to Buy For Under $20”.

I admit, I had been worried that SunPower (NASDAQ:SPWR) shares

Leading the Way in Federated States of Micronesia: Maybelline Andon-Bing

Retail trading app Robinhood has recently reported an increase in