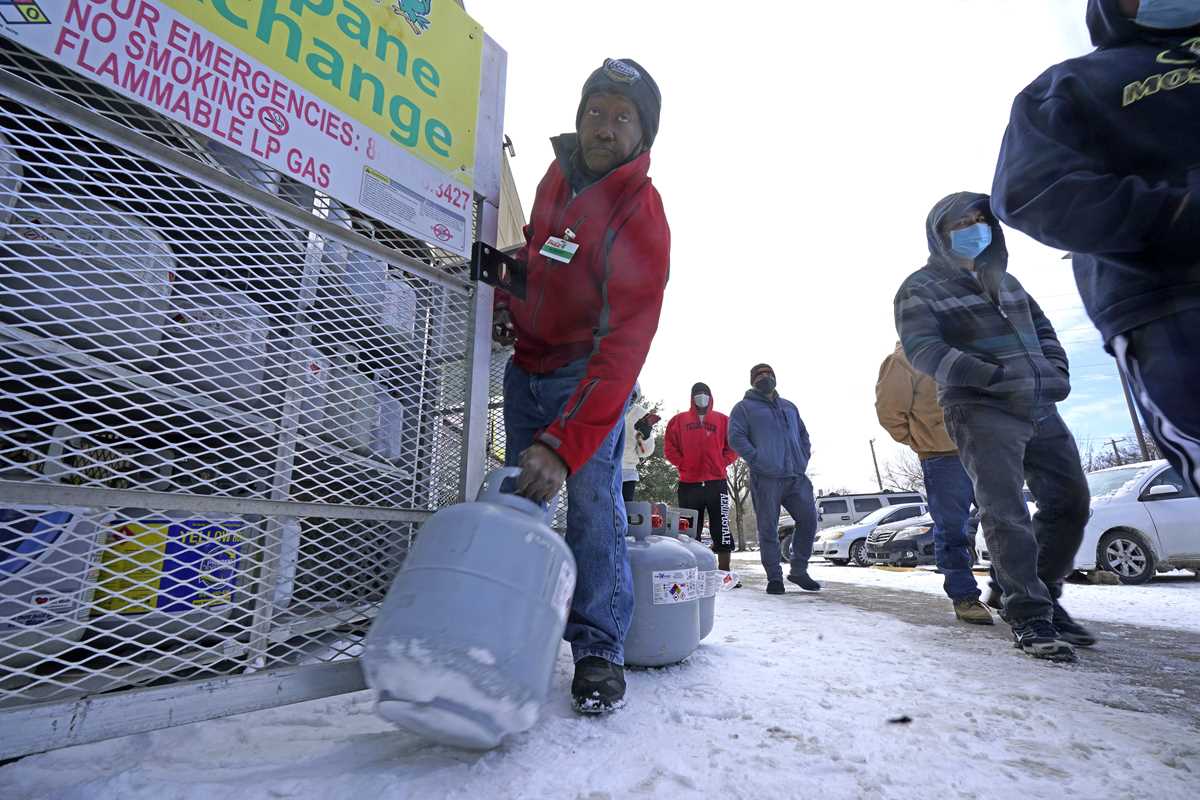 In this Feb. 16, 2021, file photo, Robert Webster pulls a full canister of propane for sale as customers line up to enter a grocery store in Dallas. As temperatures plunged and snow and ice whipped the state, much of Texas’ power grid collapsed, followed by its water systems. Tens of millions huddled in frigid homes that slowly grew colder or fled for safety. (AP Photo/LM Otero, File) 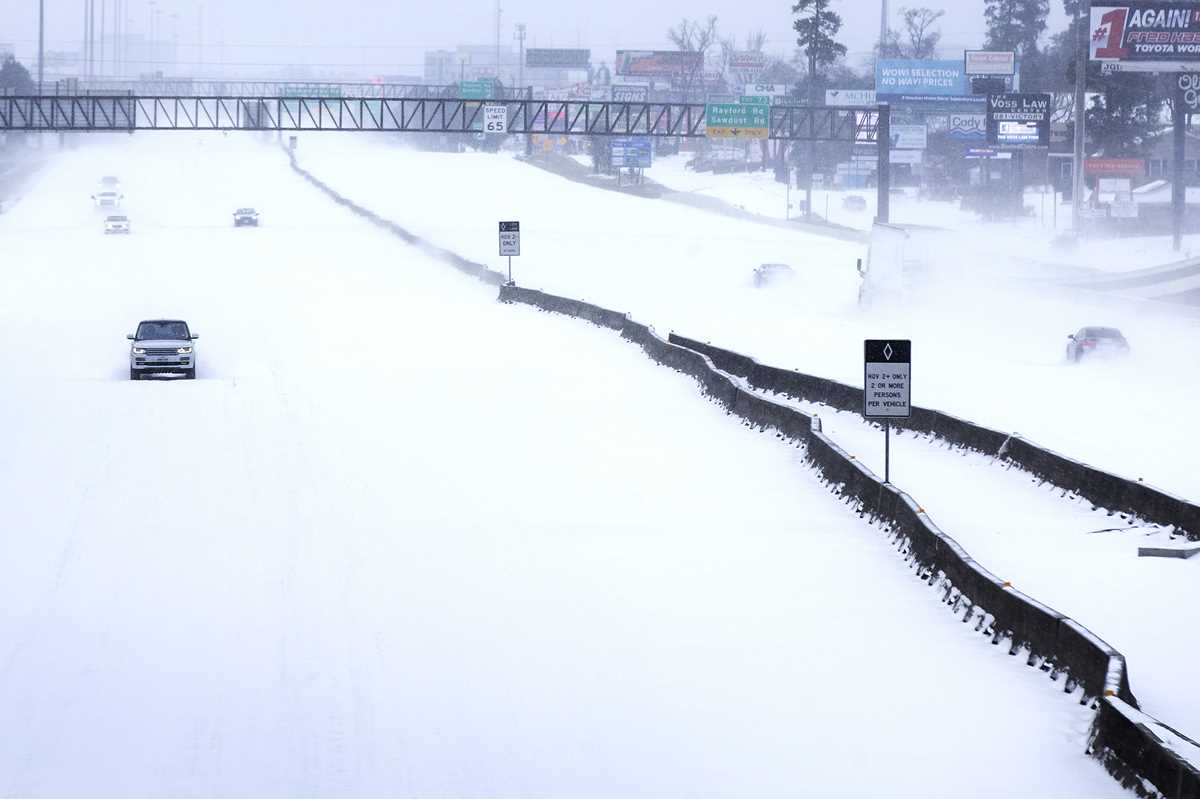 In this Feb. 15, 2021, file photo, traffic is sparse on the snow-covered Interstate 45 near The Woodlands Parkway following an overnight snowfall in The Woodlands, Texas. Temperatures plunged into the teens Monday with light snow and freezing rain. (Brett Coomer/Houston Chronicle via AP, File) 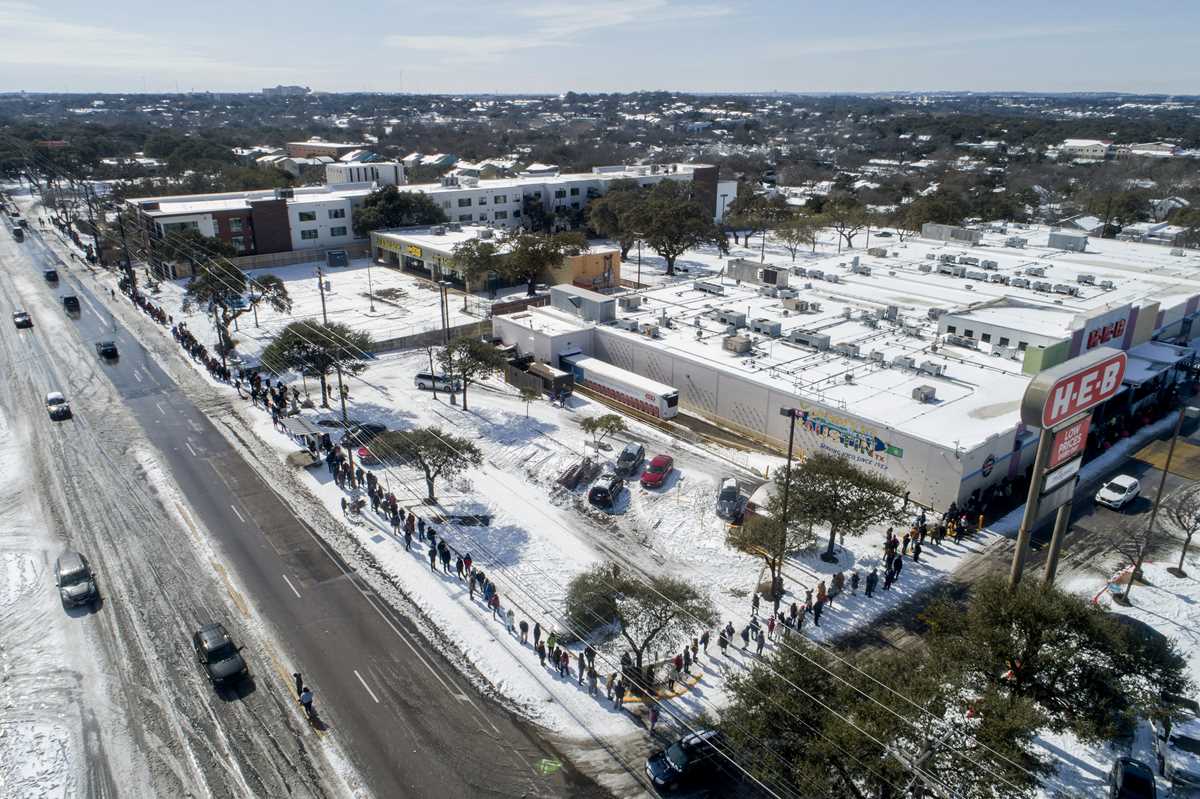 In this Feb. 16, 2021, file photo, people wait in a long line to buy groceries at H-E-B in Austin, Texas, during an extreme cold snap and widespread power outage. As temperatures plunged and snow and ice whipped the state, much of Texas’ power grid collapsed, followed by its water systems. Tens of millions huddled in frigid homes that slowly grew colder or fled for safety. (Jay Janner/Austin American-Statesman via AP) 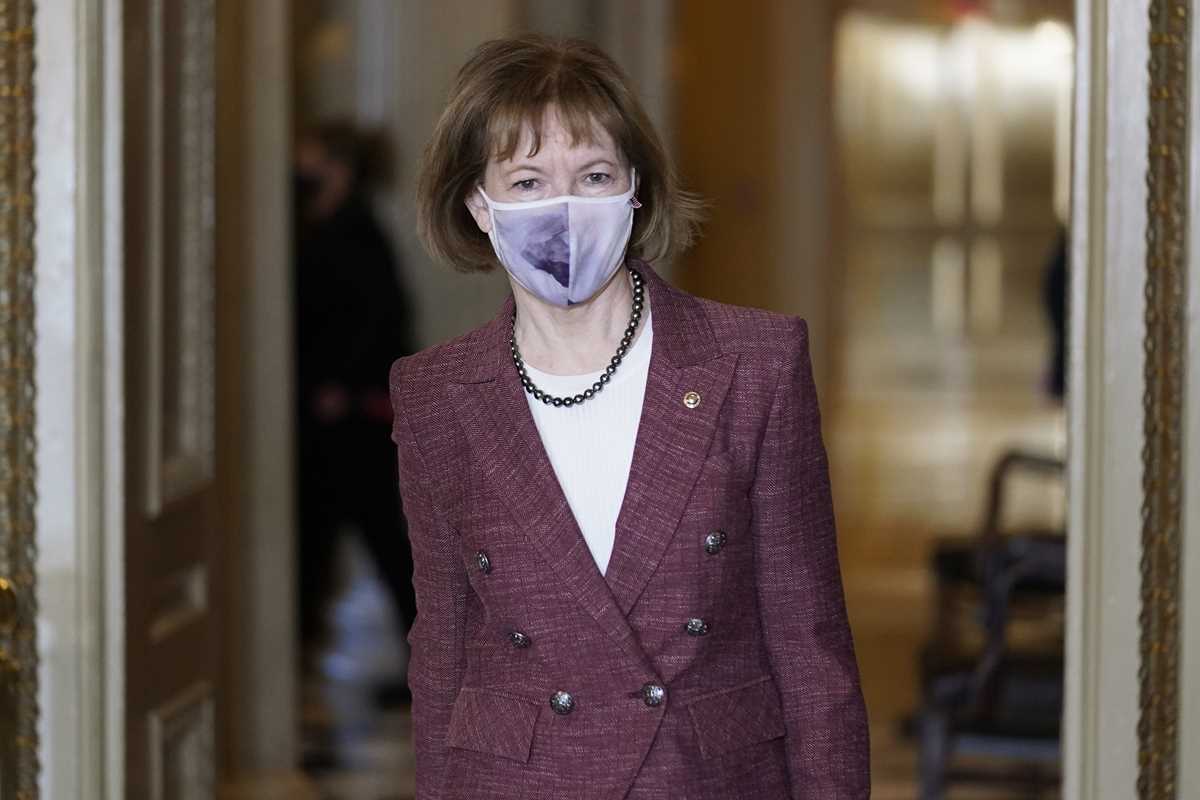 In this Feb. 10, 2021, file photo Sen. Tina Smith, D-Minn., arrives as opening arguments begin in former President Donald Trump’s impeachment trial, at the Capitol in Washington. Smith is calling for federal investigations into possible price gouging of natural gas in the Midwest and other regions following severe winter storms that plunged Texas and other states into a deep freeze that caused power outages in million of homes and businesses. (AP Photo/J. Scott Applewhite, File)

This Tuesday, Feb. 16, 2021 file photo shows power lines in Houston. A Democratic senator is calling for federal investigations into possible price gouging of natural gas in the Midwest and other regions following severe winter storms that plunged Texas and other states into a deep freeze that caused power outages in million of homes and businesses. (AP Photo/David J. Phillip, File)

In this Feb. 16, 2021, file photo people line up to fill their empty propane tanks in Houston. A Democratic senator is calling for federal investigations into possible price gouging of natural gas in the Midwest and other regions following severe winter storms that plunged Texas and other states into a deep freeze that caused power outages in million of homes and businesses. (Brett Coomer/Houston Chronicle via AP, File)

WASHINGTON (AP) — A Democratic senator is calling for federal investigations into possible price gouging of natural gas in the Midwest and other regions following severe winter storms that plunged Texas and other states into a deep freeze that caused power outages in millions of homes and businesses.

Minnesota Sen. Tina Smith says natural gas spot prices spiked as high as 100 times typical levels, forcing utilities and other natural gas users to incur exorbitant costs, many of which were passed on to customers.

In a letter sent Saturday to federal regulators, Smith said the price spikes will not just harm consumers, but could “threaten the financial stability of some utilities that do not have sufficient cash reserves to cover their short-term costs in this extraordinary event.” The letter was sent to the Energy Department, Federal Energy Regulatory Commission and the Commodities Futures Trading Commission. A copy of the letter was obtained by The Associated Press.

The extreme weather spurred residents from Mississippi to Minnesota to crank up electric heaters and pushed demand for electricity beyond the worst-case scenarios planned for by grid operators. At the same time, many gas-fired power plants in Texas and other states were knocked offline because of icy conditions, and some plants appeared to suffer fuel shortages as natural gas demand spiked nationwide.

At least 59 deaths across the U.S. have been blamed on the storms.

In Winfield, Kansas, the city manager reported that a unit of natural gas that sold for about $3 earlier this month sold for more than $400 on Thursday. City Manager Taggart Wall told KWCH-TV in Wichita that Winfield, which budgets about $1.5 million a year for natural gas, expects to pay about $10 million for the past week alone. Residential customers could see bills as high as $2,500 this month, he said.

In Morton, Illinois, officials reported that gas normally sold for about $3 per unit cost nearly $225 this week as demand soared because of the deep freeze.

While officials don’t know all the details of what happened, nor precisely how it will affect utility rates, “we do know this situation could be a significant financial burden for utilities and their customers,” especially as families in Minnesota and across the country struggle in the coronavirus pandemic and economic downturn, Smith said.

The Minnesota Public Utilities Commission has called a special meeting Tuesday to investigate what caused the dramatic spikes in natural gas prices in that state.

A spokeswoman for the Federal Energy Regulatory Commission, known as FERC, said the agency will review Smith’s letter and “respond in due course.”

A spokesman for the American Gas Association, which represents more than 200 local energy companies, said Feb. 14 and 15 set a record for the largest natural gas demand in U.S. history over a two-day period.

While natural gas utilities faced “unprecedented challenges” and “spot prices climbed in some regions due to spikes in demand, families and businesses that use natural gas were protected from higher prices by the careful planning of their utilities,” said Jake Rubin, a spokesman for the gas association. Most natural gas utilities use long-term contracts that seek to guarantee enough supply to meet demand and to lock-in affordable prices, he said.

Smith, in her letter to regulators, urged them to investigate conditions in the natural gas market over the last week, including any price gouging by natural gas producers and suppliers.

“A public report should detail what occurred, make recommendations to prevent such problems in the future and determine if laws have been broken,” she said. Smith also urged officials to invoke emergency authorities, including under the Natural Gas Policy Act and the Defense Production Act, to ensure natural gas is sold at fair prices during the current crisis.

The Biden administration and Congress should consider financial support to utilities and customers “that may be facing a cash crunch or rate increases as a result of the spike in natural gas prices,” Smith said.

15 Energy Stocks Analysts Love the Most

There are more than 450 energy companies traded on public markets. Given the sheer number of pipeline companies, power plant operators, oil and gas production companies, and other energy stocks, it can be hard to identify which energy companies will outperform the market.

Fortunately, Wall Street’s brightest minds have already done this for us. Every year, analysts issue approximately 8,000 distinct recommendations for energy companies. Analysts don’t always get their “buy” ratings right, but it’s worth taking a hard look when several analysts from different brokerages and research firms are giving “strong-buy” and “buy” ratings to the same energy stock.

This slide show lists the 15 energy companies with the highest average analyst recommendations from Wall Street’s equities research analysts over the last 12 months.

View the “15 Energy Stocks Analysts Love the Most”.

GameStop stock price is up nearly 400% in two days. Shall I invest amid WSB frenzy?