Alex Willen sits with his dog at his home, Thursday, Feb. 11, 2021, in San Diego. Willen was preparing to open a dog boarding business when the pandemic hit. Willen sensed the virus outbreak wouldn’t end quickly, which meant dog owners wouldn’t be traveling and many would keep working at home, eliminating the need for his services. He decided to restart a business he’d shelved in favor of boarding, dog treats. (AP Photo/Gregory Bull) 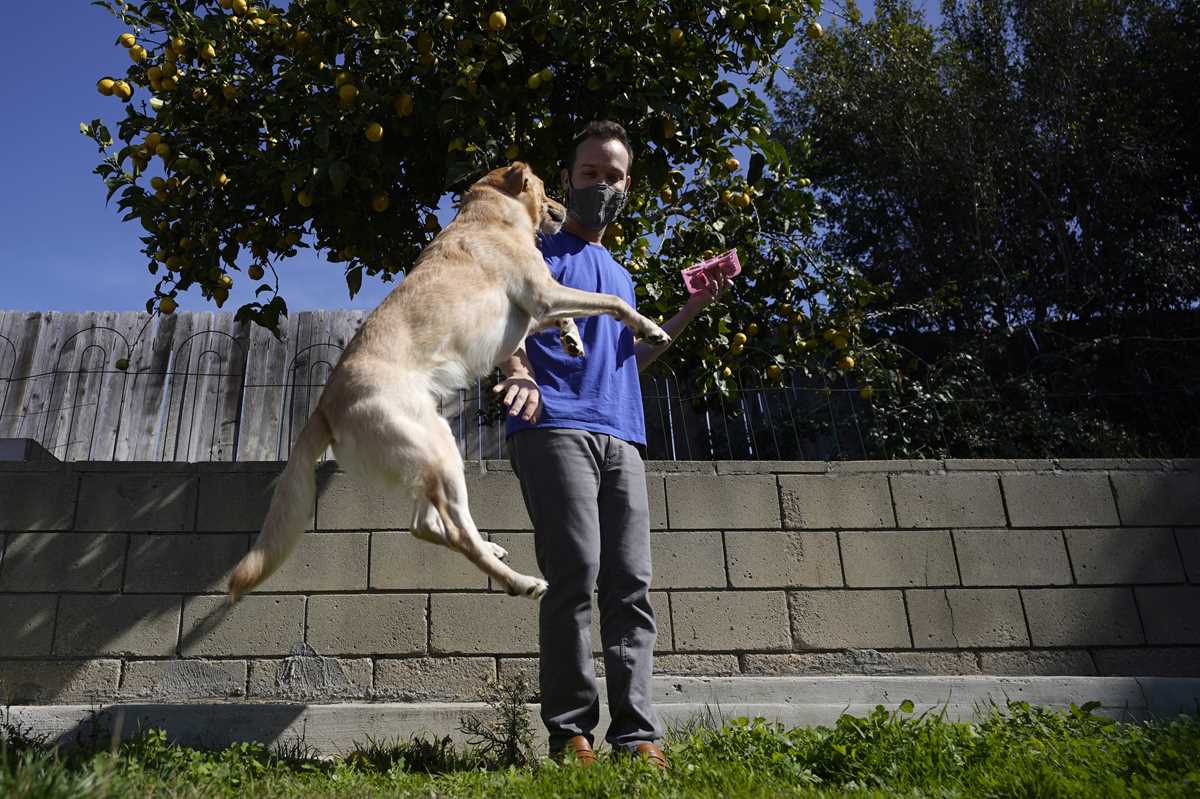 Alex Willen brings out treats for his dogs at his home, Thursday, Feb. 11, 2021, in San Diego. Willen was preparing to open a dog boarding business when the pandemic hit. Willen sensed the virus outbreak wouldn’t end quickly, which meant dog owners wouldn’t be traveling and many would keep working at home, eliminating the need for his services. He decided to restart a business he’d shelved in favor of boarding, dog treats. (AP Photo/Gregory Bull) 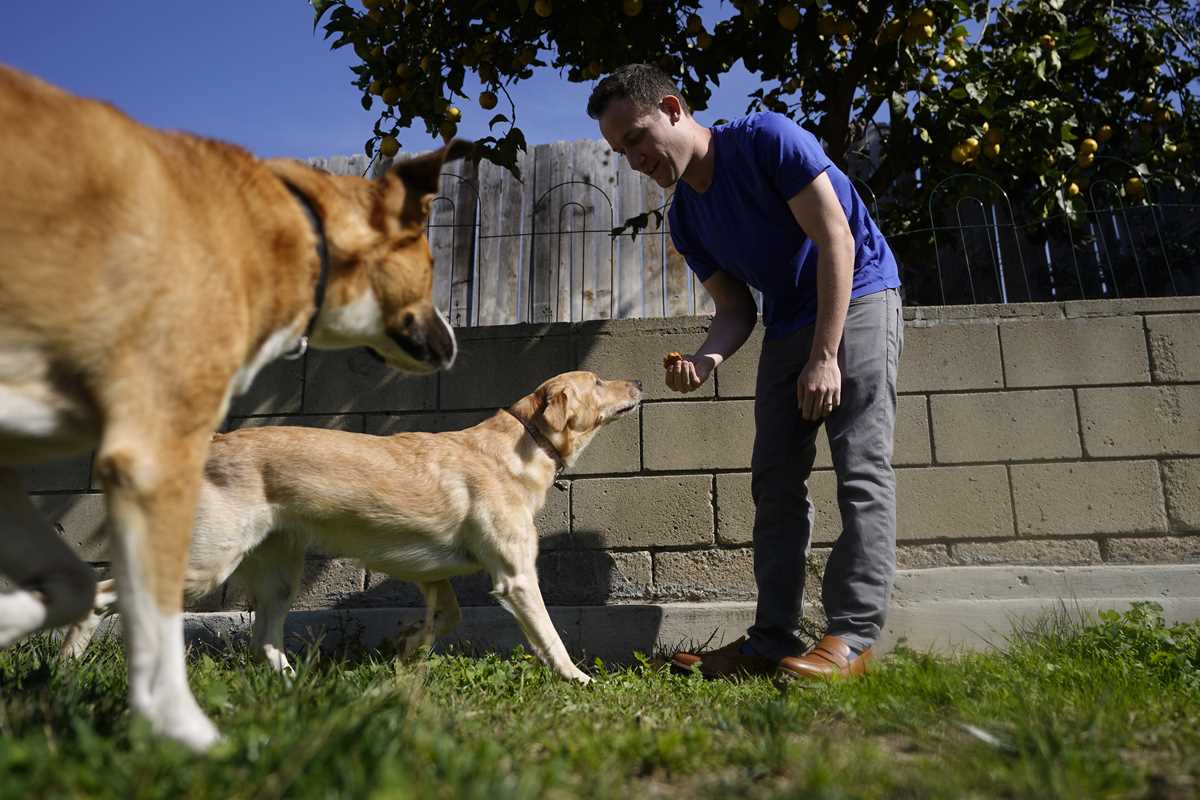 Alex Willen brings out treats for his dogs at his home, Thursday, Feb. 11, 2021, in San Diego. Willen was preparing to open a dog boarding business when the pandemic hit. Willen sensed the virus outbreak wouldn’t end quickly, which meant dog owners wouldn’t be traveling and many would keep working at home, eliminating the need for his services. He decided to restart a business he’d shelved in favor of boarding, dog treats. (AP Photo/Gregory Bull)

NEW YORK (AP) — As airlines slashed flights and furloughs appeared inevitable in the early days of the coronavirus pandemic, Mike Catania sensed there would be little need for a service that helped airline crews find short-term housing.

So, Catania and his fellow owners shut down Padloop in early March, even though the nearly year-old company had just broken even.

Catania started looking at how life was changing amid the pandemic and came up with the idea for his next business: Locaris, a website to help apartment renters connect with prospective neighbors to get the scoop on buildings and landlords. Because the pandemic limited people’s ability to meet in person, Locaris enabled renters to get the lowdown on a building safely.

“I tried to focus on, what is COVID a catalyst for? What trends is it bringing to market a couple of years ahead of schedule?” says Catania, who lives in Henderson, Nevada. Locaris launched in June and quickly found success.

As owners are forced to shut businesses, they’ve had to figure out what to do next. For entrepreneurs like Catania, the answer has been anticipating the next trend and creating a company to take advantage of it. Some owners have started businesses similar to those they lost, or companies that fill a different role in the same industry. Others have gone to work for someone else, while perhaps holding onto hopes of eventually reviving the businesses they shuttered.

It’s not known how many small businesses have failed in the pandemic, but different estimates all show devastation. Based on a projection last spring by the National Bureau of Economic Research, the number is likely well into the hundreds of thousands. Data from the work scheduling software company UKG shows that about one in six small businesses have closed their doors since the pandemic began. And the National Restaurant Association, a trade group, said 17% of U.S. restaurants, or more than 110,000, had permanently shut by Dec. 1; it’s likely that many were small or mid-sized businesses.

Alex Willen of San Diego was preparing to open a dog boarding business when the pandemic hit; he was about to sign papers for a Small Business Administration loan to cover construction costs when his bank said it was putting new business loans on hold. Willen sensed the virus outbreak wouldn’t end quickly, which meant dog owners wouldn’t be traveling and many would keep working at home, eliminating the need for his services.

By May, the loan money was available, but Willen decided to give up rather than open the business and not have revenue for months, maybe longer.

“It was looking like COVID was not going away by November or December, and those are huge months for dog boarding,” says Willen.

Willen soon decided to restart a business he’d shelved in favor of boarding: dog treats. Willen didn’t have to start at square one because he had already done some preliminary marketing and package design for the business.

Willen bakes for his two dogs, Cooper and Maple — which gave him the idea for Cooper’s Treats. He sells the treats on his website and Amazon.

Kathryn Valentine closed her consulting business last summer because she had lost her child-care options. Valentine’s nanny quit to take care of her own children, and daycare centers were closed. With a baby and a toddler, the Atlanta-based mother couldn’t work the 9-to-5 schedule followed by the apparel companies that were her clients. She had to come up with another line of work — and quickly.

She already was an expert in training women in negotiating, a skill necessary for career success. Valentine had researched the subject in business school, so she founded Worthmore Negotiations and began lining up corporate clients.

“About once a week I’ll have a commitment during the day, but otherwise all my work gets done after 7 p.m.,” she says. But Valentine hopes to revive her consulting business once the pandemic is over and she has child-care again. Her hope is to keep both businesses.

A series of lockdowns in Britain forced Steve West to close his acupuncture practice. With no money coming in, he returned to digital marketing, work that helped him get through a slowdown in his practice during the Great Recession. He’s not sure when, or if, he’ll return to acupuncture, given people’s uncertainty about close contact.

He’s also concerned that when life returns to normal, some clients will decide they’ve done just fine without acupuncture. Meanwhile, companies are in continual need of digital marketing, which helps them get more visibility in internet searches.

“This is the time to focus on this (digital marketing), and maybe come back to acupuncture in the future,” says West, who lives in Haywards Heath, in the south of Britain.

Kriti Sachdeva has a new job, with an agency that does e-commerce consulting. She had to shut her business that organized fairs and markets in Britain and other European countries; she had just five days’ notice that she had to cancel a fair in London last March, and five more events in the following months also were scraped.

In April, Sachdeva realized she needed to get a job. “I knew this was going to take a long time and I knew I couldn’t do nothing,” she says.

She landed her position in June. She loves the work and sees herself doing it long-term, but also wonders about someday possibly organizing fairs on the side.

“I think about it every day,” she says.

There is a situation developing in the U.S. that will drive revenue and profits for the transportation industry for many years to come. It started to develop with the pandemic, began to grow when the recession was less than expected, and was later compounded by an economic rebound that is much stronger than expected.

When the pandemic struck and lock-downs took effect manufacturers shuttered their plants and supply chains dried up. When Congress sent out the stimulus checks it sparked a round of consumer spending that has wiped products off of shelves. Now, with inventories across industries reportedly down high-single to low-double digits from the previous year, there is a need for 1) manufacturing to meet demand and rebuild inventory and 2) transportation/shipping that is growing by the day.

We have compiled a list of 7 transportation stocks that can’t be ignored,