In this March 30, 2020 file photo, Venezuela’s Foreign Minister Jorge Arreaza, wearing protective gloves as a preventive measure against the spread of the new coronavirus, holds a Venezuelan and Chinese flag as medical specialists and supplies arrive from China at the Simon Bolivar International Airport in La Guaira, Venezuela. While the pandemic has opened the door to much-welcomed Chinese aid in Latin America and Caribbean, it’s also made it harder for governments to pay their bills to Beijing, due to a deep recession last year wiped out nearly a decade’s worth of growth, according to International Monetary Fund data. (AP Photo/Matias Delacroix, File) 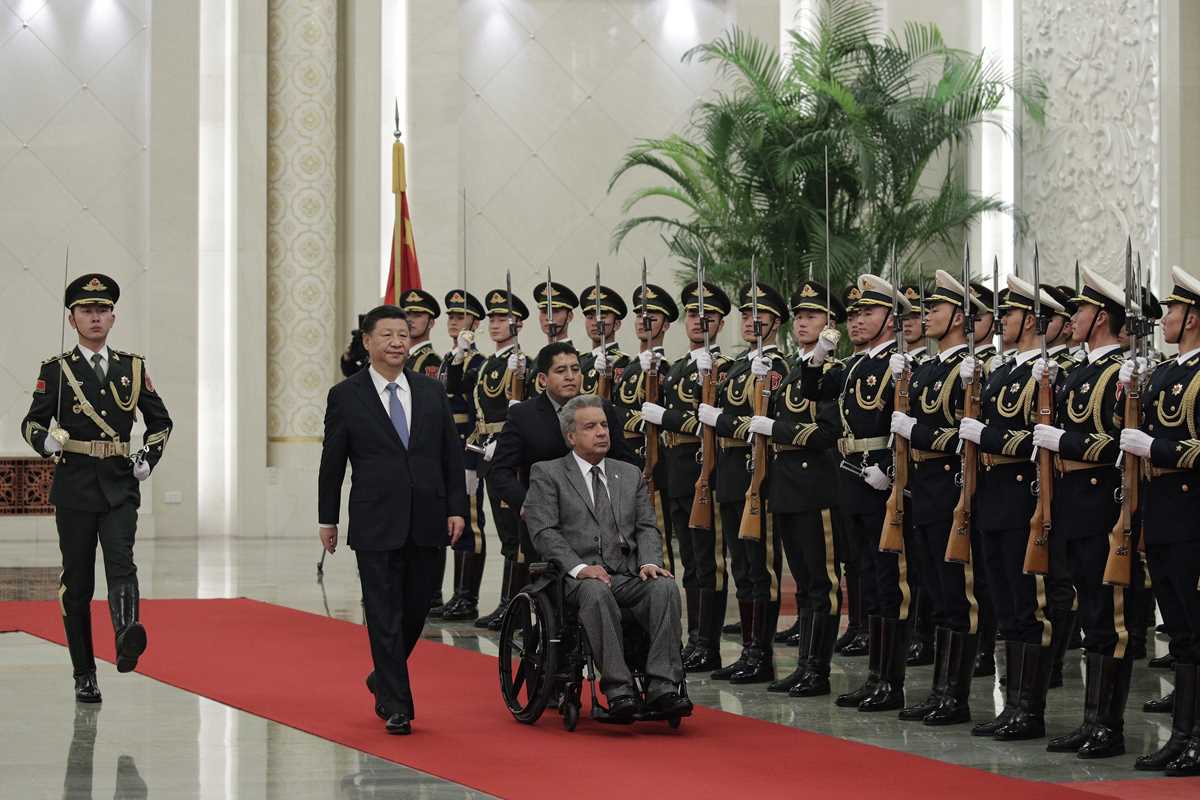 In this Dec. 12, 2018 file photo, Ecuador’s President Lenin Moreno, right, and Chinese President Xi Jinping review an honor guard during a welcome ceremony at the Great Hall of the People in Beijing, China. In 2020, Ecuador negotiated to delay for a year nearly $900 million in debt payments serviced by oil shipments, and in 2021 the U.S. International Development Finance Corporation signed an agreement with Ecuador to finance up to $2.8 billion in infrastructure projects, money that it said could be used to “refinance predatory Chinese debt.” (AP Photo/Andy Wong, File) 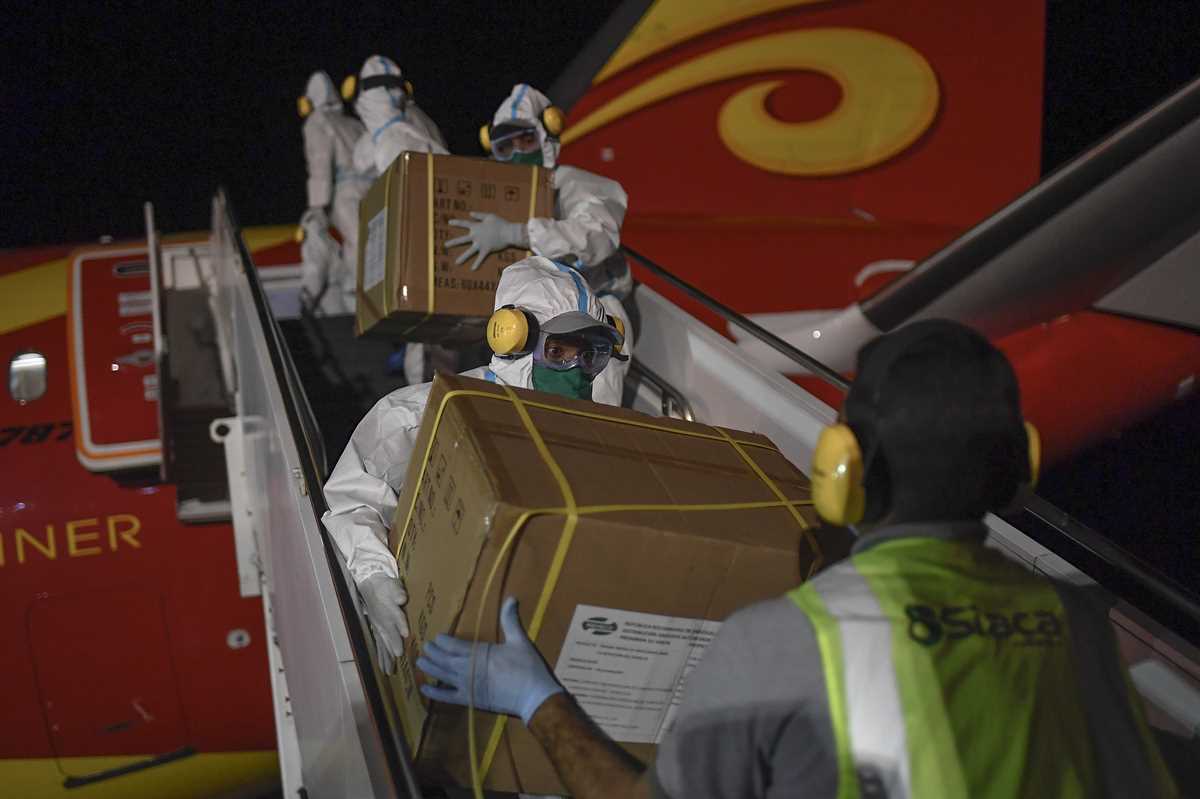 In this March 30, 2020 file photo, Venezuelan workers, wearing protective face masks and suits as a preventive measure against the spread of the new coronavirus, unload humanitarian aid from China at the Simon Bolivar International Airport in La Guaira, Venezuela. China donated more than $215 million in supplies to allies in the region, and conducted clinical trials or plans to manufacture vaccines in five countries. (AP Photo/Matias Delacroix, File)

MIAMI (AP) — It seemed like a match made in finance heaven.

In 2010, China, its economy roaring and state companies looking to expand globally, set its eyes on Latin America, a region starved of capital but rich in natural resources the Asian giant lacked. The result: a record $35 billion in state-to-state loans that year.

Fast forward a decade and the once-torrid relationship is starting to mature in ways that suggest China may be growing wary of its once do-no-wrong partner.

For the first time in 15 years, China’s two biggest policy banks — the China Development Bank (CDB) and the Export-Import Bank of China — made no new loans to the region in 2020, capping a multi-year slump driven by Latin America’s worsening economic slide.

The data comes from a new repor t by the Inter-American Dialogue, a Washington think tank, and Boston University’s Global Development Policy Center, both of which have been tracking for years China’s yuan diplomacy in Washington’s backyard.

China’s growing economic and diplomatic influence in the region has worried U.S. policymakers, who have been at a loss to counter its rise. The task now falls to the Biden administration, which has warned that the Chinese footprint in the region is a national security threat. But with China having displaced the U.S. as the top trading partner of several South American nations, catching up will be no easy task.

Meanwhile, the U.S. may have fallen even farther behind during the pandemic, when China donated more than $215 million in supplies — from surgical gloves to thermal imaging technologies — to allies in the region, according to the research. By comparison, the United State Agency for International Development and State Department has provided $153 million. China also conducted clinical trials or plans to manufacture vaccines in five countries — Argentina, Brazil, Chile, Mexico and Peru.

“Without a doubt part of the region’s COVID response has a Chinese face,” said Rebecca Ray, a Boston University economist and one of the authors of the new report. “It’s a missed opportunity for the U.S. but since the bottoming out of American manufacturing in the 1990s there’s really no way to compete. Many of the same medical supplies China ships to Latin America we buy from China as well.”

But while the pandemic has opened the door to much-welcomed Chinese aid, it’s also made it harder for governments to pay their bills to Beijing. A deep 7.4% recession in the Latin America and Caribbean last year wiped out nearly a decade’s worth of growth, according to International Monetary Fund data.

With borrowers squeezed, China has taken a hit. Last year, Ecuador negotiated to delay for a year nearly $900 million in debt payments serviced by oil shipments. Venezuela — by far the region’s biggest borrower — is believed to have received a similar grace period. At the same time,

“With the region facing unprecedented challenges, China is unlikely to lend any more for now,” said Margaret Myers, head of the Asia-Latin America program at the Dialogue. “Instead it has to grapple with its own problematic portfolio.”

The slowdown in lending to Latin America reflects a broader, global pullback, as China turns inward to bolster its own recovery efforts amid the pandemic. The ruling Communist Party has lent billions of dollars to build ports, railways and other infrastructure across Asia to Africa, Europe and Latin America in order to expand China’s access to markets and resources.

But Beijing has grown more cautious after some borrowers struggled to repay loans. Officials say they will examine projects and financing more carefully.

The China Development Bank and the foreign ministry didn’t respond to questions about the reasons for the decline in Chinese loans to Latin America.

Even though lending has dried up, Chinese buying of Latin America’s soybeans, iron ore and other commodities remained robust, at an estimated $136 billion. That’s despite a sharp rise of China’s purchases of American farm goods, a promise reached with the Trump administration to end a debilitating trade war.

Chinese state-run energy companies also aggressively bought up at fire sale prices energy assets from exiting Western investors. Overall, Chinese mergers and acquisitions surged to $7 billion in 2020, nearly double the amount of activity in 2019, according to the research.

Among the deals: the sale of Peru’s largest electric company by San Diego, CA-based Sempra Energy to China Three Gorges Corp. Another $5 billion deal giving State Grid Corp. of China control of a major utility in Chile was announced last year but not included in the data because it hasn’t been finalized.

For the region’s leaders, Chinese loans for big ticket infrastructure projects are hard to resist. Interest rates are low and unlike loans from the World Bank and IMF there are fewer strings attached and approval is faster, allowing leaders to tout accomplishments in time for the next election.

Even Colombia — Washington’s staunchest regional ally and a country that was cool to China’s entreaties — recently jumped on the bandwagon. Last year, a consortium including China Harbour Engineering Company broke ground on the capital Bogota’s first metro, a $3.9 billion project. No American firms placed bids for the project, which did not directly benefit from any Chinese loans.

U.S. officials have tried to push back, pointing out that U.S. overseas assistance is longstanding and more transparent.

“Beijing’s assistance in the region is generally aimed at advancing the People’s Republic of China’s commercial or political interests,” the State Department’s Bureau of Western Hemisphere Affairs said in a statement.

In January, at the end of the Trump administration, the U.S. International Development Finance Corporation signed an unprecedented agreement with Ecuador to finance up to $2.8 billion in infrastructure projects, money that it said could be used to “refinance predatory Chinese debt.”

But the DFC’s total funding — $60 billion — pale in comparison to the $1 trillion that China has earmarked for its “Belt and Road” initiative to expand influence around the world.

The U.S. loan package to Ecuador was significant because it also would require the government to privatize oil and infrastructure assets and to ban Chinese technology.

“This definitely would limit China’s influence,” said Myers. “But by burdening future generations with more debt, and encouraging the use of fossil fuels, does it really help Ecuador in the long run? If it doesn’t, then it could backfire against the U.S.”

Top Ten Brokerages You Can Trust

There are more than 500 brokerages and research houses that hire analysts to issue ratings and recommendations. Collectively, these brokerages and their analysts publish approximately 250,000 ratings each year. Every trading day, there are nearly 700 reports and recommendations that are released to the public. To say that it’s difficult to separate the signal from the noise when interpreting this data would be an understatement.

MarketBeat has developed a system to track each brokerage and research house’s stock recommendations and score them based on their past performance. If Goldman Sachs predicted that Apple’s stock price would hit $150.00 on a specific date, how accurate were they? If Bank of America issued a “strong-buy” rating on a stock, how did that stock perform compared to the broader market over the following twelve months? This tracking system has been applied to the 1,000,000+ ratings that MarketBeat has tracked during the last ten years to identify which brokerages you can really trust (and which you can safely ignore).

This slide show lists the 10 brokerages who have issued the most accurate analyst recommendations over the past several years, as measured by the performance of their “buy” ratings and the accuracy of their price targets.

View the “Top Ten Brokerages You Can Trust”.

US jobless claims fall to 730,000 but layoffs remain high with economy still under pressure from virus

Hermes International : Herms opens its newly renovated and expanded store in Lyon, strengthening its long-standing ties with the city of the silk