In this Wednesday March 10, 2021 photo provided by the New York Stock Exchange, trader Phyllis Arena Woods works on the trading floor. A year earlier, a terrifying free fall for the stock market suddenly ended, ushering in one of its greatest runs. (Nicole Pereira/New York Stock Exchange via AP) 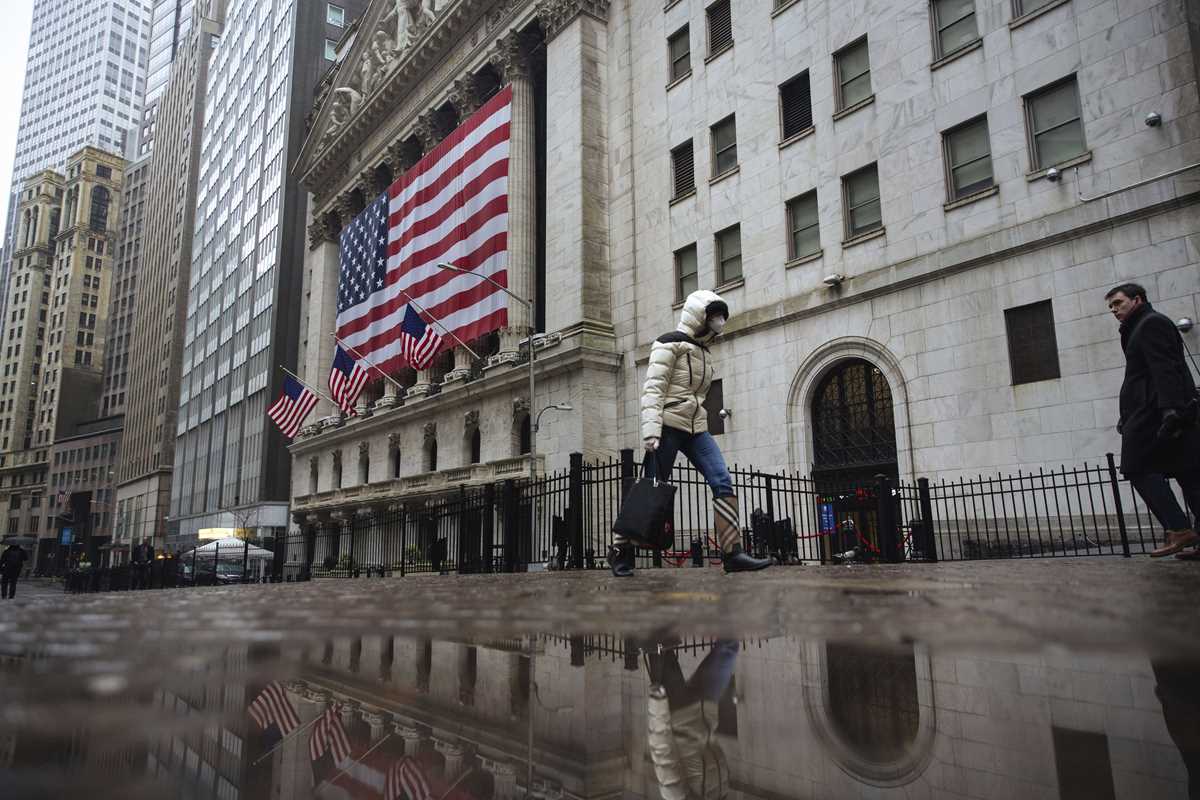 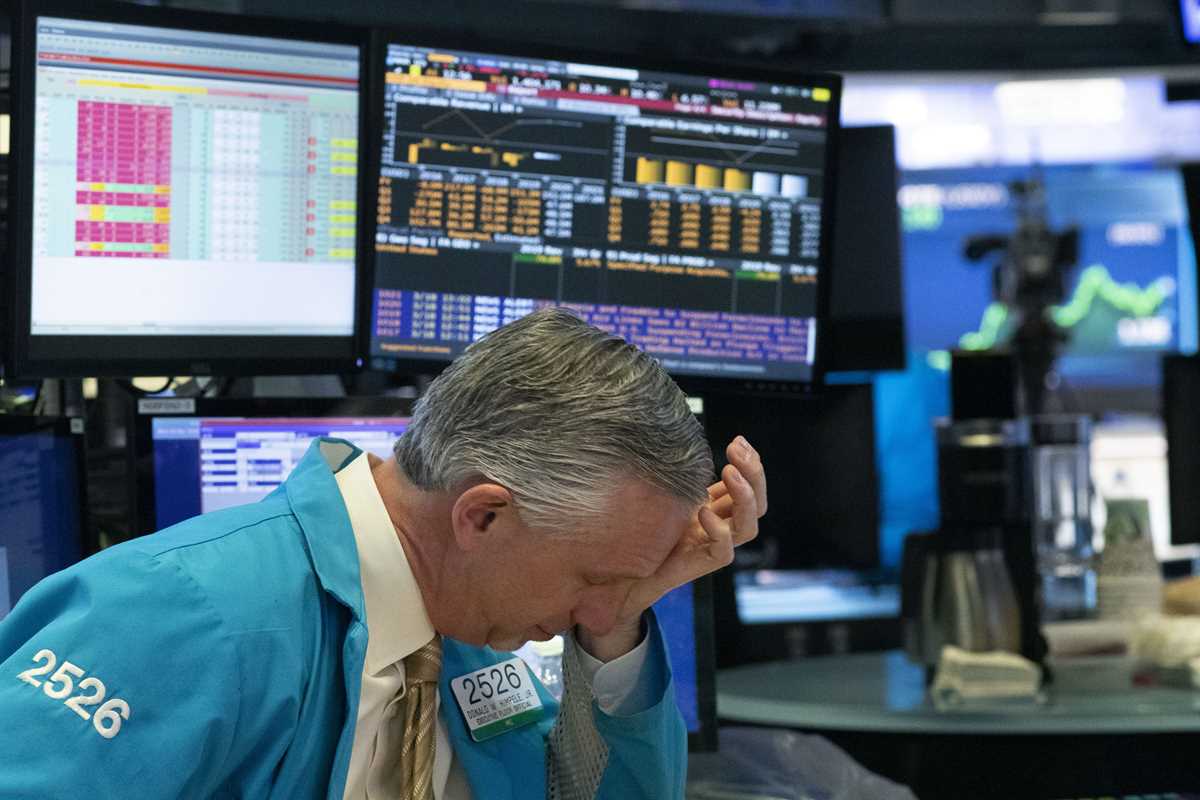 In this Wednesday, March 18, 2020 file photo, a trader holds his hand to his head after trading was halted at the New York Stock Exchange in New York. On March 23, 2020, the S&P 500 fell 2.9%. In all, the index dropped nearly 34% in about a month, wiping out three years’ worth of gains for the market. (AP Photo/Mark Lennihan)

NEW YORK (AP) — It was one year ago that the terrifying free fall for the stock market suddenly ended, ushering in one of its greatest runs.

That turned out to be the bottom, even though the coronavirus pandemic worsened in the ensuing months and the economy sank deeper into recession. Massive amounts of support for the economy from the Federal Reserve and Congress limited how far stocks would fall. The market recovered all its losses by August.

As time passed, the quick development of coronavirus vaccines helped stocks shoot even higher. So did growing legions of first-time investors, who suddenly had plenty of time to get into the market using free trading apps on their phones.

It all led to a )76.1% surge for the S&P 500 and a shocking return to record heights. This run looks to be one of, if not the, best 365-day stretches for the S&P 500 since before World War II. Based on month-end figures, the last time the S&P 500 rose this much in a 12-month stretch was in 1936, according to Howard Silverblatt, senior index analyst at S&P Dow Jones Indices.

All the furious movement has also raised worries that stock prices may have gone too far, too fast. Here’s a look at five trends that helped shape the market over the last year:

— TWO BULL MARKETS IN ONE

Wall Street’s big rally actually had two distinct stages. Early on, Big Tech stocks and winners of the suddenly stay-at-home economy pulled the market higher. Amazon benefited as people shopped more online, Apple hoovered up sales as more people worked from home and Zoom Video Communications surged as students and adults started meeting online. Tech stocks as a group are the market’s biggest by value, so their gains helped make up for weakness across other sectors as the economy continued to struggle.

Since last autumn, though, excitement for an economic liftoff has caused a more widespread upturn. Banks, energy producers and smaller companies whose profits would be the biggest beneficiaries of a stronger economy have led the way, as coronavirus vaccines roll out and Washington delivers even more financial aid. Those gains are also picking up the slack for technology stocks, which have lost momentum as interest rates rise on worries about higher inflation.

Stuck at home with little to do, people looked for ways to use some dollars that might have otherwise been spent on a movie, restaurant meal or vacation. Many turned to the stock market via their phones, as trading apps made it easy to buy and sell shares with a few taps, commission free.

Clients under the age of 40 accounted for 35% of trading last month at Charles Schwab, nearly double the rate of two years earlier. Accounts less than a year old are doing more trading in total at Charles Schwab than accounts that have been around more than 10 years.

Many of those traders have been using money they got as stimulus payments from the U.S. government. The Robinhood trading app popular with many novice investors saw an increase in the percentage of deposits of exactly $1,200 or $2,400 after the government sent out checks for those amounts last spring, just after the stock market hit bottom, for example. A new round of government payments — $1,400 to individuals — is underway.

Social media has only amplified the trend, as traders talk on Reddit, Twitter and elsewhere about what stocks to buy. They’ve been helping to push up the stock market broadly, but their influence is most evident in what have come to be known as “meme stocks.” GameStop surged 1,625% in January, for example, even though the video game retailer has struggled financially. The gains for GameStop, AMC Entertainment and other meme stocks defied gravity — and, in the opinion of nearly every professional investor on Wall Street, common sense.

All the mania around stocks has raised worries along Wall Street that prices may have shot too high. Much of the criticism is focused on how much faster stock prices climbed than corporate profits.

Another potential signal of too much greed and not enough fear: Investors are so hungry for the next big thing that they’re pouring billions of dollars into investments, before they even know what the money could go toward. These investments are called special-purpose acquisition companies, though they’re better known by their acronym, SPACs. Armed with cash raised from investors, SPACs look for privately held companies to buy so that the company can easily list its stock on an exchange.

The coronavirus really knows no geographic boundaries. As it devastated populations and economies around the world, global financial markets sustained sharp losses.

The recovery has also been worldwide. Stocks from China, South Korea and other emerging markets as a group are up almost the exact same percentage as the S&P 500 since March 23, 2020. Japan’s Nikkei 225 index is also up a similar amount.

European markets have been lagging, although their performance is much better when seen in dollar terms instead of euros. Worsening infection rates are raising worries of a “third wave” on the continent and are forcing governments to bring back some restrictions on daily life. But the hope is that the continued rollout of vaccines will get economies and trade back to normal across the world.

— WHO’S GETTING LEFT BEHIND?

Even with so many first-time investors joining the market, not everyone is benefiting from rising stocks. Only a little more than half of all U.S. households owned stocks in 2019, whether by day-trading stocks or holding an S&P 500 index fund in a 401(k) account.

Likewise, not every stock has participated in the market’s run higher over the last year. A handful of stocks within the S&P 500 are actually lower, headlined by Gilead Sciences, which is down 9.8%. The stock soared early in the pandemic as its remdesivir drug became a treatment for COVID-19 but fell back in part on concerns about upcoming patent expirations.

Other early stock winners of the pandemic have also tailed off since the market took off a year ago, including Clorox, whose disinfecting wipes became like currency, and Spam-maker Hormel Foods.

7 Stocks That Could Provide a Year-End Rally

It’s rough in the markets right now. Underlying the volatility is uncertainty. The VIX Index (INDEXCBOE: VIX) otherwise known as the Fear Index is unofficial, but an eerily accurate predictor of market sentiment. And the VIX is up 30% in the last month.

Is this uncertainty due to concerns over additional lockdown measures? Is it about the lack of additional coronavirus stimulus? Is the market reacting to a surge in jobless claims? Or is this just the somewhat normal volatility that comes in an election year that promises to be like none in American history.

The answer is all of the above and then some. But does that mean you should stay out of equities? I don’t think so. Where are you going to go? The Fed has promised interest rates are going nowhere fast. And that bit of news is weighing down the bond market.

So stocks it is. But although growth-seeking investors may be tempted to look at the tech sector to see what’s on sale today, I suggest taking a more targeted approach. Rather than looking at a single sector, try to look at solid performers in different sectors that may be ready to surge over the last three months.

The pandemic brought the entire market down. But once investors took a breath they found bargains. And if you had the courage to put your money to work in those stocks, you’ve been rewarded.

Times like these call for the same type of courage. And that’s why we’ve put together this special presentation with seven stocks that look ready to surprise investors with nice end-of-year gains.

View the “7 Stocks That Could Provide a Year-End Rally”.

Australia stocks higher at close of trade; S&P/ASX 200 up 0.08% By biedex.markets

The Malaysian government said on Wednesday the country’s oil sector

The Hourly View for Gold At the time of this

Arcutis Biotherapeutics Inc (NASDAQ: ARQT) has announced the presentation of new safety and