A woman walks at the Old Town Square in Prague, Czech Republic, Monday, March 22, 2021. A group of activists painted the crosses to criticize the government’s response to the coronavirus pandemic. (AP Photo/Petr David Josek) 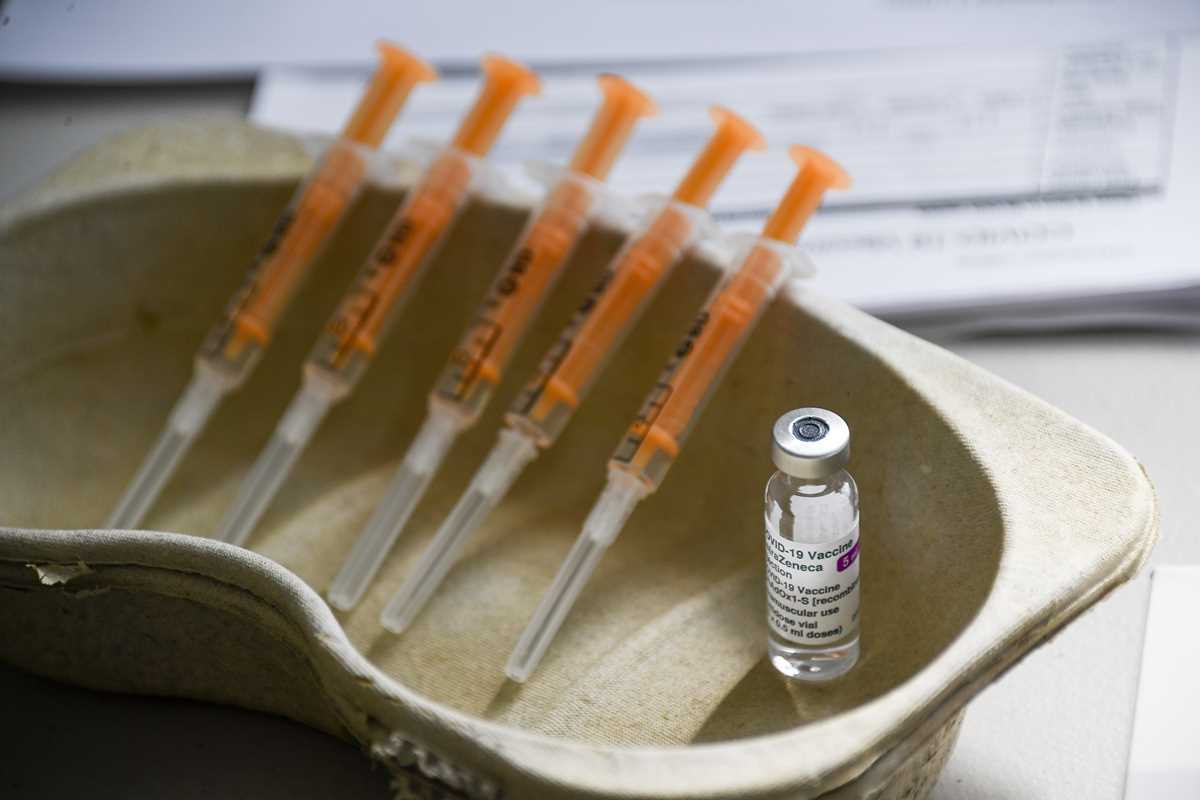 In this Sunday, March 21, 2021 file photo a vial and syringes of the AstraZeneca COVID-19 vaccine, at the Guru Nanak Gurdwara Sikh temple, on the day the first Vaisakhi Vaccine Clinic is launched, in Luton, England. AstraZeneca said Monday March 22, 2021 that advanced trial data from a U.S. study on its COVID vaccine shows it is 79% effective. The U.S. study comprised 30,000 volunteers, 20,000 of whom were given the vaccine while the rest got dummy shots. (AP Photo/Alberto Pezzali, File) 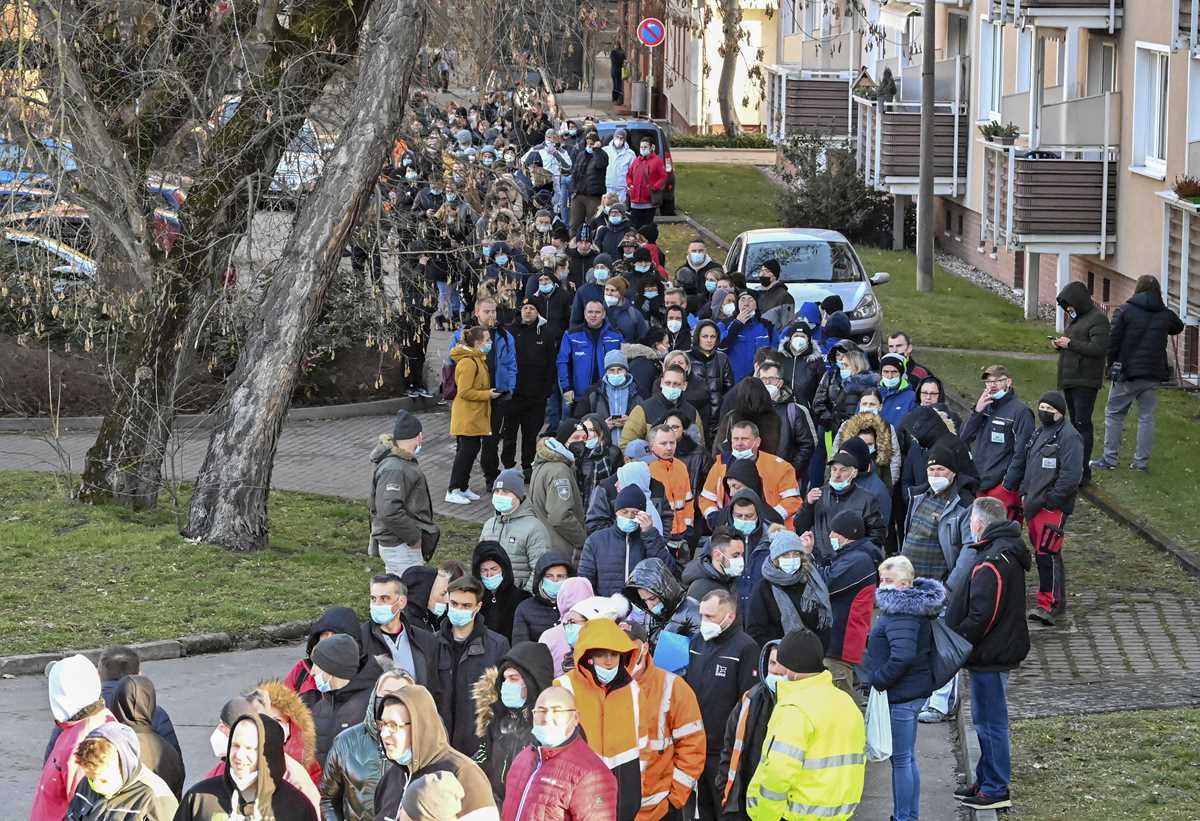 Polish commuters stand in a line and wait for a coronavirus test at the Stadtbruecke border crossing between Germany and Poland in Frankfurt an der Oder, Germany, Monday, March, 22, 2021. Poland is being classified as a ‘high risk’ COVID-19 area by German authorities and people anyone crossing into Germany from Poland must provide a negative coronavirus test. (Patrick Pleul/dpa via AP) 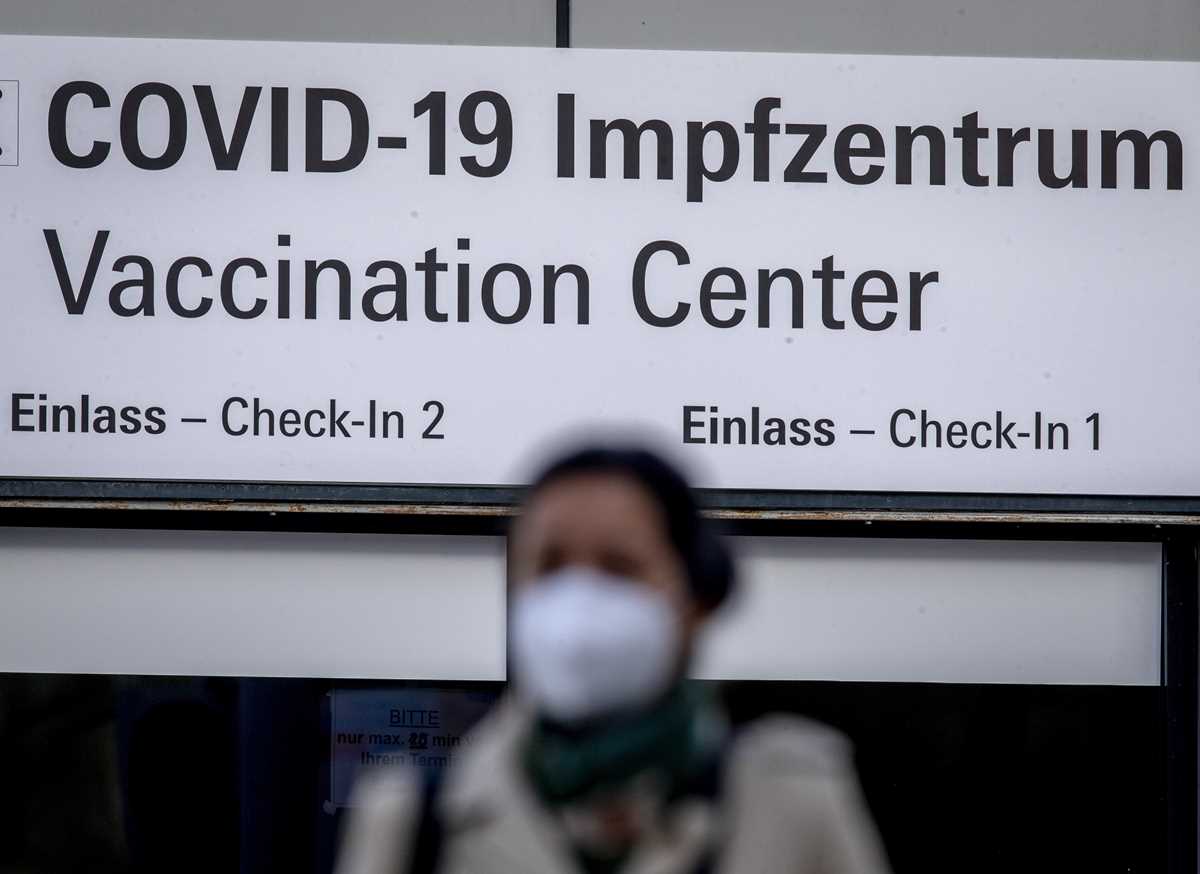 In this Thursday, Feb. 25, 2021 file photo, a woman walks past the entrance of the vaccination center in Frankfurt, Germany. Europe recorded 1 million new COVID-19 cases last week, an increase of 9% from the previous week and ending a six-week decline, WHO said Thursday, March 4, 2021. The so-called UK variant is of greatest concern in the 53 countries monitored by WHO in Europe. (AP Photo/Michael Probst, File) 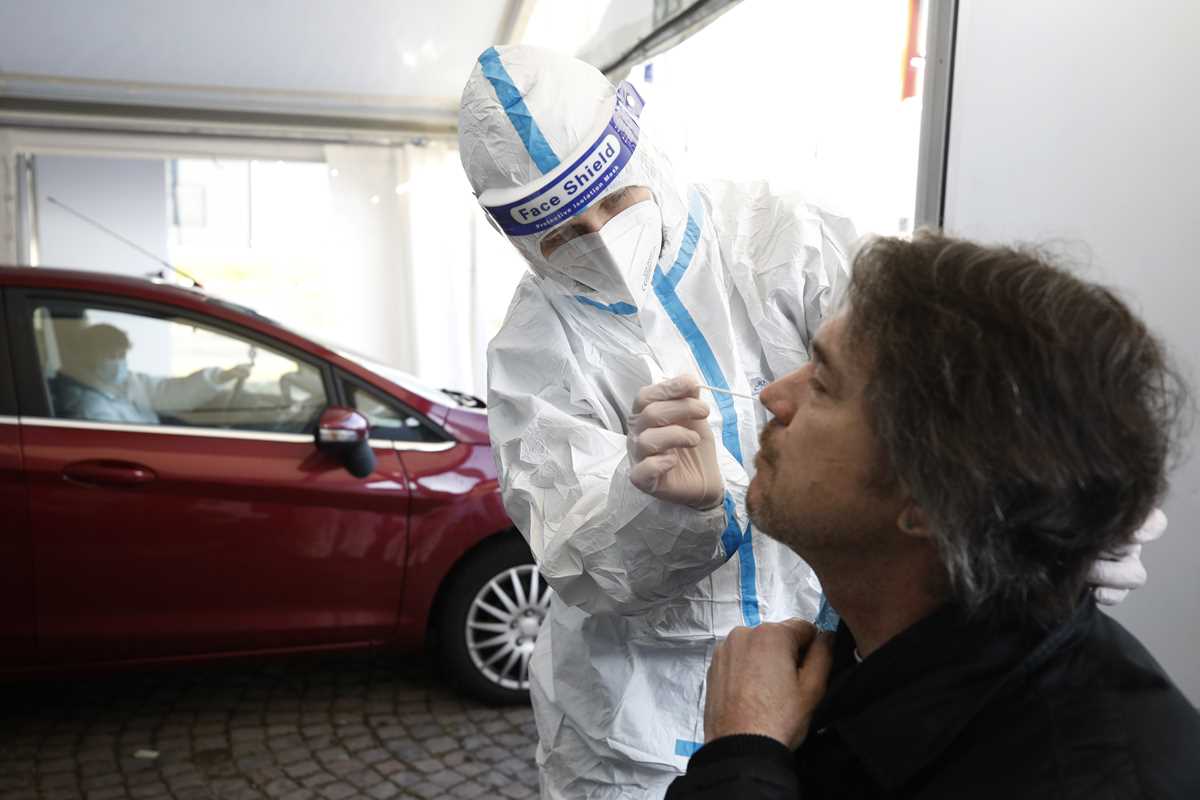 In this Tuesday, March 2, 2021 file photo, a German help worker tests for COVID-19 a French national going to Germany at the German-French border near Saarbrucken. Europe recorded 1 million new COVID-19 cases last week, an increase of 9% from the previous week and ending a six-week decline, WHO said Thursday, March 4, 2021. The so-called UK variant is of greatest concern in the 53 countries monitored by WHO in Europe. (AP Photo/Jean-Francois Badias, File) 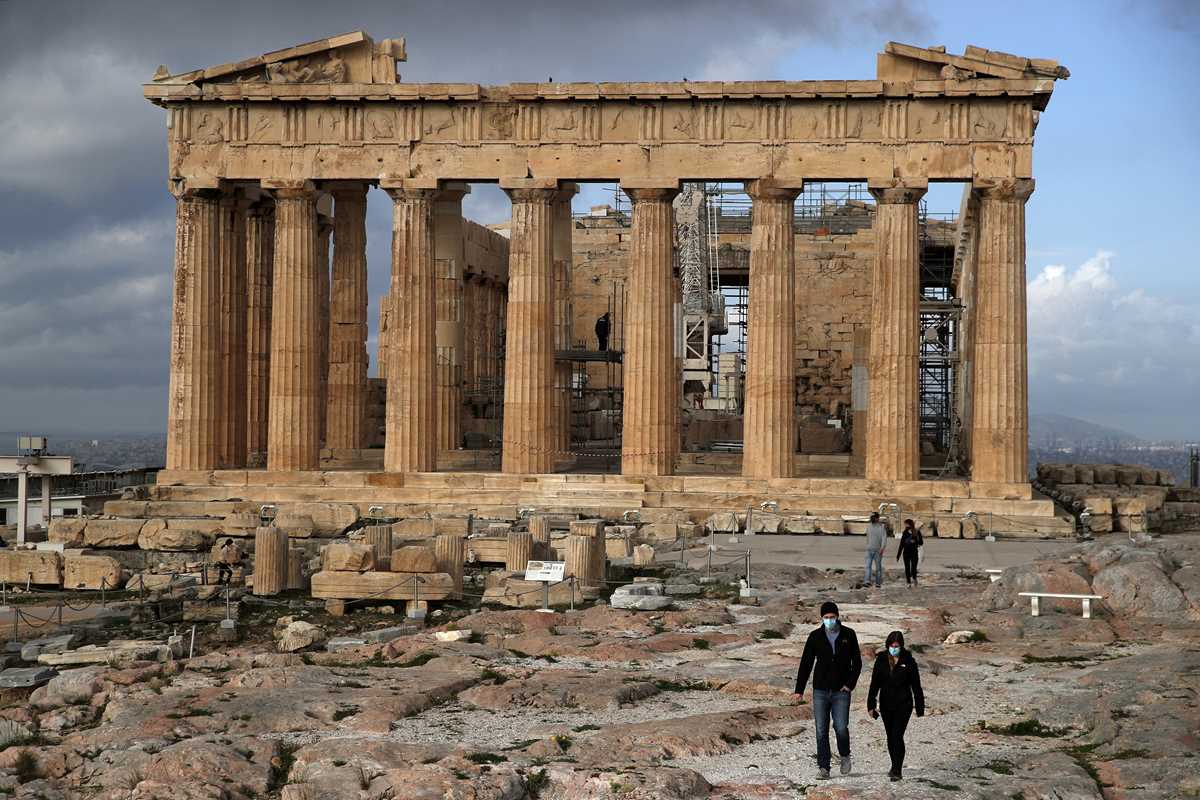 The first visitors wearing face masks to protect against the spread of coronavirus, walk atop of Acropolis hill, as the Parthenon temple is seen in the background in Athens, Monday, March 22, 2021. Greece’s government reopened the Acropolis and other ancient sites nationwide after four months as it prepares to restart the tourism season in mid-May. (AP Photo/Thanassis Stavrakis) 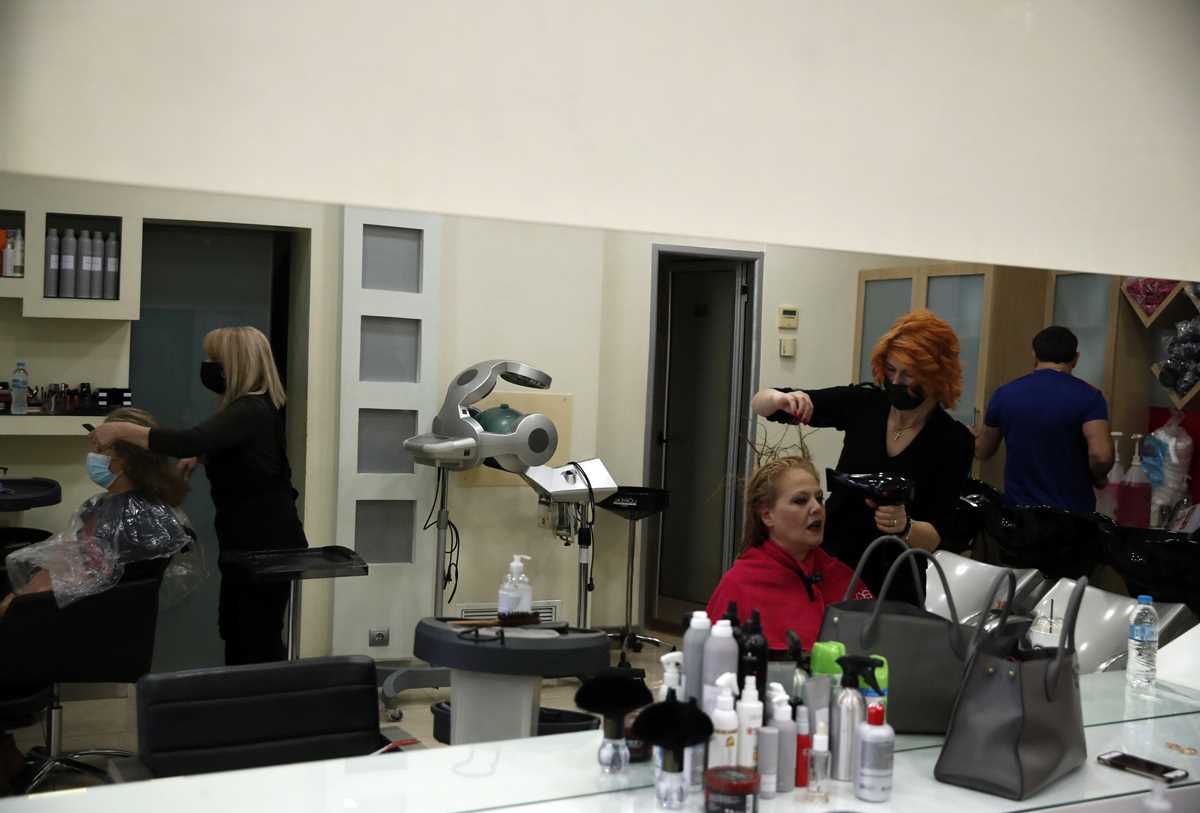 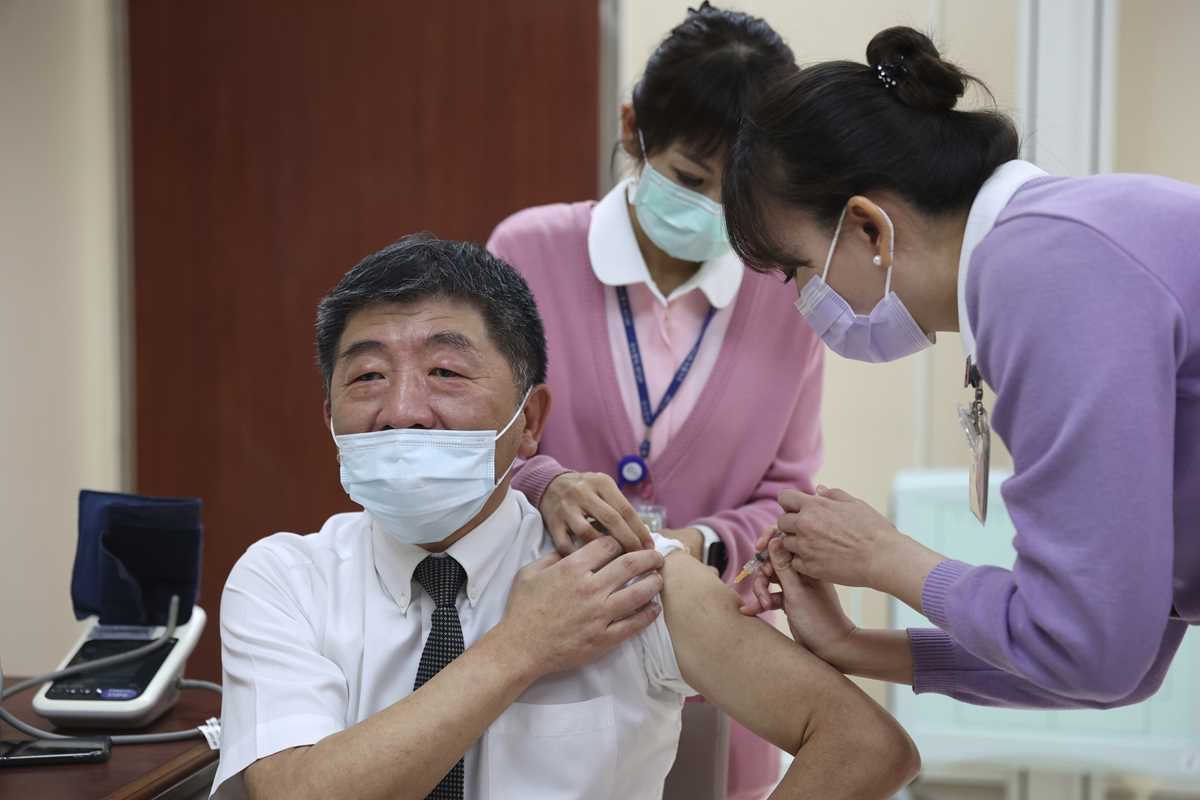 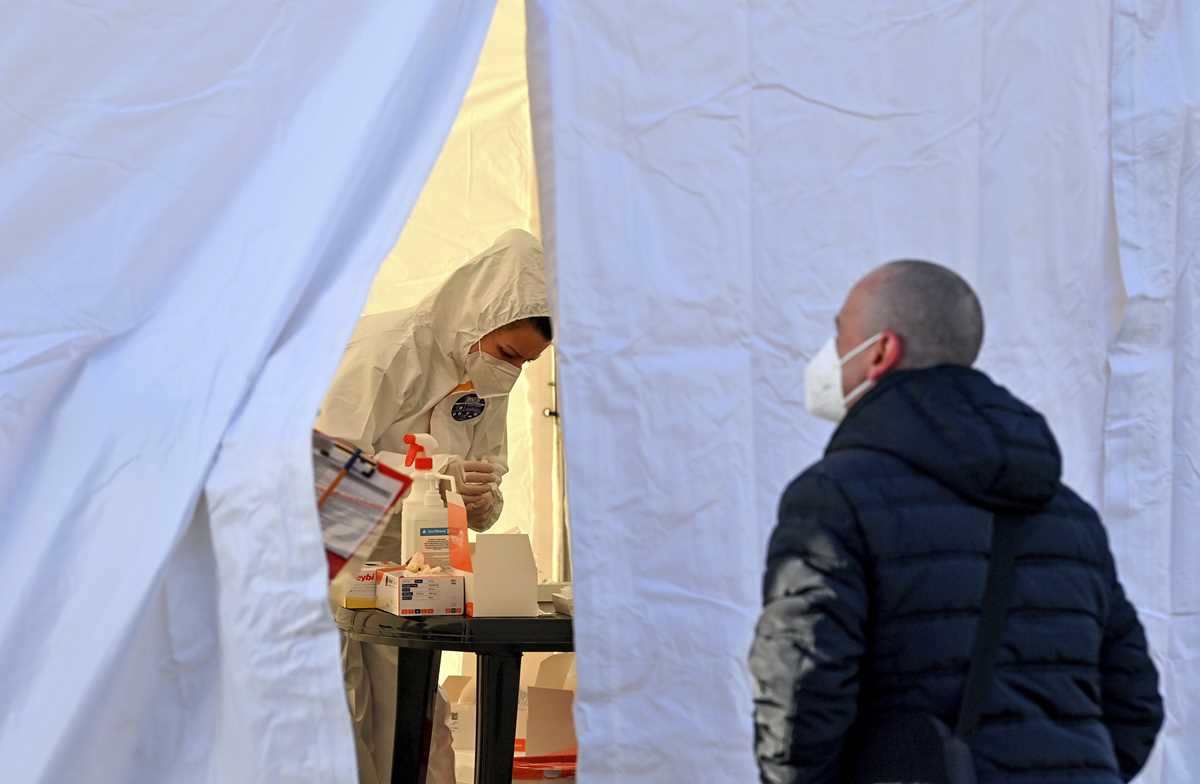 Polish commuters stands in front of a tent and waits for a coronavirus test at the Stadtbruecke border crossing between Germany and Poland in Frankfurt an der Oder, Germany, Monday, March, 22, 2021. Poland is being classified as a ‘high risk’ COVID-19 area by German authorities and people crossing into Germany from Poland must provide a negative coronavirus test. (Patrick Pleul/dpa via AP)

PRAGUE — Bells tolled across the Czech Republic at noon Monday to honor those who have died of COVID-19 in one of the hardest-hit European Union countries.

The death toll has reached almost 25,000 since the start of the pandemic in the nation of 10.7 million.

Coronavirus infections have been on the decline since the government imposed a tight lockdown earlier this month, but new cases and death rates still remain high.

Petr Pospichal, a former anti-Communist dissident who helped organize the remembrance, told Czech public radio that it was the right thing to do for people to observe a minute of silence wherever they were.

Pospichal says it’s also necessary to realize that the pandemic isn’t over yet and people are still dying.

The country has almost 1.5 million confirmed cases, and 24,810 deaths.

— AstraZeneca: US data shows vaccine effective for all ages

“I received a report that there are far more people willing to be vaccinated with AstraZeneca,” Prime Minister Mateusz Morawiecki said during a visit to a new temporary COVID-19 hospital in Radom. “This is very good news.”

Poland has been ramping up pandemic restrictions in recent weeks amid a dramatic spike in the number of new coronavirus infections.

Last week, many Poles canceled or didn’t show up for appointments to receive the AstraZeneca shot amid reports of rare blood clots. On Thursday, the European Medicines Agency said the vaccine doesn’t increase the overall incidence of blood clots, though it couldn’t rule out a link to a small number of rare clots.

This is the fourth manufacturing deal announced by Russia, and 700 million doses of the Russian vaccine will now be made in India.

India has been pledged 125 million doses of the vaccine by Russia.

LONDON — AstraZeneca’s COVID-19 vaccine provided strong protection against sickness and eliminated hospitalizations and deaths from the disease across all age groups in a late-stage study in the United States, the company announced Monday.

AstraZeneca said its experts did not identify any safety concerns related to the vaccine, including finding no increased risk of rare blood clots identified in Europe.

Although AstraZeneca’s vaccine has been authorized in more than 50 countries, it has not yet been given the green light in the U.S. — and has struggled to gain public trust amid a troubled rollout. The study comprised more than 30,000 volunteers, of whom two-thirds were given the vaccine while the rest got dummy shots.

BERLIN — Cross-border commuters have lined up at a newly opened testing station on the Polish-German border after Germany reacted to rising coronavirus infections in Poland by imposing new restrictions.

Germany declared Poland a “high-incidence area” starting Sunday, meaning that most people now need a negative test taken with the last 48 hours to enter and need to go into quarantine. Regular work commuters have to get tested twice a week.

Germany didn’t set up full border checks of the kind that have been place on its border with the two countries’ worse-hit neighbor, the Czech Republic, for weeks.

But the dpa news agency reported that there was a long line early Monday morning for a new testing station set up in Frankfurt an der Oder — one of three in Germany’s Brandenburg state. About 150 people waited in frosty temperatures to get tested.

VILNIUS, Lithuania — The president, prime minister and speaker of the parliament of the Baltic country all rolled up their sleeves Monday in a public move to boost general public’s trust in the AstraZeneca jab.

“I encourage our people not to linger any longer and get the jab with the vaccine of their preference” President Gitranas Nauseda told reporters Monday morning. He and Ingrida Simonyte and Viktorija Cmilyte Nielsen — respectively the prime minister and the speaker of the 141-member Seimas assembly — received the vaccine.

Lithuania has reported more than 209,000 cases and 3,476 deaths from COVID-19 since the start of pandemic in 2020. A massive vaccination campaign is planned to start later this spring.

ATHENS, Greece — Greece’s health minister is requisitioning the services of private sector doctors from certain specialties in the wider Athens region to help fight a renewed surge in coronavirus infections that is straining hospitals to their limits.

Vassilis Kikilias said Monday that despite repeated appeals to private sector doctors to volunteer to help in the public sector, very few came forward. Therefore, he said, he was ordering those from the specialties of pathology, pneumonology and general medicine to help.

The requisition order is for one month for 206 doctors, health authorities said.

Taiwan has on hand 117,000 doses of the AstraZeneca vaccine, which it is distributing to healthcare workers across 57 hospitals.

Taiwanese premier Su Tseng-chang launched the drive by receiving the first shot at National Taiwan University Hospital in the capital Taipei. “After 30 minutes of rest, there’s no signs of any discomfort,” he said.

The rest period is for monitoring recipients for any adverse reactions.

Fortunately, Wall Street’s brightest minds have already done this for us. Every year, analysts issue approximately 3,000 distinct recommendations for healthcare companies. Analysts don’t always get their “buy” ratings right, but it’s worth taking a hard look when several analysts from different brokerages and research firms are giving “strong-buy” and “buy” ratings to the same healthcare stock.

This slide show lists the 15 healthcare companies with the highest average analyst recommendations from Wall Street’s equities research analysts over the last 12 months.

The Latest: Las Vegas strip clubs given OK to reopen May 1

PGS Completes Data Imaging of the Kwanza Shelf and Releases