Last Chance for Animals applauds the Ontario Society for the Prevention of Cruelty to Animals (OSPCA) and Crown Attorney for pursuing justice against Millbank Fur Farm. “Although this doesn’t stop the suffering that the minks were forced to endure, it sends a clear message to the fur industry: the systemic animal abuse that runs rampant throughout the industry is unacceptable and will not be tolerated by a civilized society,” said Chris DeRose, Founder and President of Last Chance for Animals. “There is no excuse to kill animals for the sake of fashion, and LCA will not stop until this horrific industry is shut down for good.”

The legal proceedings were held in the Provincial Court in Guelph, Ontario, but had been significantly delayed due to the pandemic. LCA has confirmed that Millbank Fur Farm has also made a number of improvements at the farm that were confirmed by Provincial Animal Welfare Services.

This development is an important reminder of the importance of whistleblowers and transparency in animal agriculture. This investigation is the exact kind of thing that the recently passed Security from Trespass and Protecting Food Safety Act will make more difficult. Whistleblowers play a critical role in shining a light on the conditions in animal agriculture. LCA believes whistleblowers should be applauded, not punished for documenting the truth and bringing animal abuse to the attention of the public. LCA further calls on the Ford government to repeal the Security from Trespass and Protecting Food Safety Act immediately.

Although Last Chance for Animals is an abolitionist organization that would like to see the fur industry ended, recognizing the suffering of animals abused for fur and setting legal precedents are a step in the right direction towards creating a more compassionate society.

ABOUT LAST CHANCE FOR ANIMALS: LCA is an international non-profit organization dedicated to eliminating animal exploitation through education, investigations, legislation, and public awareness campaigns. Since its formation in 1984, LCA has succeeded as one of the nation’s pioneer animal advocacy groups. LCA’s educational and public outreach programs have empowered global citizens to make positive changes for animals. For more information, visit https://www.lcanimal.org/.

Photos accompanying this announcement are available at 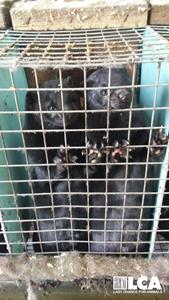 Everyday Life on a Mink Farm

The Extent of Animal Suffering 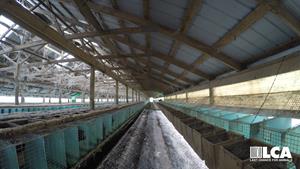 Hundreds of Mink were caged in cruel and inhumane conditions

PGS Completes Data Imaging of the Kwanza Shelf and Releases