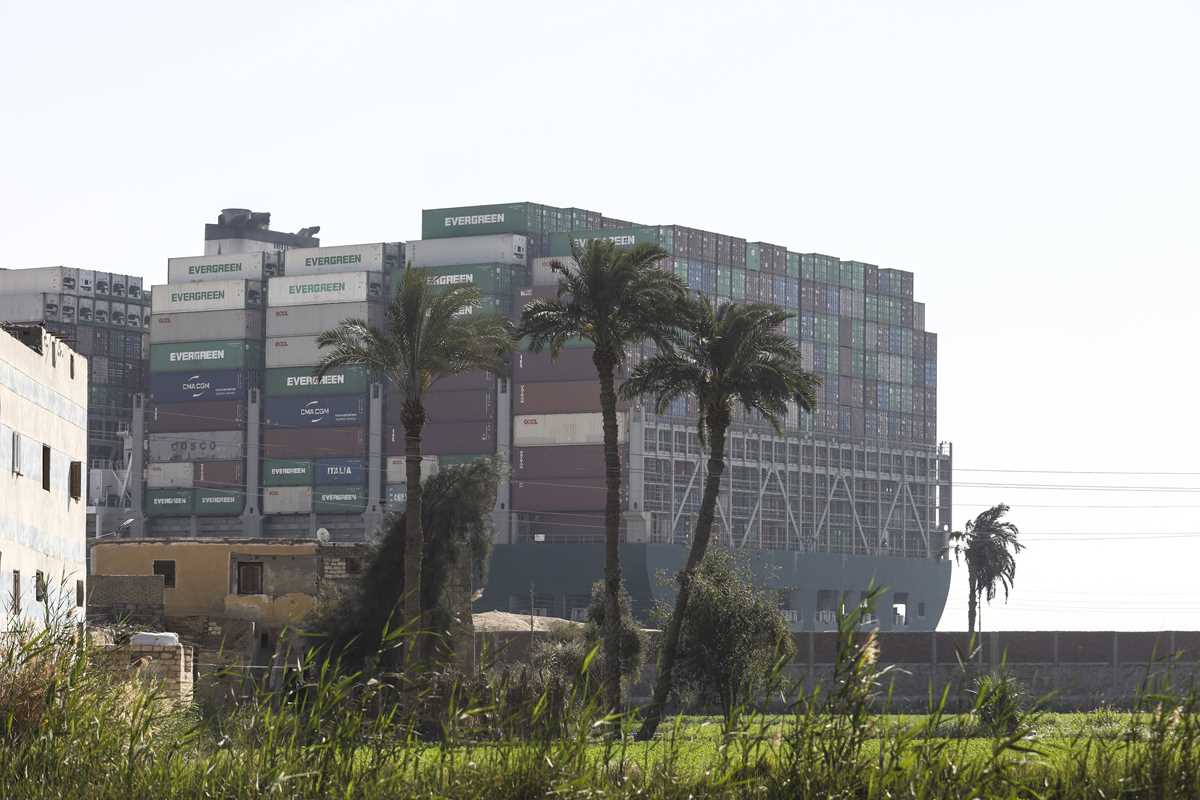 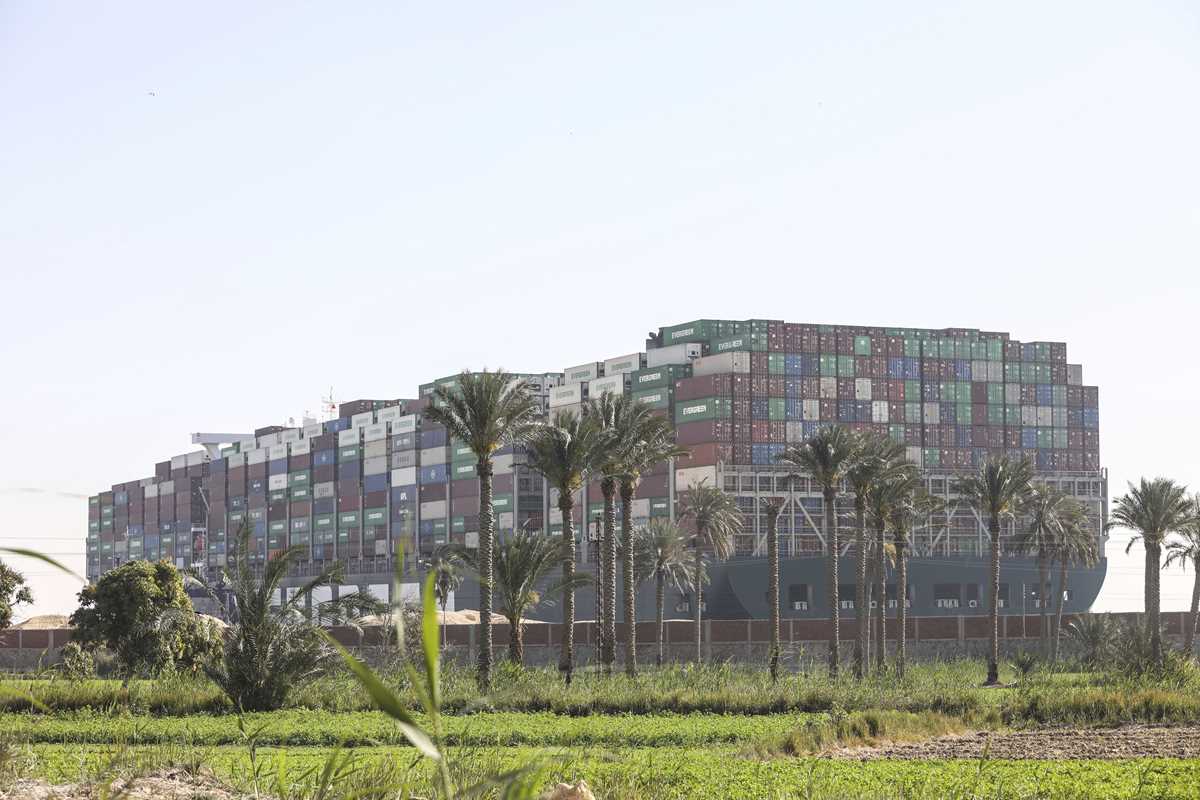 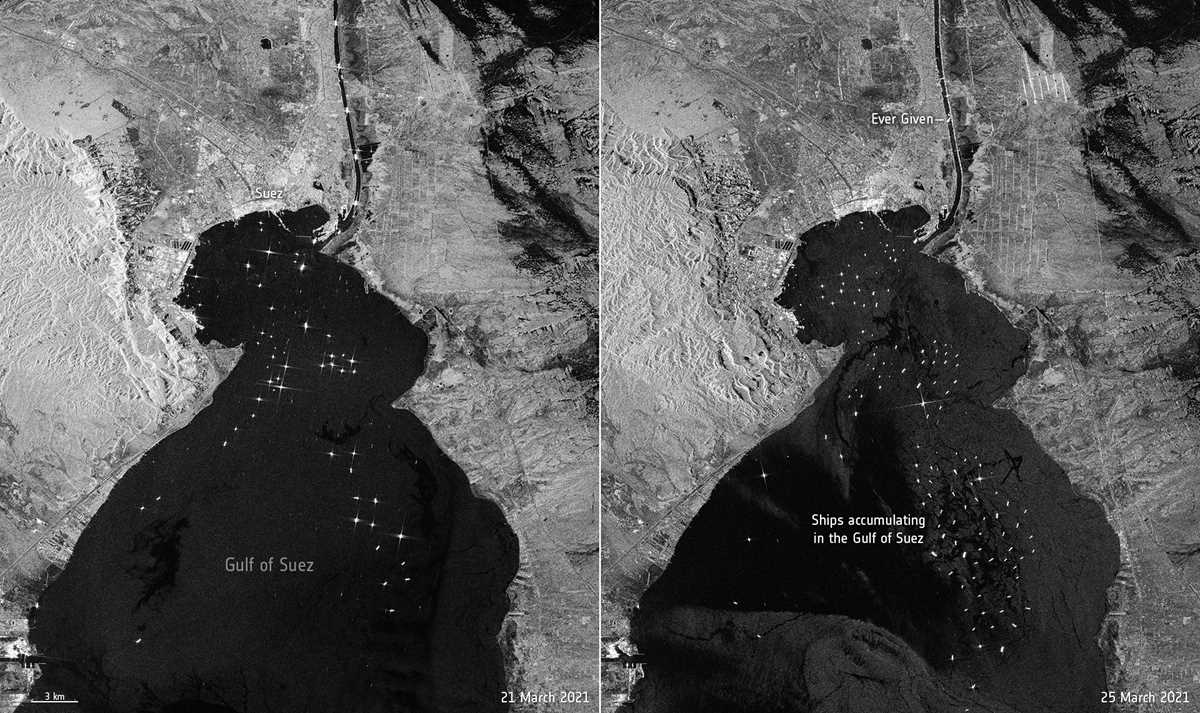 This satellite image provided by The European Space Agency on Friday, March 26, 2021, shows on the left, routine maritime traffic in the Suez Canal with vessels on March 21, 2021 and on the right, maritime traffic backed up on the canal on March 25. A maritime traffic jam grew to more than 200 vessels outside the Suez Canal and others began changing course as dredgers worked frantically to free a giant container ship that has been stuck sideways in the waterway and disrupted global shipping. (ESA via AP)

The Ever Given, a Panama-flagged ship that carries cargo between Asia and Europe, ran aground Tuesday in the narrow canal that runs between Africa and the Sinai Peninsula.

The massive vessel got stuck in a single-lane stretch of the canal, about six kilometers (3.7 miles) north of the southern entrance, near the city of Suez.

Peter Berdowski, CEO of Boskalis, the salvage firm hired to extract the Ever Given, said the company hoped to pull the container ship free within days using a combination of heavy tugboats, dredging and high tides.

He told the Dutch current affairs show Nieuwsuur on Friday night that the front of the ship is stuck in sandy clay, but the rear “has not been completely pushed into the clay and that is positive because you can use the rear end to pull it free.”

Berdowski said two large tugboats were on their way to the canal and are expected to arrive over the weekend. He said the company aims to harness the power of the tugs, dredging and tides, which he said are expected to be up to 50 centimeters (20 inches) higher Saturday.

“The combination of the (tug) boats we will have there, more ground dredged away and the high tide, we hope that will be enough to get the ship free somewhere early next week,” he said.

If that doesn’t work, the company will remove hundreds of containers from the front of the ship to lighten it, effectively lifting the ship to make it easier to pull free, Berdowski said.

A crane was already on its way that can lift the containers off the ship, he said.

An official at the Suez Canal Authority said the authority planned to make at least two attempts Saturday to free the vessel when the high tide goes down. The official spoke on condition of anonymity because he was not authorized to brief journalists.

Egyptian authorities have prohibited media access to the site. The canal authority said its head, Lt. Gen. Osama Rabei, would hold a news conference Saturday in the city of Suez, a few kilometers (miles) from the site of the vessel.

Yukito Higaki, president of Shoei Kisen, the company that owns the giant container ship, told a news conference in Imabari, Japan on Friday night that 10 tugboats were deployed and workers were dredging the banks and sea floor near the vessel’s bow to try to get it afloat again.

Shoei Kisen said Saturday the company was considering removing containers to lighten the vessel if refloating efforts fail, but that would be a difficult operation.

The White House said it has offered to help Egypt reopen the canal. “We have equipment and capacity that most countries don’t have and we’re seeing what we can do and what help we can be,” President Joe Biden told reporters Friday.

An initial investigation showed the vessel ran aground due to strong winds and ruled out mechanical or engine failure, the company and the canal authority said. GAC, a global shipping and logistics company, had previously said the ship had experienced a power blackout, but it did not elaborate.

A maritime traffic jam grew to around 280 vessels near Port Said on the Mediterranean Sea, Port Suez on the Red Sea and in the canal system on Egypt’s Great Bitter Lake, according to canal service provider Leth Agencies.

Some vessels began changing course and dozens of ships were still en route to the waterway, according to the data firm Refinitiv.

A prolonged closure of the crucial waterway would cause delays in the global shipment chain. Some 19,000 vessels passed through the canal last year, according to official figures. About 10% of world trade flows through the canal, which is particularly crucial for transporting oil. The closure could affect oil and gas shipments to Europe from the Middle East.

It remained unclear how long the blockage would last. Even after reopening the canal that links factories in Asia to consumers in Europe, the waiting containers are likely to arrive at busy ports, forcing them to face additional delays before offloading.

Apparently anticipating long delays, the owners of the stuck vessel diverted a sister ship, the Ever Greet, on a course around Africa instead, according to satellite data.

Others also are being diverted. The liquid natural gas carrier Pan Americas changed course in the mid-Atlantic, now aiming south to go around the southern tip of Africa, according to satellite data from MarineTraffic.com.

Geron Corporation (Nasdaq: GERN) today reported that it has granted

Should I buy Tesla shares after an analyst from Morgan Stanley raised its price target to $900?

Tesla’s (NASDAQ: TSLA) shares have advanced more than 12% in

GBPCHF Down 19 Pips On Hourly Chart, in an Uptrend Over Past 90 Days; Doji and Pin Bar Patterns Appearing on Chart