In this Tuesday, Feb. 9, 2021, file photo, Michael Foster of the Retail, Wholesale and Department Store Union holds a sign outside an Amazon facility where labor is trying to organize workers in Bessemer, Ala. When Amazon found out that workers were trying to form a union, a worker said Wednesday, March 17, that the company put up signs across the warehouse in Bessemer, Ala., including in bathroom stalls. (AP Photo/Jay Reeves, File) 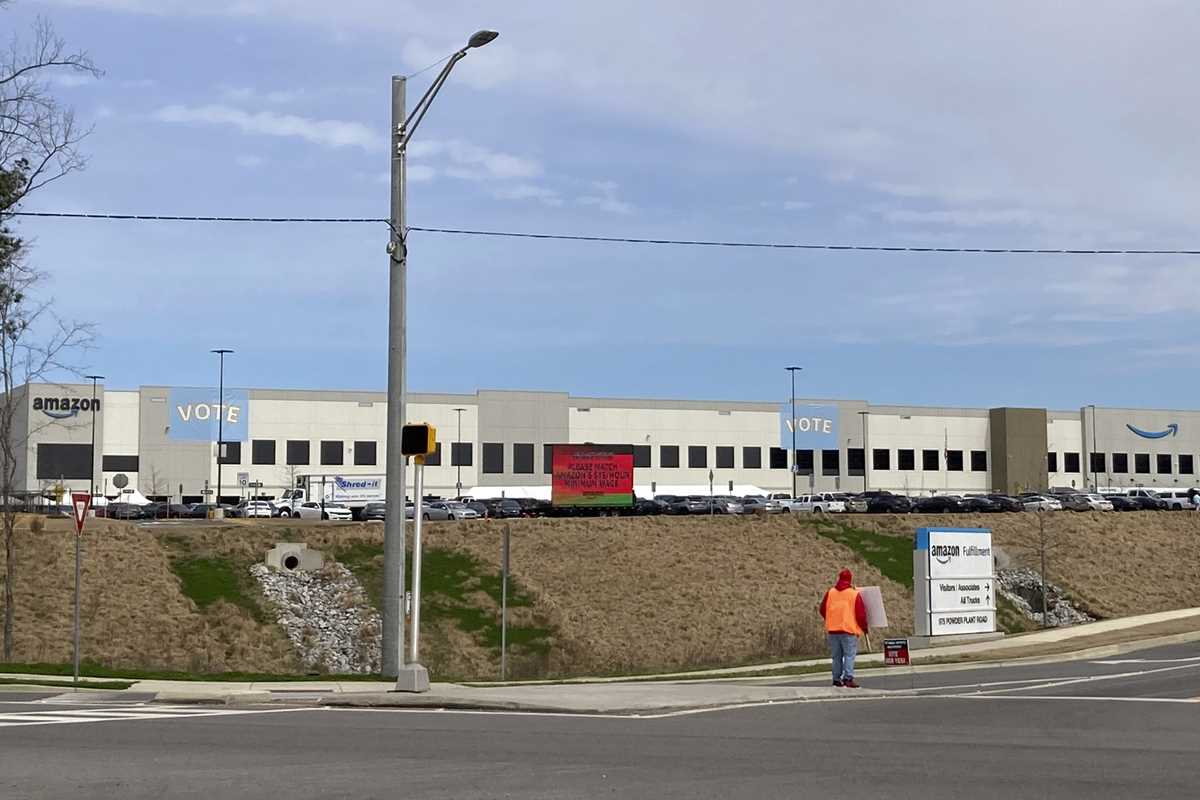 In this March 5, 2021, file photo, an Amazon distribution center in Bessemer, Ala., is the center of a potentially groundbreaking unionization effort. When Amazon found out that workers were trying to form a union, a worker said Wednesday, March 17, 2021, that the company put up signs across the warehouse in Bessemer, Ala., including in bathroom stalls. (AP Photo/Bill Barrow, File) 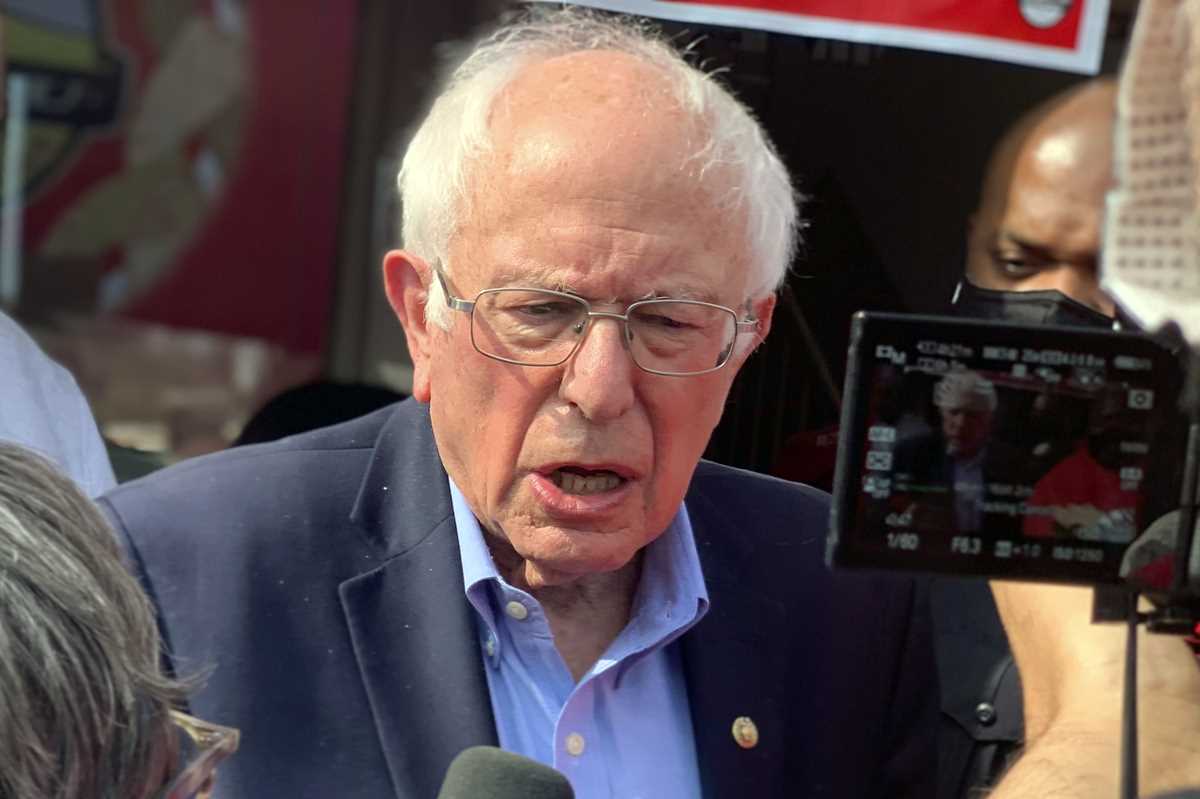 U.S. Sen Bernie Sanders, I-Vt., speaks at a rally, Friday, March 26, 2021, in Birmingham, Ala., ahead of a union vote at an Amazon warehouse in the state. Sanders said a labor victory at the tech and retail giant would resonate around the country. (AP Photo/Kim Chandler)

BESSEMER, Ala. (AP) — Linda Burns was excited at first to land a job at the Amazon warehouse outside Birmingham, Alabama. The former nursing assistant had always enjoyed ordering from the company, Now, she would be working for them.

A cog in a fast-moving assembly line, her job involved picking up customers’ orders and sending them down the line to the packers. Now she is a staunch supporter of getting a union at the Bessemer facility. She said employees face relentless quotas and deserve more respect.

“They are treating us like robots rather than humans,” said Burns, 51, who said she is out of leave after developing tendonitis.

This week, Amazon workers and union advocates, including Vermont Sen. Bernie Sanders, made a last-minute push as voting comes to a close in the high-stakes union battle. If organizers are successful, it could lead to a chain reaction of other unionization pushes at Amazon facilities. If voted down, it would be another loss for organizers hoping to win a rare labor victory in the Deep South.

Amazon is fighting the union. The company argues the warehouse created thousands of jobs with an average pay of $15.30 per hour — more than twice the minimum wage in Alabama. Workers also get benefits including health care, vision and dental insurance without paying union dues, the company said.

Sanders spoke at a union rally in Birmingham on Friday, saying a labor victory against the tech and retail giant owned by the richest person in world — and in a historically anti-union state — would resonate across the country.

“This country belongs to all of us, not just a handful of billionaires,” the former Democratic presidential candidate said.

Ahead of Sanders’ visit, Amazon CEO Dave Clark tweeted that they “actually deliver” a progressive workplace with a $15 hourly minimum wage and good health benefits that Sanders said he supports.

Burns and Harvey Wilson, a 41-year-old who works as a “picker” at Amazon, both said they’re supporting the union because of poor working conditions at the warehouse. Employees face relentless quotas and the mammoth size of the facility makes it nearly impossible to get to the bathroom and back to your station during a workers’ break time, they said.

“How could you work for somebody who is trillion, billion whatever you want to call it, how can you work for them and they don’t want you to go to the bathroom?” Burns said.

Wilson said he is unsure how the vote would go because a number of younger workers are fearful they could lose benefits.

“A lot of people are scared to vote because they are afraid they are going to lose their jobs,” Wilson said.

Employees are seeking to be represented by the Retail, Wholesale and Department Store Union. Ballots on the vote must be returned by Monday.

The vote in Alabama comes after efforts to start unions at Southern auto plants came up short.

Emmit Ashford, a part-time Amazon worker, said that even if the vote fails, he believes the workers in Bessemer have ignited something.

“No matter what happens with this vote, the bell has been rung and it won’t stop here. We will not stop fighting,” Ashford said at a rally ahead of the vote.

As you know, a single upgrade from a broker probably won’t be a major game-changer for any single stock. But, what if there was a stock that had been upgraded by more than 10 different brokers during the last 90 days?

If ten different brokers have all upgraded a stock within the last few months and the price hasn’t skyrocketed (at least, not yet), you would want to take a pretty hard look at it.

It turns out that there are actually 20 different companies that have been upgraded or had their price target increased at least ten times during the last ninety days by more than 10 different brokers. This slideshow lists those companies.

© Reuters. FILE PHOTO: Smoke rises from a factory during

Almost a decade ago, Flagship Pioneering, a VC fund run

A currency trader watches monitors at the foreign exchange dealing