Exxon Vs. NextEra Energy: The Real King Of Energy

2020 has been full of surprises and recently NextEra Energy Inc. (NEE) passed Exxon Mobil Corporation (XOM) as the most valuable energy company by market cap in the United States. At the close of the market on 10/13/20 XOM finished the day at $34.23 with a market cap of $146.42 billion and NEE trades at $301.47 with a market cap of $149.67 billion. There is no question that over the past five years NEE has been a more lucrative investment. Over a five-year period NEE has returned 201.30% while XOM has lost 56.33%. In just the past year NEE has climbed 33.17% while XOM declined 49.8%. For the readers who are thinking what about XOM’s dividend the answer may be shocking. If you had invested $10,000 on 10/13/15 in both XOM and NEE over the past five years your position in XOM would have generated a -45.37% return with a value of $5,464.05 while your investment in NEE would have appreciated to $34,423.32 resulting in a 244.21% return. If you read my articles its well know that I feel energy companies are undervalued but the proof is in the numbers. As far as market cap and return on investment NEE is the clear winner but is it really the king of energy or has its share price appreciated to quickly? I am going to examine both companies to determine who in my opinion is really the king of energy and where I would invest new capital today.

Exxon Mobil Vs. NextEra by the numbers

I am going to discuss two sets of numbers between XOM and NEE. I will examine both companies based on the 2019 full year and the first six months of 2020. Starting with the latest full year results from 2019 NEE generated $19.20 billion in revenue, their operating expenses came in at $13.85 billion, operating income was $5.35 billion and net income was $3.39 billion. NEE finished 2019 with $7.41 billion in total current assets, $600 million cash on the books and $117.7 billion in total assets. NEE’s total liabilities totaled $76.33 billion and the total equity in the company was $41.36 billion. 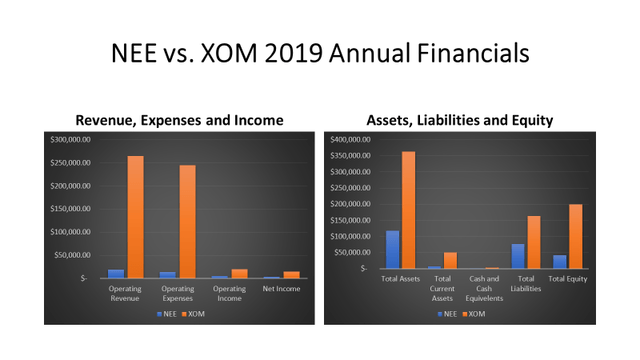 The challenges 2020 has presented have changed many business landscapes and the energy sector has been one of the hardest hit. For the first six months of 2020 NEE generated $9.04 billion in revenue and its operating expenses came in at $6.16 billion. Ove this period NEE generated $2.88 billion in operating income and $1.94 billion in net income. NEE’s total assets increased to $121.96 billion, cash and cash equivalents grew to $1.01 billion while liabilities expanded to $80.39 billion leaving a small increase in equity at $41.57 billion. Overall 2020 hasn’t impacted NEE from a financial perspective as it generated 57.35% of its total 2019 net income in the first half of 2020. NEE is in a position where they could see a net positive increase year over year in net income for 2020. 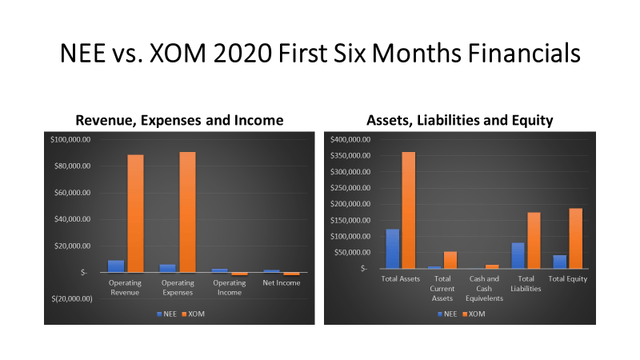 From the comparison of both NEE and XOM’s 2019 annual reports and the 2020 Q2 reports there is no question that XOM is a larger company. At the end of the first half of 2020 XOM generated an additional $79.72 billion in revenue, its assets were larger by $239.53 billion and the equity in the company was 350% larger with a difference of $145.58 billion. The big difference is that NEE made a substantial profit of $1.94 billion in net income while XOM lost $1.94 billion in net income. Sometimes larger isn’t always better and there is a big difference between loosing and making money regardless of how larger your assets and equity in the company are. If both companies were to close down tomorrow there would be an additional $145.58 billion in equity for the shareholders of XOM but that 100% not happening so it won’t be factored into my opinion.

Now that we have compared the financial metrics where is the growth?

There are many readers on Seeking Alpha who follow energy companies and the energy sector is frequently written about. Everyone has different investment goals but in the end everyone invests to generate a profit. So when it comes to energy where is the growth? Before you read any further keep in mind I am a shareholder of multiple traditional energy companies and believe they are undervalued but with investing I try to be as unbiased as possible. While I see growth left in natural gas and maybe oil for a short period of time after the COVID-19 hurdle I believe that most of the growth will come from renewables.

The global population has surpassed 7.81 billion and is still projected to reach 10 billion in the year 2057. The one thing that can’t be refuted is that an additional 2.19 billion people added to the global population over the next 37 years will increase the amount of energy utilized on a global scale. Its simple logic as each person consumes energy the more people we have on earth, the more energy that will be needed. Another key metric to consider is electrification and how moving from poverty to the middle class effects energy demand. As humans increase their economic status and move out of poverty to the middle class they consume more energy. The Brookings Institution projected that over the next decade the middle class will expand from 3.2 billion people to 4.9 billion people. By 2030 1.7 billion people on a global scale will increase their standard of living and join the middle class. Just using simple logic when 1.7 billion increase their standard of living the global energy demand will need to grow to sustain increased rates of utilization.

From a domestic picture we are seeing tremendous growth in decarbonization and net zero pledges from corporations. The number of net zero pledges has doubled in less than one year to more than 1,500 companies that generate over $11.4 trillion in revenue. For example AT&T (T) pledged to make its company carbon neutral by 2035, Walmart (WMT) is aiming to achieve net zero admissions by 2040, Apple (AAPL) has committed to be 100% carbon neutral for its supply chain and products by 2030 while committing to bring its carbos footprint to net zero over the next 20 years. Amazon (AMZN) has also pledged to bring its company to net zero emissions by 2040 and utilize 100% renewable energy by 2030. AMZN is projecting it will have 10,000 electric vehicles on the road by 2022 and 100,000 by 2030. To put it simply change is inevitable and reducing the carbon footprint has transcended individuals to corporate objectives. 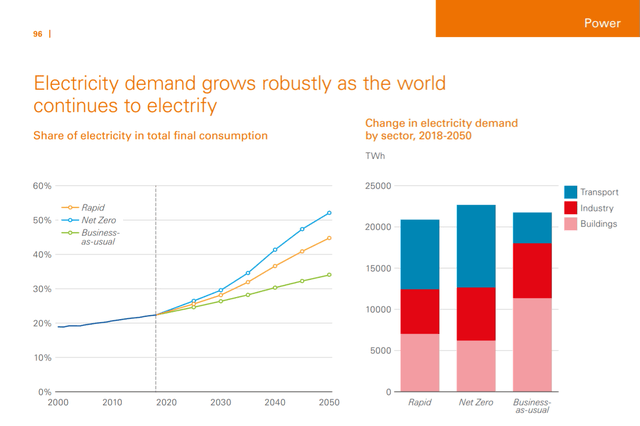 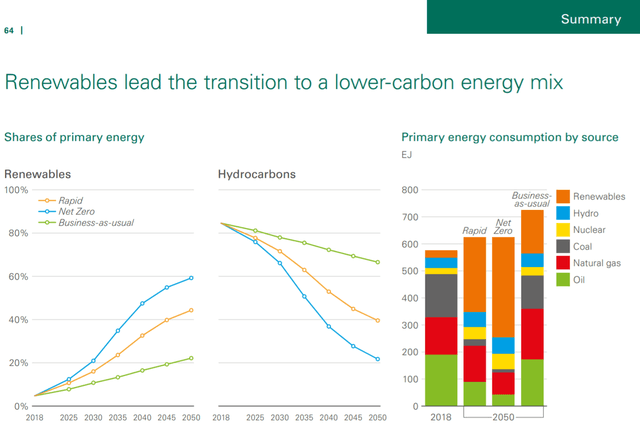 Living in the realm of reality with valuations

I believe many companies are living within what I like to call market euphoria. I believe NEE is one of these companies except for the fact it actually generates billions in net income. As of 6/31/20 NEE generated just over $9 billion in revenue and $1.94 billion in net income. Its assets totaled $121.96 billion and the total equity in the company was $41.57 billion. If NEE hypothetically generated $20 billion in revenue for 2020 it would be valued at 7.48X revenue and if the total equity stays at its current level it would trade at 3.6X total equity. Q2 of 2020 was definitely an anomaly for some companies and since XOM generated $88.76 billion for the first six months of the year let’s give the second half a boost since the country has had less restrictions. If XOM generates $180 billion in revenue for 2020 its market cap wouldn’t even trade at 1X its revenue. Based on XOM’s current equity its stock is trading at a 28% discount to the equity in the company. There is currently zero premium on XOM’s assets.

Yes XOM and NEE are in the same sector but are vastly different in business segments but the numbers are the numbers. When I step back and look at these companies based off the numbers and factor in that Q2 of 2020 will go down as one of the worst business environments in history XOM looks cheap and NEE looks expensive based on the valuation. For the first half of 2020 XOM generated an additional $79.72 billion in revenue, had $239.53 billion more in total assets and $145.58 billion in additional equity. Personally I would have a hard time paying the current valuation for NEE not because it isn’t a valuable company, not because there isn’t a growth story but the current premium it has been given is simply too rich for my blood.

In my opinion XOM is the king of energy and NEE is the prince of energy. I believe at today’s valuations XOM is undervalued and NEE is overvalued. I think XOM is more of a catch-up trade and an interesting name for dividend income but the growth story is uncertain. Unless XOM seriously changes its business model and invests heavily in renewables I feel it will face increasingly more challenges in the future. Once a vaccine or cure is available for COVID and the world gets back to business I think XOM can get back to $60 but the days of $70 and $80 could be behind them. NEE is an interesting company in an explosive sector. I think NEE is more the prince of energy because it has tremendous potential for growth over the next thirty years. I feel NEE needs to grow into its valuation and have a substantial pullback in the short term but with the projections for renewables from now until 2050 there is no question in my mind they will continuously increase revenue, net income, total assets and shareholder equity. While I think NEE is too expensive today looking back on today’s price in five to ten years it will probably seem cheap and may be worth establishing a position and adding to it on pullbacks. Renewables is going to be a huge part of the energy mix in the future and NEE has built a conglomerate to capitalize on the future energy trends.

Disclosure: I am/we are long BP, AAPL, AMZN, T. I wrote this article myself, and it expresses my own opinions. I am not receiving compensation for it (other than from Seeking Alpha). I have no business relationship with any company whose stock is mentioned in this article.

Additional disclosure: I have to list companies I own in the I am/we are long section if I mention them in the article. I think NEE has a very bright future as its long-term growth potential is enormous while I think there is money to be made on XOM over the short term but with how much the world is changing the chances of reaching previous highs are not likely

Additional disclosure: Disclaimer: I am not an investment advisor or professional. This article is my own personal opinion and is not meant to be a recommendation of the purchase or sale of stock. Investors should conduct their own research before investing to see if the companies discussed in this article fits into their portfolio parameters.

ASML Holding: A 'Picks And Shovels' Play In A Crucial Industry

Germany stocks lower at close of trade; DAX down 0.92%

GBPAUD Down 57 Pips Over Past Hour, in an Uptrend Over Past 30 Days; Price Base in Formation Over Past 90 Days