Midstream and MLPs looked to be coasting to a third straight week of solid gains, but a sharp selloff across energy stocks Friday erased the gains for the week. There was little volatility in the market generally this week. In the summary dashboard below, only natural gas prices moved more than 1% vs. last week. In the absence of material catalysts, the market is in a holding pattern ahead of the election.

Earnings season for midstream kicks off this week with KMI on Wednesday. Expect earnings to bring some catalysts for individual stocks, including opportunities for management teams to discuss fundamental outlooks, free cash flow plans, cost-cutting initiatives, and capital allocation. Even with that opportunity, midstream and the energy market overall has the election and tax loss-selling looming in the next few months, so it will be interesting to see how much impact earnings will have.

There seems to be a pause in the ongoing fund outflows from midstream fund products. That reprieve in selling pressure, combined with the lack of volatility and news this week, affords me a chance to call back to old posts to help explain fund flow dynamics at play in midstream.

Based on Wells Fargo data, in just the last 21 months through 9/30/20, there have been $6.2bn of total net outflows from midstream ETFs and open-end mutual funds, $8.5bn from February 2018. This is in addition to more than $3bn of institutional outflows from reported mandate terminations. The overall amount of institutional “money-in-motion” out of midstream is much larger when considering those that do not report publicly. This money is moving into listed infrastructure, listed real assets, broader equity mandates, and into private equity. 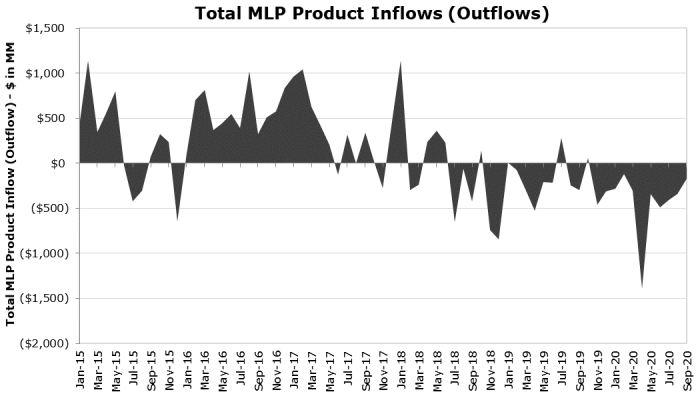 The reasons for the outflows are many, and they’ve been discussed at length here at MLPguy for years now. To summarize:

This multi-year unwind is ongoing. But there are times when the pressure abates, often coinciding with renewed optimism in January or the ramp into third quarter distribution payments in October. There will eventually be a time when fund outflows run their course, and the unwind is complete. There will be large opportunities in the surviving midstream players.

Midstream companies have been challenged by the above dynamic and weak commodity prices, which makes their efforts to change their excessive spending and leverage situations. The path thus far has been to reduce dividends, reduce costs and reduce capital outlays. While top-line growth will remain challenged, free cash flow visibility is growing.

MLPs were very mixed this week, with a few winners up around 3%, including PAA seeing some relief at the top. NGL had an unfavorable contract ruling that impacted its stock late in the week. ET was at the top of the group at the start of Friday, but dropped out of the top 5 with a brutal last few hours of trading Friday. 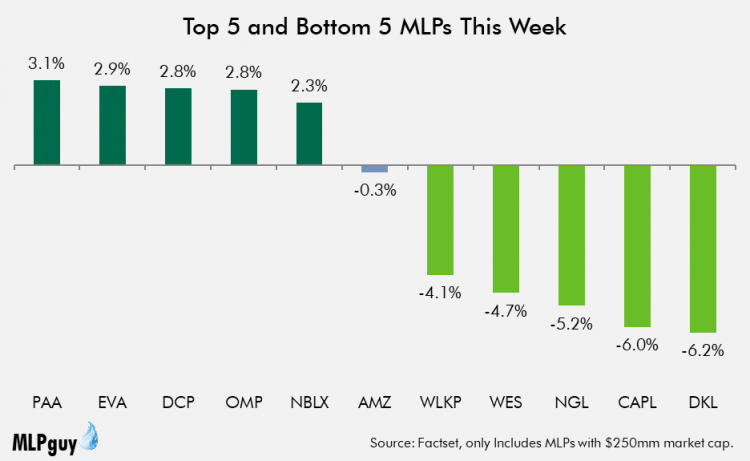 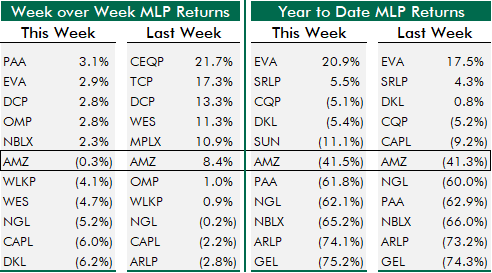 AM way out in front this week, its dividend yield is 19% even after this move, so probably some seasonal dividend capture trading going on with it. HESM was upgraded late in the week, which reminded the market of the consistency that HESM has shown and is likely to continue to show. LNG had a strong week as well, outperforming other larger midstream corporations. ETRN was an outlier on the downside, especially in contrast to AM. 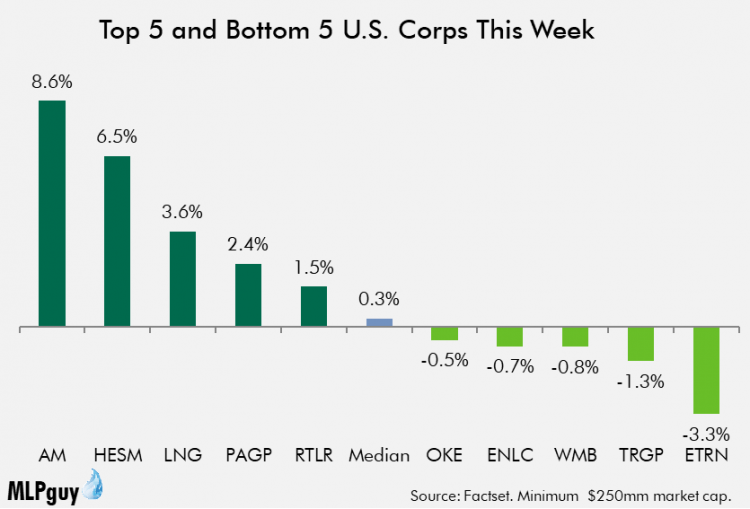 AM and HESM repeated in the top 5. TRGP and ENLC retreated a bit from last week’s gains, going from top 5 to bottom 5. WMB and ETRN repeated near the bottom. On the YTD leaderboard, AM is now positive including dividends. HESM climbed into 3rd place ahead of LNG. 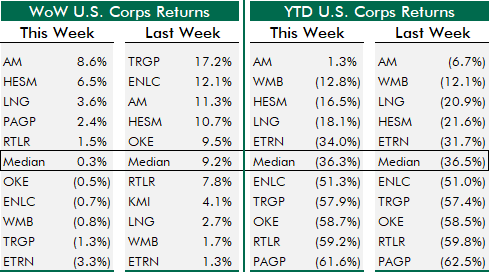 Canadian midstream corporations underperformed MLPs and U.S. corps this week. Larger names ENB and TRP held up better, with ENB getting a bump Friday from some positive news on the Line 3 Replacement project. 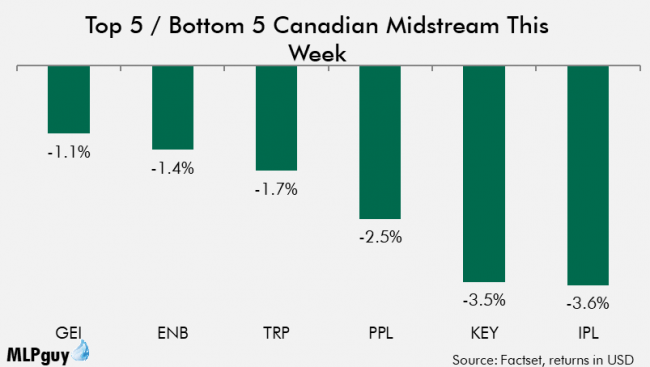 Week over week, not much to glean, other than GEI and TRP trade well in risk-on and risk-off weeks. On the YTD leaderboard, GEI still out in front, IPL still way behind, ENB still in the middle.

News of the (Midstream) World

Not much transaction news this week. There were some mixed updates on project permitting and a bankruptcy ruling that was not in the favor of the midstream operator. In addition, distribution announcements are starting to roll in. Nothing too exciting as we inch closer to 3Q earnings season. 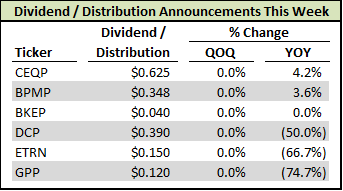 Editor’s Note: The summary bullets for this article were chosen by Seeking Alpha editors.

Many Workers Gave Up Looking for Jobs Across the U.S. in September

7 Ways to Minimize Your Risk in Growth Stocks

Meet the lawyers behind the U.S. versus Google antitrust showdown