Last month, Snowflake Inc’s (NYSE:SNOW) initial public offering had the tech industry buzzing, becoming one of the hottest IPO’s off-late. The company’s value shot up from $3 billion to over $80 billion in a few minutes. Investors are banking on SNOW stock and its meticulously engineered cloud platform, strong financials, and an attractive business model. However, its bloated valuation remains a cause for concern, which makes it not investable at this stage.

Could it grow into its valuation? Of course, but there will be some stiff challenges for sure. It is operating in an extremely competitive space with some of the world’s most powerful companies. It is still figuring out its path to profitability, whereas many of its competitors are already profitable at this stage. Snowflake’s platform is robust and unique, and the company has immense potential in scaling revenues for the foreseeable future. However, these risks cannot be ignored, and its unreasonable valuation doesn’t help either.

Snowflake’s fragmented architecture enables users to alter their cloud environment based on their needs. It enables the storage and compute aspects of the platform to scale separately based on customer requirements. Other companies usually combine compute and storage, where users need to pay based on the largest workload. Moreover, it allows for queries to be processed more efficiently using parallel processing.

Furthermore, the company’s cloud architecture uses a SQL database engine, which minimizes costs and results in faster processing. It offers a multi-cluster architecture that allows heavier queries to run efficiently and with fewer problems. Additionally, the company makes use of columnar databases, which are highly efficient in extracting data.  In terms of security, the system automatically encrypts data as security is embedded into the platform. Therefore, Snowflake’s product offering is unique and allows customers the flexibility they’ve been yearning for with their cloud solutions.

Snowflake’s financial performance has been impressive, especially its ability to grow its revenues. Revenues are up 133% in the first half of fiscal 2021, ending in July. For the fiscal year ending Jan. 31, the company grew by over 170%, with gross profit margins of 56.2%.  These margins have improved to 61.5% in the first half of the year.

However, the real problem for Snowflake is its net profits. Losses have doubled in the past couple of years, increasing to 348.5 million. The company has stopped the bleeding somewhat in the first half of the fiscal year 2021, with its belt-tightening measures. As a result, adjusted loss per share is 91 cents lower than the fiscal year ending on Jan. 31. Another encouraging sign for the company is its retention rate, which is at a record of 158%.

Despite Snowflake’s unique competencies, the competition is stiff and is likely to eat away at its market share. You have the more established service providers such as Amazon (NASDAQ:AMZN), Oracle (NYSE:ORCL), and Microsoft (NASDAQ:MSFT), along with cheaper alternatives such as Altinity. These companies continue to innovate and improve their products to gain more market share and customer satisfaction. Additionally, the more established companies are likely to grow faster with mergers and acquisitions. Moreover, companies such as MongoDB (NASDAQ:MDB) offer more specialized services such as the storage of data discarded from websites. 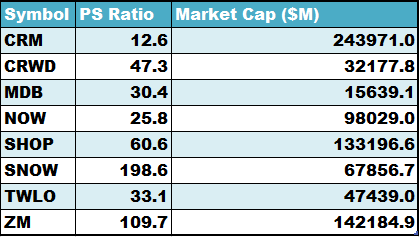 Another problem is Snowflake’s current valuation. From the table above, we can see that the company has the highest price to sales ratio, a testament to its bloated value. Such a ratio is unjustified compared to its current market valuation and the lack of profits. The difference between high and low estimates for SNOW stock is roughly 1.2 times its current price.

SNOW stock is an interesting play in the competitive cloud space. It has some unique features which provide it an edge over its competitors. Hence, it has enjoyed triple-digit growth over the past few years. However, with the growing competition in the sector, I expect these numbers to normalize with time. Additionally, its valuation is currently unreasonable; therefore, it’s best to wait for a pullback before investing in SNOW stock.

On the date of publication, Muslim Farooque did not have (either directly or indirectly) any positions in the securities mentioned in this article

Analysis: Green is the color of money for funds betting on a Biden win